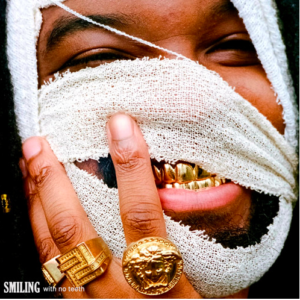 On his debut album Smiling With No Teeth, Genesis Owusu makes you believe you’re already intimately familiar with him. The Ghanaian-Austrailain singer wears an incredible range of influences on his sleeve so almost every song on the album’s tracklist has an uncanny nostalgic feeling on first listen.

The hypnotizing electronic opener “On The Move!” shows Owusu emulating Death Grip’s MC Ride’s aggressive delivery before slinking gradually into a Moses Sumney-reminiscent falsetto that clashes with the song’s frenetic instrumental. Elsewhere, Owusu brings to mind the theatrical sexiness of Bootsy Collins on “Waiting On You,” the anthemic nature of Bruce Springsteen on “Drown,” and brings a punk-rap combo that Slowthai exhibited on “Doorman” to songs like “Black Dogs!” Owusu shows off a range that Gorillaz can boast on Plastic Beach or Demon Days, while keeping the core of Smiling With No Teeth based in synth-heavy hip hop and pop. While Owusu brings more funk into the mix than Gorillaz, the more stunning difference is rather than bringing on a range of collaborators, Owusu brings all that range practically on his own.

Smiling With No Teeth would be impressive on vocal and musical range alone, but Owusu’s lyrics and songwriting affirm him as a voice of his own while tying the disparate ends of the project together. Owusu uses the recurring motif of “black dogs” to represent different parts of his experience as a Black person in Australia. Owusu says the on-edge punk song “Black Dogs!” “plays into how [he] feels every day, going into white spaces and feeling a bit paranoid.”

With all of the genre jumping, Owusu consistently brings a rebellious punk ethos to his music. On “Whip Cracker” Owusu shouts “I’ve been rockin’ rockin’ with my crew/we don’t fuck with neo nazi spew” just before a disco beat and funk guitar slowly fade into the mix. Owusu’s skills as a rapper are on full display on “Easy” where he delivers passionate and eccentric verses railing against colonizers in the form of a metaphor describing an abusive relationship.

On the album’s last three songs Owusu sums up his simultaneous feelings of optimism, cynicism, and determination. “A Song About Fishing” feels cathartic even with its more-than-melancholy chorus “Rise and shine, to dawn I wake/casting my net in a fishless lake,” sung in a beautiful baritone. The dark and foreboding closer “Bye Bye Bye,” leans into the biblical themes that run through the album. With lines like “Am I a shell of what I left/A saint forever marked by the devil’s crest/Hands around my throat praying for a breath” Owusu shows that his struggle is larger than his own. The fight against racism is one of biblical proportions and it’s one that people face every day.

All the on-a-dime genre switching of Smiling With No Teeth could have come off as gimmicky, but Owusu backs up each sonic shift with deeply emotive, personal and poetic lyrics that compliment the dramatic shifts in tone. Even though Smiling With No Teeth is constantly in sonic flux, Owusu uses these shifts to make the many sides of his anti-colonial and anti-racist message direct and crystal clear.