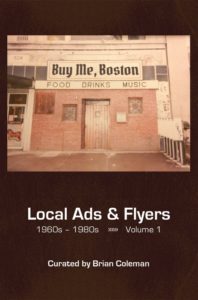 For longtime locals and recent transplants alike, a shadow of what once was casts itself upon a walk around Boston today. Still remaining through the years, however, is the familiar sight of flyers posted up on anything they stick to. Though they may be hard to miss around the neighborhood in the lead up to the listed event, what becomes of those flyers after the event passes? What becomes of the memory of these times and places‽ In the moment mindsets often include a lack of aforethought for archival preservation, creating challenging gaps in a community’s history. Fortunately, seasoned hip hop historian Brian Coleman has assembled a fascinating window into a Boston from before in Buy Me, Boston: Local Ads and Flyers Volume 1, published on his own Wax Facts Press. Buy Me, Boston pulls from several sources to present a true mosaic of earlier Boston culture with particular emphasis on the former incarnations of Boston’s music scene.

Currently in limited release at local shops (Brookline Booksmith, Tres Gatos, Bodega, etc.), Buy Me, Boston will have its launch event November 11 (the day after HASSLEFEST!) at Brattle Theatre in Cambridge. Along with a slideshow of selected images from the book, Coleman will moderate a panel featuring David Bieber (WBCN, Boston Phoenix / WFNX, The David Bieber Archives), Prince Charles Alexander (Berklee College of Music), Blowfish (Boston Groupie News), and Dart Adams (Dart Against Humanity podcast). This can’t-miss multimedia extravaganza will have its cake iced with an abundance of rarely seen video, including punk and new wave show footage, the 1985 Rock Against Racism documentary, and some choice finds from Kiss 108’s archives.

To help start the celebration a bit early, Boston Hassle caught up with Coleman recently to discuss Buy Me, Boston ahead of the big event. 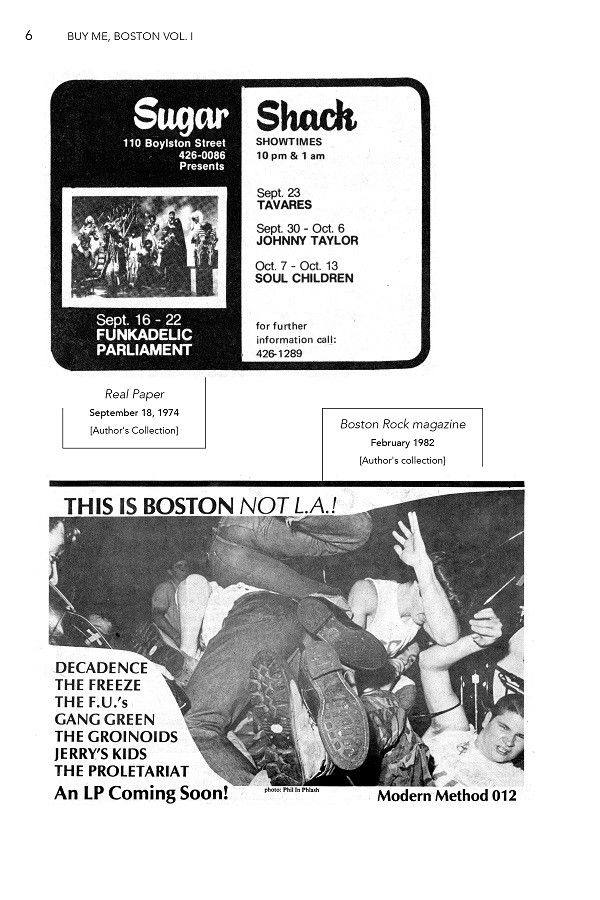 BH: What were some memorable challenges or lengths you had to go to find/obtain archival materials?

The two main people I leaned on for this volume were David Bieber and Kay Bourne and they were both ridiculously generous in allowing me to not only see their archives but also to borrow materials for a week or two at a time to scan them myself. This would never happen with a university archive and I was very aware of this and never forgot my good fortune. That’s why I jumped at the chance with the access (and friendship) I had with these two amazing individuals. The book definitely couldn’t have happened without them, and several other amazing people – Wayne Valdez, Chuck White, Reebee Garofalo.

When it comes to memorable, I can still remember the first time I walked into the David Bieber Archives when he moved them to Norwood, I believe it was early 2017. It is pretty much like that final scene in Raiders of the Lost Ark, just better lighting. It honestly takes 4-5 visits until you get over the sheer magnitude of stuff in there. Then you can really get to work. 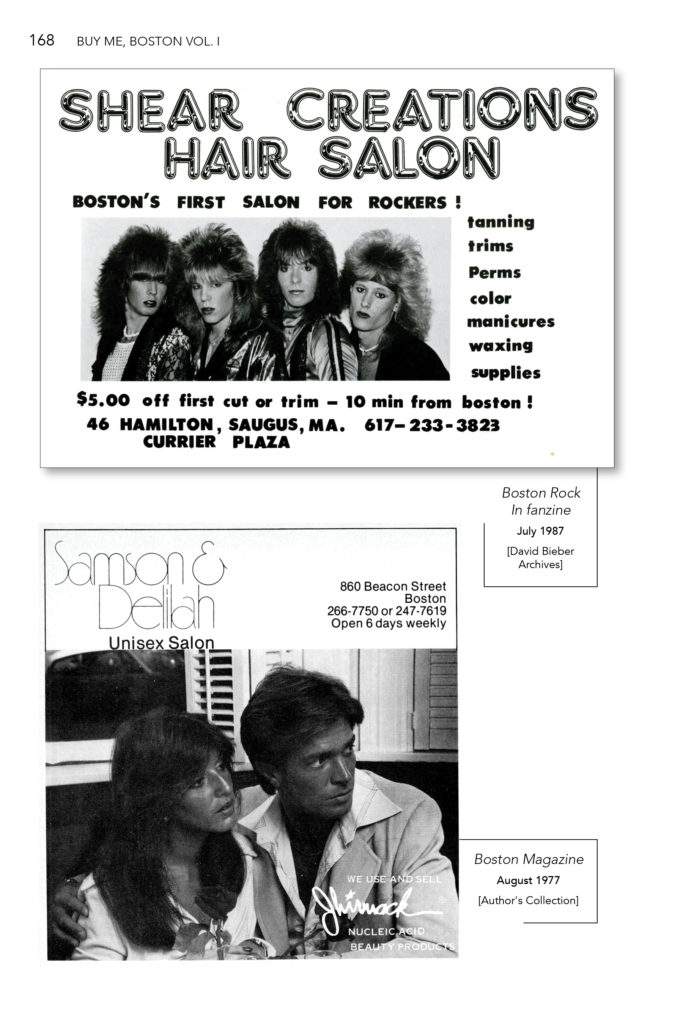 BH: Did the way you look at places you’ve built your own memories on change after going through a few decades’ worth of flyers? Did you rediscover places or bands you hadn’t thought about since then?

Coleman: I think that, if anything, I just gained more respect for some of these places. For instance, I always loved going to shows at Nightstage in Central Square, which is sadly long gone. But I had no idea that it had at least two different lives before it was called Nightstage – as “The Club” (‘80s) and also the “Two of Clubs” (‘70s). I have ads from all three generations / iterations in the book.

And then there’s a club like the Western Front, also in Central Square, also now gone (condos, gross). That existed for decades, and I also tried to highlight that span in the book.

In the end, it makes me want to appreciate places that I love now, because as you look through all the old ads, over time you can see how things change and how great places morph or – more likely – disappear. Hopefully readers will have the same takeaway. 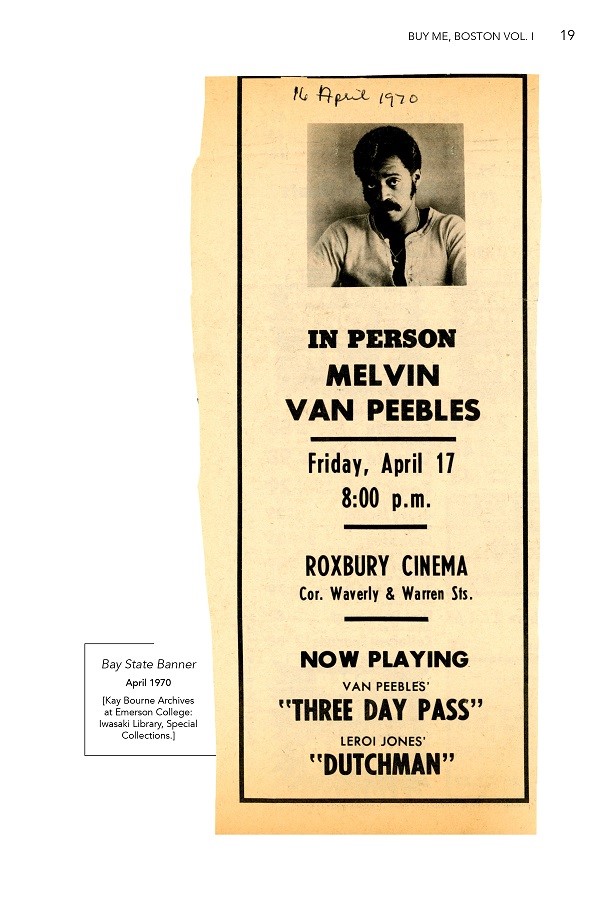 BH: In selecting images for inclusion, how were you able to narrow down from such expansive archives?

Coleman: Aha, yes, that’s the big question. And the answer is – it was impossible, so I didn’t try to overthink it. The book, on purpose, is fun and stream-of-consciousness. It’s not academic, it’s not intended to be comprehensive. It’s a bunch of snapshots of a town that doesn’t exist anymore.

I always viewed this as a multi-volume thing, too, so I didn’t feel any pressure to get everything in for this first one. I guess that’s one good thing about self-publishing and editing yourself – no one else is breathing down your neck.

But the one thing I tried to do was achieve some kind of balance with my selections: making sure that it went way beyond music (my big passion in life); not just one side of the river or the other; not just high-brow or low-brow. I tried to include a lot of things outside of my own experience, which I think is important as an archivist, even though I am an amateur one. It’s not just a Boston problem, but honestly I usually find with historical projects that people do about our town, they only see through their own limited lens and sphere of influence. I tried to do the opposite.

BH: How has Buy Me, Boston’s reception seemed to you during this low key pre-release phase? I was pleasantly surprised to be met with such rave word of mouth when initially mentioning it to some friends myself.

Coleman: Honestly, I have been kind of overwhelmed with all the positive words about the book in the current “soft launch.” Then again, I’m not surprised. And I definitely don’t say that to be arrogant – whenever I do a new book (this is my fourth) the most important question is, “Would I buy this?” If the answer is no, then you’re crazy for even attempting it.

As I tell people, if you are 40 – 70 years old and grew up in Boston, this book is kind of like an Appendix to your family album. Or at least that’s the way I intended it to be. And if you are younger, or aren’t from town, as you thumb through it, it hopefully makes you want to learn more about what went on, and this gives you a bit of a chance to do that without feeling overwhelmed.

BH: This first volume covers the 1960’s to the 1980’s. Will volume two expand upon these eras or continue into the 90’s onward?

Coleman: I definitely have at least two more volumes just for the ‘60s through the ‘80s, then I can start to think about the ‘90s. 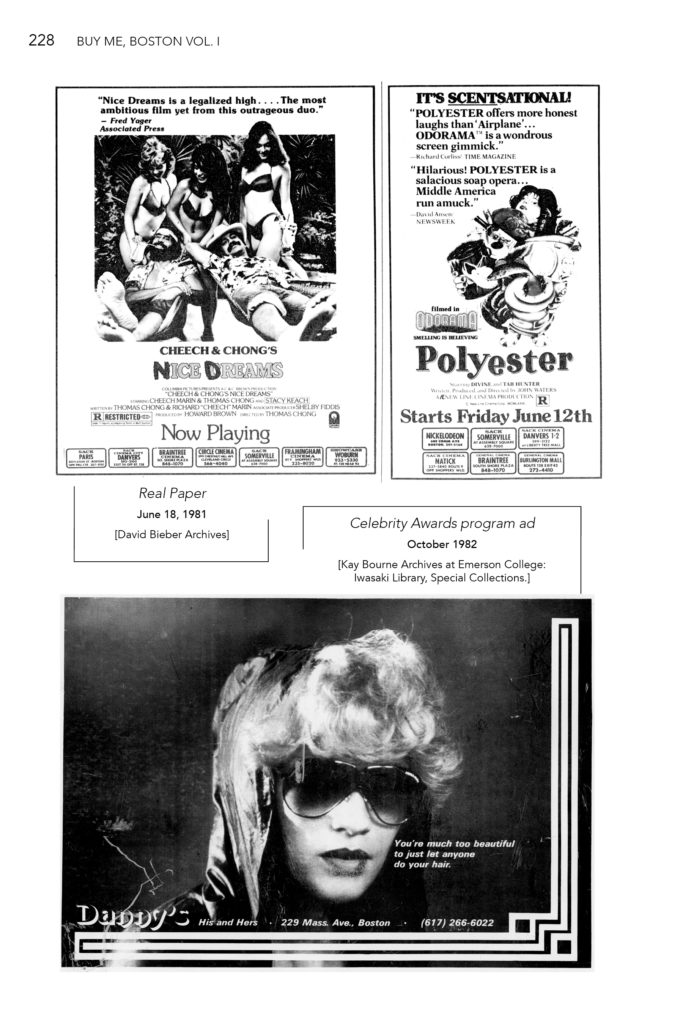 BH: Have you visited any defunct sites covered in the book to see how much they’ve changed since coming across the flyers?

Coleman: I walk or drive by places all the time and sigh to myself. I mentioned Nightstage earlier, I just walked by the old location (the building is entirely gone now) the other day and smiled, remembering some amazing shows I saw there.

I live on the North Shore so I also go to Route 1 often – I still go to Kowloon often (I *had* to put one of their ads in the book) and drive by what used to be the Hilltop Steakhouse. It makes me appreciate Kowloon, for being around for so long. 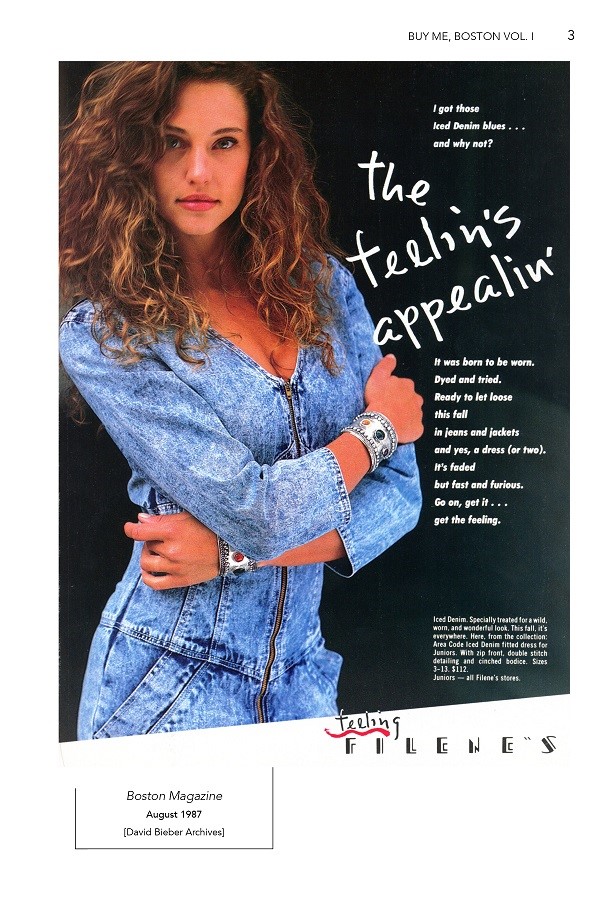 BH: Do you have a favorite show you remember attending featured in the book? Perhaps fondly remembering getting a good deal at an advertised sale even?

Coleman: There’s a T.D.S. Mob flyer in there for their 12-inch release party from 1988, I went to that performance and I’ll never forget it. They are such an important group and have been mostly forgotten, but back then I was convinced they were going to eclipse every big rap star of the day. The fact that they didn’t doesn’t diminish them in my mind. But I love everything about that flyer – the design, and the fact that I still remember them performing on the sales floor, in front of hundreds of CD “longboxes”! 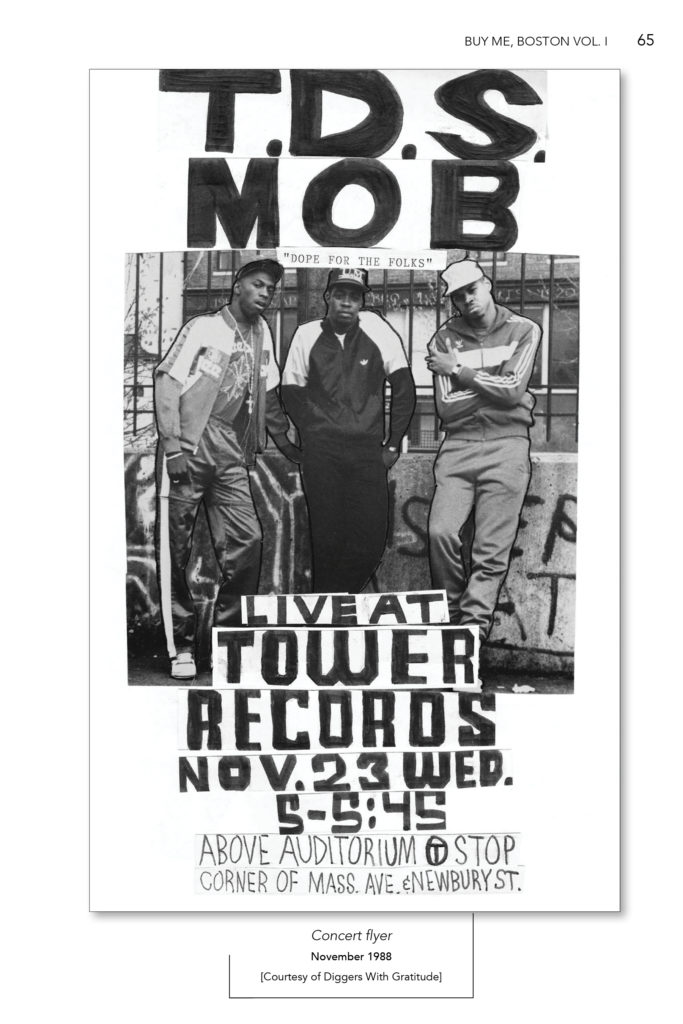 BH: Have you identified any flyers for events that were known to be cancelled or substantially different than advertised in some respect (e.g. venue change, incorrect date, band name, etc.) ? If so, was there a secondary consideration to sort out which events may have not occurred?

Coleman: That’s a great question. I haven’t found a ton of those, but I did run across one and as a result I didn’t put it in the book. It was a Jimi Hendrix show on the Boston Common. I had the ad for it and then, as part of another digging session, I found an article that said it had been cancelled. I might use it in the future, but for this time around I used another Hendrix ad, from the Boston Garden.

There’s another concert that I will do more research on in the future – a three-part series called Uptown In The Park at White Stadium in Franklin Park, in 1974. I have scanned a couple different flyers for it, with some different names that don’t match up. I need to talk to people who were there, or articles afterwards, to figure it out. But those ads were too cool to *not* use! 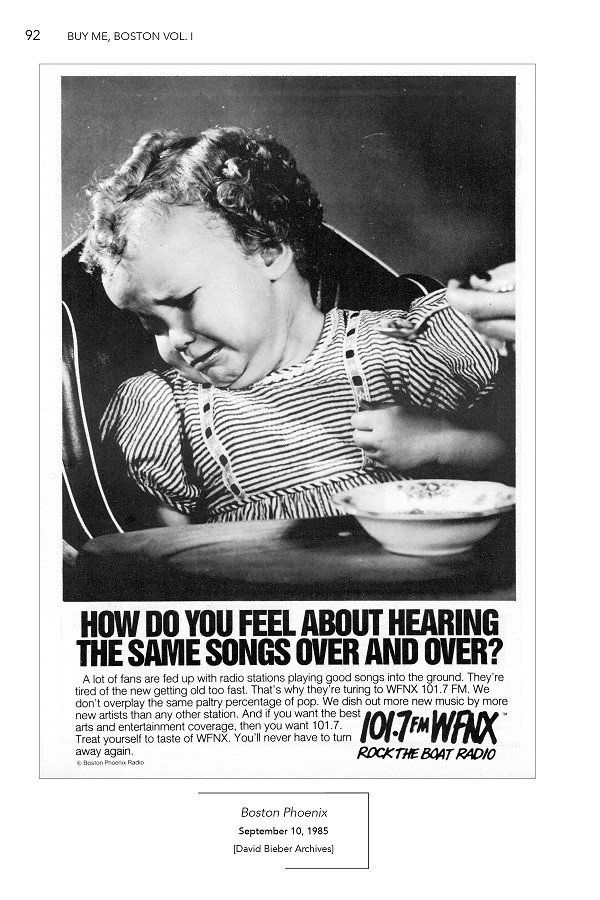 BH: What experience do you most hope to capture at the November launch event at Brattle Theatre?

Coleman: Well, my book is a hodge podge and a bit of a (hopefully) beautiful mess, so I am assuming that will be the way things will go on November 11 at the Brattle. I will have a certain number of things planned but won’t freak out if everything gets changed around. In the spirit of the immortal Billy Ruane, that’s the way it should be.

What I do hope happens, though, is that I properly show all sides of our awesome city. On the video front, I’ll have a bit of everything and most of it will never have been seen before on a big screen. Plus the panel will be something where I’ll just be honored to be in the same room with the guests – David Bieber, Prince Charles Alexander, Blowfish from Boston Groupie News, and Dart Adams. 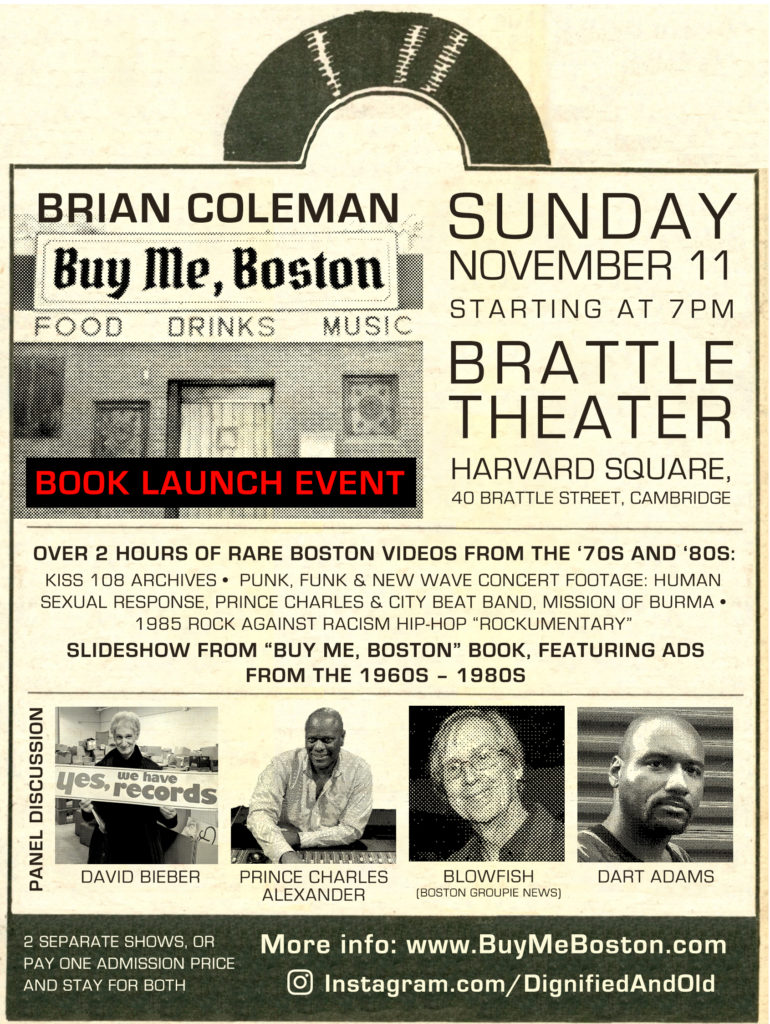 Liked it? Take a second to support Tom Faix on Patreon!

It is 2022, and the world is in chaos. A mere three years ago, all of our lives were radically different. It…