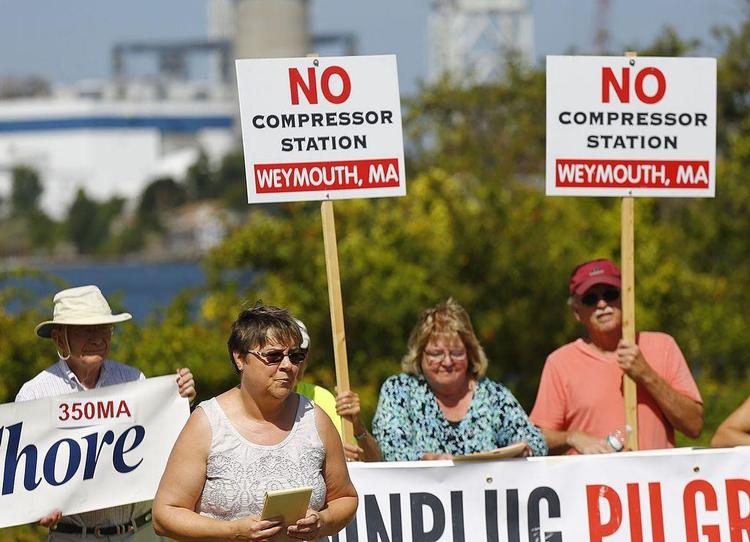 Greater Boston is slated for a new natural gas pipeline with a compressor station located just a few miles outside of the city in North Weymouth just over the Fore River from Quincy. Because of the inherent dangers of Natural Gas Compressor Stations they are usually built in unpopulated ares. They are a known source of air pollutants associated with the risk of diseases like cancer and asthma. More alarmingly they also have the potential for large scale disasters like fires and explosions. Despite community opposition Texas-based Spectra Energy, now merged with and known as Enbridge, is forging ahead with it’s proposal to build an 18,000 horsepower Natural Gas Compressor Station with a pipeline running through the town of Weymouth, a densely inhabited area of the South Shore. Now being permitted, the compressor station is unprecedented in it’s plan to be sited near such of concentration of human beings. It has been called the worst siting in history.

The scheme is to move fracked natural gas through a pipeline up to Canada that requires it to be pressurize at compression station facilities along the way. An emergency evacuation zone includes nearly the entire town of Weymouth that has over 55,000 residents. More concerning is the ominous Incineration Zone. In the case of an explosion, anything within 1000 feet of the exploding pipeline would be immediately incinerated, turned to ash. The pipeline, as planned, runs down main streets past houses, apartment complexes, elderly housing, shopping centers, churches, over commuter rail tracks and is nearby many schools. There was a Spectra pipeline explosion in a largely rural area of Pennsylvania in 2016 that reportedly left a hole in the ground 12 feet deep, scorched 40 acres of land and was felt 6 miles away. If this happened in the town of Weymouth it would be catastrophic.

Even if no accidents occur, the locals can expect regularly scheduled and emergency “blow-downs” from the compressor station where copious pollutants are released in plumes that can can shoot 40 to 60 meters into the air and last for hours to what sounds like something akin to a jet engine. It smells like rotten eggs. Even more disturbing will be the ongoing invisible emission of toxins into the environment. A video on YouTube is claimed to show a compressor station during normal operation. The footage shows an uneventful sunny day but when subjected to thermal imaging the video appears to reveal the unseen hellish spectacle of airborne industrial waste flooding out into the open lapping the sky like the blaze of a wildfire. (search YouTube: Minisink Compressor, angle 2 of 4 with FLIR GasFindlR) If this were visible to the naked eye no person of good conscience would allow it. There are nearly a thousand homes with hundreds of children who live within a half mile of this proposed plant. More than 3,100 children go to school or daycare within one mile of the site on a daily basis. Air quality in the area is already compromised by a concentration of industrial facilities. Independent environmental air quality assessments report 15 toxins, 8 violating state standards multiple times over. They detected benzene at .88 ppn, more than four times higher than the maximum set by the state. Anyone who is elderly or has respiratory issues or children should be very concerned. Some are calling this area Boston’s Sacrifice Zone. See the shocking documentary Gasland for the devastating effects of fracked gas on families on the other end of the pipeline and how the push for natural gas came to be.

Why is this occurring? It may have something to do with the perceived political power of Weymouth and Quincy, largely working class, blue collar with Quincy being home to a large and growing immigrant population. Some find it doubtful that this compressor station could ever be so easily permitted in the city of Boston or in the more affluent neighboring towns. Although the permitting process started in 2015 the current federal administration’s deregulatory fever seems to have hastened the process. A key permit was curiously obtained apparently skipping past the normal proceedings because of several vacancies on the Federal Environmental Regulatory Commission (FERC) left unappointed by the federal executive branch. On the state level, there seems to be a cozy relationship between the regulators and the regulated. A former Undersecretary for The Massachusetts Office of Energy and Environmental Affairs (EEA) represented Spectra in the permitting process, in front of the very same agency he once worked for many years. In a truly brazen unethical act, the Mass Department of Environmental Protection (MassDEP) allowed Spectra not only access to but to make edits to the draft air permit for the project before it was made public. And where’s Charlie? Massachusetts Republican Governor Charlie Baker seems to be doing some inexplicable sidestepping when it comes to opposing the compressor station stating that it’s a federal decision like there is nothing he can do. This is being shoved through with limited public say and input. Residents of West Roxbury recently lost their pipeline battle with Spectra despite community protests and strong opposition from elected officials.

Many feel that this is part of a greater effort by the powerful forces of the fossil fuel industry and Wall Street to build infrastructure in a concerted effort to lock us into fossil fuels for another generation that will only increase greenhouse gases surely threatening all living things. The affluent people who hide behind these faceless corporate entities have placed their bets on Natural Gas. The world is their casino and now they want their payouts to continue well into the 21st century. Profits over people. Profits over planet. One local attorney engaged in the legal battle said “This is one town against multiple Fortune 500 companies”. Should we allow this when we could put our efforts into renewable energy?

What can you do? Tell people, especially people who are concerned and active around environmental issues. Alert anyone you know who lives in the communities most affected Weymouth, Quincy, Hingham, Braintree (this is projected seriously affect the current gas service in Braintree) and also Hull, Milton, Dedham, Brookline, Cohasset, Scituate, Randolf, Rockland, Holbrook, Abbington, Norwell, Canton, Stoughton and Boston especially in the neighborhoods of Dorchester, Southie, JP, Roxbury, West Roxbury, Roslindale, Mattapan, and Hyde Park.

The potential for a fiery catastrophe aside, this effects the quality of the air we all breathe. The Mass Department of Environmental Protection was accepting public comments on air quality through June 7th (but there was talk of this deadline being extended). The nocompressor.com website that has more information and a plan of action. Contact Elizabeth Warren, Ed Markey, Charlie Baker, Maura Healey and your local representatives right now. Join the Facebook and Twitter groups coordinating efforts in opposition. FAS – Families Against Spectra. Opposition takes the skilled effort of hundreds of people, organizations and money. You help decide for the future when you choose to take action or not.

Liked it? Take a second to support David Phaed on Patreon!

Still waiting for the T: