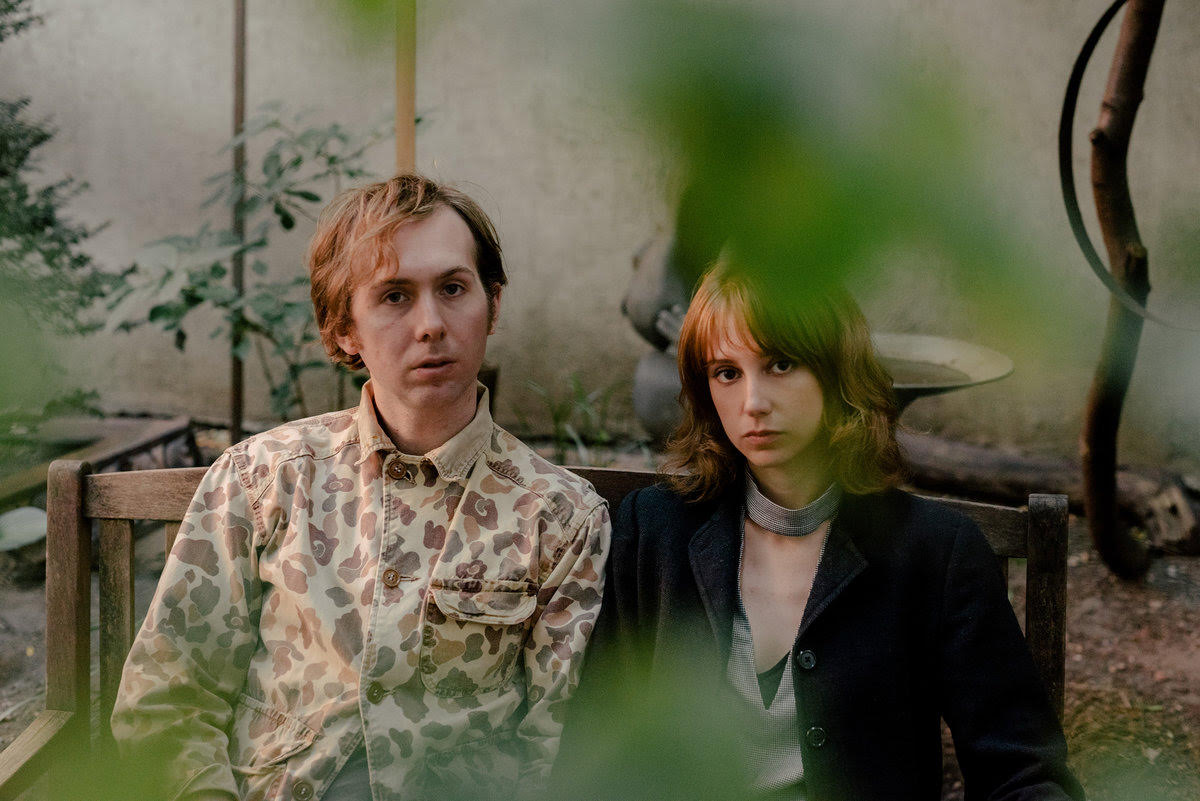 Olden Yolk’s Shane Butler grew up in the Boston scene and toured for 10 years as guitarist and vocalist for Quilt. His new project with Caity Shaffer has some of that same ’60s psychedelia and chill swirling energy. Their beautiful self-titled record, released in February by Trouble in Mind Records, has coincided with quite a bit of touring, coast to coast and to Europe, with more on the horizon. I reached out to Olden Yolk to find out what some of their favorite stops have been so far, what their dreamy songwriting process is like, and if they would say nice things about places in Massachusetts, which they did.

Boston Hassle: How did this project come about? Other reviews say you’re both NYC natives–have you known one another for a while?

Shane Butler: This project has been happening in different forms since around 2012. At first it just existed as a way to self-record some music and release it along with specific art works. Caity & I met in Texas a few years back and shortly afterwards decided we would turn the project into a more full-on thing. I’m from NYC — Caity is actually from Philadelphia. We just wrote our first full-length while living in New York — so that tag is on us now.

Caity Shaffer: In our teens, Shane and I actually lived close to one another while he was enrolled in boarding school in Pennsylvania. Fifteen minutes driving distance. He went to the Quaker high school that I really wanted to go to. We even had mutual friends, but for some reason just never crossed paths. So when we met in Texas, and all of this clicked for us, I felt like I’d made an instantaneous friend. After that, we started keeping in touch, sharing poems and music, and eventually decided to collaborate.

BH: You’ve toured extensively on this release already–what have some of your favorite gig spots been so far?

Shane: Really loved playing in Cologne, Germany; London, UK, and Paris, France across seas. Also, recently had a great run of dates in New York, Boston, and Philadelphia – where we’ll be coming back to later this month. We’re really still at the very beginning of our touring… on this tour we had a blast playing a house show in Hadley, MA at The Asbestos Farm. House shows are so special – a vibe that you’ll never quite nail down at venues – so, we felt pretty fortunate to land such a good one with good people out there. Reminded me a lot of the house show scene in Boston 7-10 years ago that I grew up playing in. Such a special energy.

Caity: It was an honor to play Café Oto in London with our friends Tony, Caro, and John. Some groundbreaking artists have set foot in there. Espace B in Paris was an exciting show, too, along with a handful of other dates in Europe. It was just Shane and I performing for the EU tour and our sets were a bit mellower, so I appreciated the occasional conversational shouting at certain shows (especially in Paris).

BH: What is the songwriting process like for you? How different/the same do things end up when you’re practicing them vs. recording?

Caity: Increasingly we’re loosening our set by adding a mix of interludes and other sounds, making room for ourselves to explore new possibilities through improvisation and what have you. I think Shane started rapping/scatting two nights ago. He called that “sound check,” but seemed pretty invested—

Shane: Each song really has its own process. Songs always come to you in different ways. The other night I was just staring at the full moon and noticed the blue ring that was surrounding the white center — and as I really stared at the blue ring an entire song just flooded into my mind. It’s been stuck in my head for the past 3 days on tour – so, that’s annoying . Haha. It’s amazing that even when you really like a song, when it just repeats in your head endlessly it drives you nuts. But, I’m excited to play it / record a version of it soon. Often Caity or I will come up with a general vibe of a song, sections, and lyrics and then we will arrange it / form it together. Once the song has its shape we start to play it with the band and allow subtleties and improvisational sections to take place. After cooking it like that for a while we make the recorded version. Then when we start playing them live they start changing a bit again… so, they’re always kind of alive.

Shane: Well, Quilt toured for close to 10 years. So, it had many different ebbs and flows. We started that band when we were little babies — still in college. Those guys are some of my best friends in the world. That’s where we all really learned how to tour and be in a band, etc… Olden Yolk is still really fresh so it’s hard to say exactly how it’s different — because touring with Quilt was always different at different times as well. That being said, it’s been such a blessing to play with Caity and travel with her and the other dudes. The tour so far feels really great. We’ve got such great players in our band: Peter Wagner, Dan Drohan, and Jesse DeFrancesco.  It’s also been really nice having a little bit of forethought about how to tour on a new project versus figuring it all out for the first time. It makes some things a bit easier / less scary. I remember being so confused / not knowing what the hell we were doing for like the first 5 years of playing with Quilt…haha. It’s a bit different now.

BH: I saw you’re on the lineup for Otis Mountain this year–always a good one. Are you excited to see anyone else playing?

Shane: Yeah that will be fun! I actually don’t know too many of the bands who are playing. We’ve seen The Shacks before – they are a great live band. I love watching the bassist play, she’s a super talented player. So, looking forward to that and being in the mountain air.