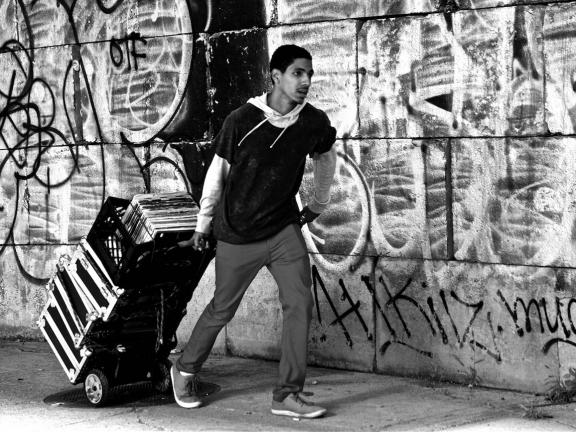 There’s something special about an independent film about an underdog story. Given that, in most cases, an independent film’s very existence is an underdog story, these films tend to have an especially personal touch. Such is the case with Wheels, the story of a teenage DJ trying to make it in Brooklyn, which plays tonight as part of the Roxbury International Film Festival. Wheels is the brainchild of Paul Starkman, a veteran reality TV director who decided to chuck it all to pursue his filmmaking dreams. On the eve of Wheels’ Boston debut, we spoke to Starkman about his film, as well as the power of dreams, music, and determination.

BOSTON HASSLE: For the uninitiated, what is Wheels about?

PAUL STARKMAN: Wheels is a story about a young DJ in Brooklyn, named Max, who is trying to make his way and become a radio DJ. He works in a supermarket and takes care of his sick grandmother. When Max’s brother comes home from prison, Max has to face their relationship, in order to allow himself to move forward in life, and fulfill his dream.. Wheels is a metaphor for life — what path are you going to take? Max has a positivity in him, and we learn that sometimes it takes outside forces to challenge your character, in order to believe in yourself and gain a voice.

BH: How did this project come to be?

PS: I first came up with the idea for wheels 25 years ago when I was studying film in California. I would record Stretch and Bobbito’s radio show every trip home to Brooklyn. I’d stay up all night flipping tapes, and then take the tapes back to California and wear them out. They had the newest of the new, artistic voices and hungry talent. I grew up on rap and hip hop, and I always love underdog stories, coming of age stories, and New York films. Films where central characters are trying to find their way, in whatever capacity that might be: Rocky, Do The Right Thing, Saturday Night Fever, etc. I had the idea to combine all these elements to tell the story of a young DJ trying to make his dream a reality, but must grow and reconcile his family problems to believe in himself. Cut to 25 years later. I’m working in TV– reality competition– watching other people put out their passion in front of the camera, to realize their dream. I realized I needed to follow suit. With the help of my wife Cheryl, I decided to embrace my passion for movies and put fears aside, get out of my own way, and make my own desire come to fruition. I launched a Kickstarter and asked every friend, family member, and co-worker to pitch in and help me make this film. They did, and Wheels came to life.

BH: Were you at all involved with the DJ scene prior to making this film, or did the story draw you into it?

PS: I would go out dancing and listen to DJs, but I was never involved in the scene. I love DJing, in that when a party has the right flow, and when the right pieces of music are brought together, there is an energy in the room that you can’t get anywhere else. There’s something magical and special, and a DJ controls that. I thought combining this passion of music and the story of a young character, Max, who has to face problems at home in order to make way for his passion, was something I wanted to explore. It’s one thing to pursue a goal, but when personal life gets in the way you can become angry, and that anger can hold you back. How do you gain your footing and take control?

BH: This is your first feature film, but your resume includes a good deal of shorts and TV work. What advice would you have for someone just starting out as a filmmaker?

PS: I always wanted to make movies since I was a kid. I knew it at a young age. I always loved movies. I went to school and studied film– first at UCSB, then AFI in Los Angeles. I started working in documentaries, and then in TV for the past 20 years. You can say I got off course, but really it was all preparation for where I am now. I would say, “You can do it. Go for it, there’s no right or wrong way. Try, experiment – make stuff, the way you see it, there is no perfect. And most importantly, keep going. Don’t stop, believe in yourself and ask for help.”

BH: What’s next for Wheels?

PS: Wheels is on a festival tour. We are honored to be playing here at the Roxbury International Film Festival now, and we will be screening at the New Hope Film Festival in Pennsylvania, and then the Martha’s Vineyard African American Film Festival in August. We are currently seeking distribution. We feel very lucky to be able to share this story all over the country.  After every Q&A, I always feel like Wheels ends with the audience wanting to know what’s next with the characters– where will they go? The hope is to keep audiences asking. Then I know we did something right.