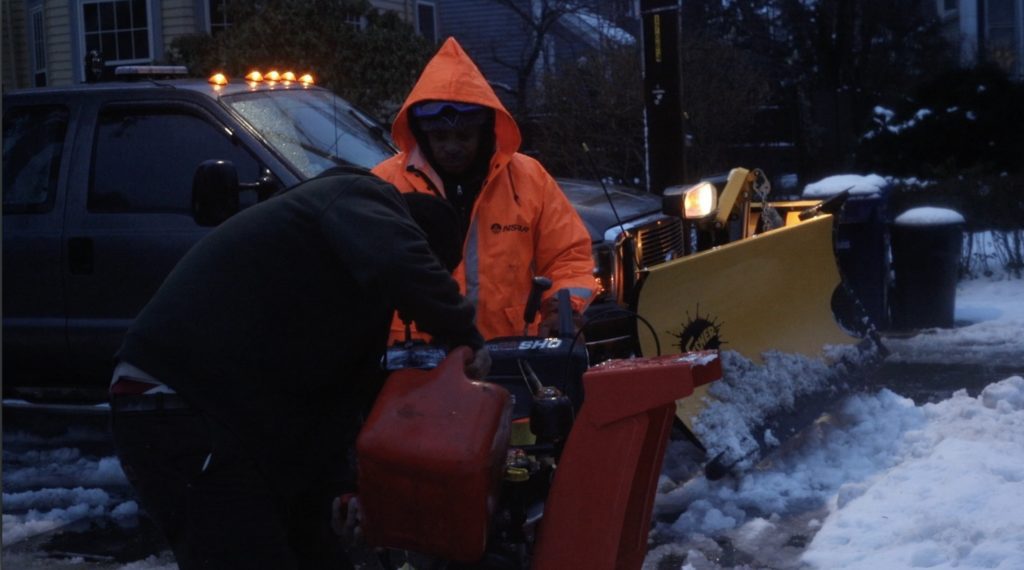 When we think about climate change, we tend to think about the various big-picture cataclysms which are headed our way if we don’t get our act together soon. But it’s easy to forget that climate change is affecting ordinary people right now, in ways both minor and profound. For Joseph Di Dominici, the subject of Kristen Chin’s new short documentary Snow Money, the toll is financial and concrete: a construction worker who moonlights as a snow plower in the lean winter months, Di Dominici has found business drying up with the alarmingly decreasing annual snowfall. On the eve of Snow Money’s free, in-person screening at Cambridge Community Television, I spoke to Chin about the film’s origins, and what we can do to ensure a future of snowy winters.

BOSTON HASSLE: What led you to make Snow Money?

KRISTEN CHIN: It was in a conversation with one of my master’s program advisors, Greg Marinovich, that he suggested researching this idea. We wanted to make use of my undergraduate degree, which was in Environmental Policy. In our conversation, he said, “You know, I’ve never seen anything done from the perspective of a snow plower.” I did some research, and he was right!

I love doing things that have never been done before, and I saw this as an opportunity to do that. I spent several months calling 20-30 snow plowers in the Boston/GreaterBoston area. Most of them have no interest in speaking to a journalist. As I was about to give up, I happened to see a listing on the neighborhood networking platform Nextdoor.com for a snow plower and someone posted Joe’s information in response. I called him up and he spent half an hour on the phone with me sharing about his life. I went to visit him and we hit it off – I knew at that moment that he was going to be my subject.

BH: Did making this film open your eyes to other effects of climate change?

KC: It made me realize that climate change doesn’t have uniform effects on the world. Yes, the overall climate of the globe is warming, but it leads to different impacts depending on where you live. Given Boston’s proximity to the ocean, they actually predict more snow, but it will be wetter and more unpredictable. So, some snow plow operators are thrilled because they have the appropriate equipment. It can be more challenging for small business owners like Joe, however, who don’t have that equipment and for whom it will be really costly and risky to invest in that equipment.

There really isn’t a uniform prediction that we can use to say what will or won’t happen depending on climate change, so I think it’s going to be really important as journalists to capture the diversity of stories.

BH: What surprised you the most while talking to Joseph?

KC: Ha! So many things. One surprising (and incredibly helpful) factor is that Joe has always wanted to be an actor – and this was an opportunity for him to be on camera.

BH: Do you have any other projects in the works?

KC: I do – I’ve been pitching and am now developing the idea of making Snow Money into a series about how blue collar workers in New England are impacted by climate change (editors, please get in touch if you’re interested in a story like this!).

BH: What can viewers do to help take action against climate change, or to help those affected by it like Joseph?

KC: That’s a great question. I think the most critical actions we can take right now are to vote and voice demand for climate policy. Equally as important, and what I try to evoke in the film, is maintaining the idea that climate change is impacting people now, and not to treat it as a far-off threat that will occur “someday.”