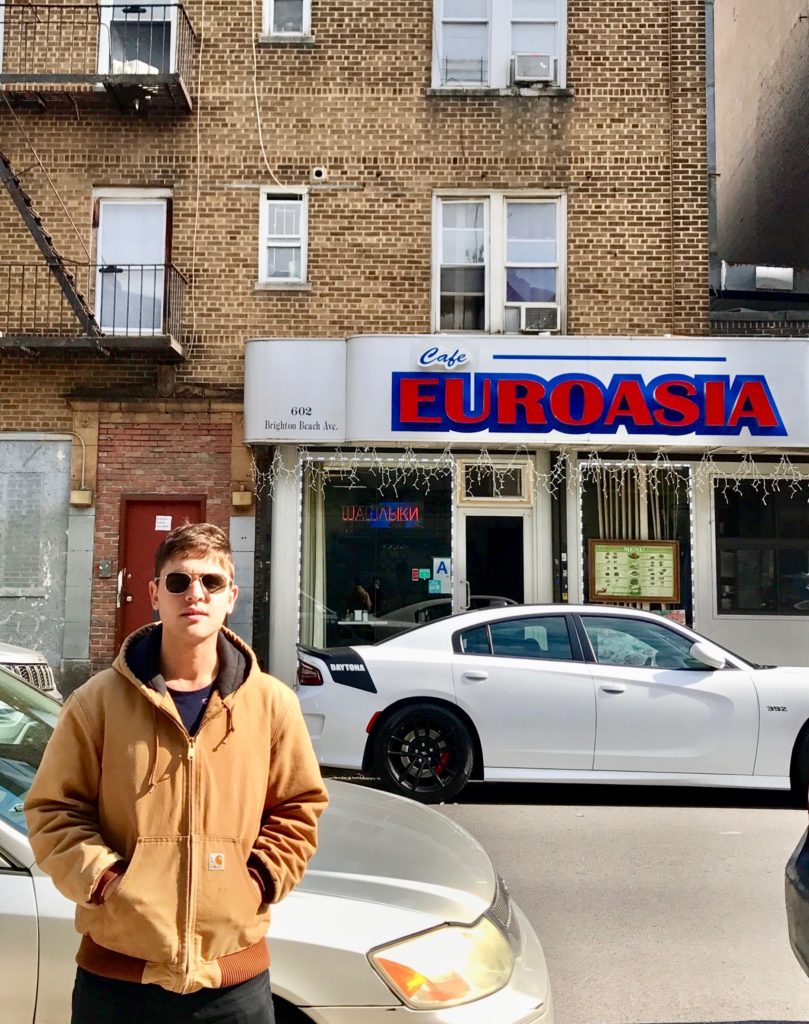 There’s a reason why the block between Dorchester Avenue (yes, there’s a Dot
Ave in Brooklyn) and Cortelyou Road in Flatbush has been officially dubbed ‘George’s
Way’. Nestled among the auto shops and SIM-card dispensaries of this industrial
thoroughfare is George’s, a classic 24 hour eatery serving up some of the finest
omelettes, coleslaw and pickles to be found in the borough. Nearly every person I’ve
dated in the past year and a half has been coerced into enduring the scowl of that one
waitress with the thick South Brooklyn guile, and to watch me inhale more than my fair
share of fries and bottomless coffee. And while none of those relationships amounted to
much, at least they got a free meal out of it.

My friend Granata and I drove to California and back this summer in an ill
advised mad dash. We only had three weeks to do it, so most days were spent driving
hundreds of miles, through the scorched earth of the desert on I-10 or the flat green
nothing of the midwestern plains. When we finally reached LA, energy was low. We
were exhausted from the heat (a distant memory now as we all collectively trudge
through another northeast winter) and in need of rest and solace. Lucky for us, we were
welcomed into the East LA warehouse dwelling of one Sam Rogich. You know, Sam
Rogich? From Boston heroes of yesteryear Designer. Well, Sam has jetted west, and is
fucking killing it out there. We couldn’t have dreamed of a better host to welcome two
weary wanderers into the loneliest of Lalas. Sam took us out to the beaches of Malibu,
the green of Echo Park and to culture hub Zebulon where I saw what’s his name from
Black Dice macking on some young ladies by the bar. But of all of the glittery wonders
Sam shared with us, none compared to Avenue 26. Nestled in an industrial back alley
somewhere in East LA, Avenue 26 is a row of carts that serve delicious tacos at a rapid
clip until the wee hours. A few beers deep and a little swimmy from that thin desert air, a
late night taco (or 4) can really bring you back down to that warm place that exists
somewhere between here and dreamland. Thanks Sam, see you soon buddy.

I was fortunate enough to spend a good amount of time on the road this year.
Two northeast tours and a cross country drive left my 2005 Prius with a fatter odometer
and an impressive nationwide spread of moving violations. On a tour this past July with
Mishpokhe Klang, a bout of hunger led us to stop at the local Waffle House in the quiet,
rural town of Elkton, Maryland. As northeasterners, we don’t have many opportunities to
enjoy the bounty that Waffle House has to offer. There is a slightly eery charm in this
corporate facsimile of the classic diner. A carbon copy slice of kitsch Americana, so
metareferential in 2018’s American landscape as to barely recall anything but itself.
Cardboard like slabs of hashbrowns, rubber eggs, leathery bacon. It’s the memory of a
Rockwellian nightmare, the ghost of time itself. Plus, stealing their coffee mugs is
apparently something of a national pastime south of the Mason Dixon line.

There’s a reason why I’m combining these two fine purveyors of South Brooklyn
wallop in one endorsement. After a night of responsible drinking at Kensington’s finest
Starlite Lounge, what better way to wash down the carbs than a perfectly executed taco
and donut in a neighborhood decidedly not known for it’s Mexican fare? But let me back
up a little. Early this year, Granata and I, fed up with the pomp of Bushwick, decided to
seek out a bar with less pretense. Through some expert sleuthing, we located the
Starlite. Nestled in a quiet corner of Kensington underneath the F train on McDonald
Avenue, the facade might go unnoticed to the average passerby. But step inside and
you’ll find a world not much mentioned in the northern section of our borough. Local
miscreants huddle around the lone pool table in the center of this small bar. Everyone
drinks Bud, everyone knows everyone, and in a pleasant if baffling twist of fate,
everyone seems to welcome me and my starry eyed shithead friends into their
neighborhood space. And thank god, because this is my type of bar. Recently, on the
night of my 26th birthday, I wound up at the Starlite after a few rounds of Bowling over
at Melody Lanes in Sunset Park. I was hammered, and found myself speaking fakespanish
with a couple of equally wasted Mexican dudes who somehow figured out it
was my birthday. Suffice to say, no complaints there.
Although we didn’t make it there on my birthday, the Donut Shoppe is the
quintessential nightcap for any night of hard work up at the Starlite. Shuffle yourself
down to Avenue U and step inside this 24 hour BYOB diner and pastry shop for
something truly rare. I will personally say that I have never come across a cheaper meal
outside a deli in New York City. I recently shared a meal down at the Donut Shoppe with
Boston heavyweight Erica Sutherland of Littlefoot (you know, Littlefoot?) Between the
two of us, we ordered a fish sandwich, two chicken tacos, two donuts and two drinks,
which came out to a grand total of $12. If you can find a better deal in north Brooklyn (or
anywhere in the northeast) well, it’s on me.

The Bus Stop sat squarely at the end of Lower Allston. I mean way down there,
real low. The bottom. And in a tragic yet all too familiar story, the reptilian overlords of
technodystopia vanquished it from the muddy banks of the Charles this year, probably
to make room for a new CBD coffee massage parlor or some shit like that. The regulars
at the Bus Stop were a fine bunch of Boston shitheads, real upstanding citizens.
Friendly clientele are hard to come by in the marginal nether-zones of old school
Boston, but the Bus Stop’s huddled masses never failed to greet you with a smile. This
is why, in the three odd years since I left Boston, I always would make a point to grab a
pitcher at the Bus Stop whenever I was back in town. Usually accompanied by my friend
James Coarse, himself a real upstanding citizen.
With a few pool tables, a bathroom perfect for the consumption of yeti powder,
and a backyard parking lot great for making out or smoking cigarettes, the Bus Stop
offered what so many newer establishments in Boston and beyond neglect: character.
Heart, warmth, chutzpah. Call it what you will, but if you’re a head you know what I
mean. And although that certain je ne sais quoi seems to be vanishing from our
landscape, stolen by the heartless like they’ve stolen the land, water and air itself, it’s
worth it to keep chasing that feeling. To find it in the margins, and to cultivate it
ourselves. It’s not easy, but it’s worth the hassle.

Listen to the music stylings of Dann’s current musical project, Bashful Slasher HERE and check out his latest below… – DS