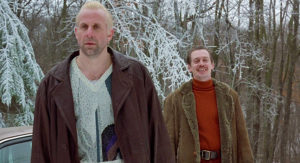 Set against a mundane midwest backdrop featuring gusts of wind and a blinding winter snowstorm, an ethereal yet foreboding score leads us into Fargo, Joel and Ethan Coen’s infamous black-comedy crime film that was nominated for seven Academy Awards and won two (for Best Actress and Best Original Screenplay).

Fargo ensnares you the moment that jumpy Oldsmobile salesman Jerry Lundegaard (played with brilliance and sliminess by William H. Macy) stumbles into a sleepy bar in the middle of Fargo, North Dakota. He’s there to meet the loudmouthed Carl Showalter (Steve Buscemi) and the brooding Gaear Grimsrud (Peter Stormare), who sit in the back of the bar in the corner, scowling in turtlenecks and big parkas. Jerry—words thick with a comedically exaggerated Minnesotan accent—is there to inquire about kidnapping his wife, folksy and well-meaning stay-at-home-mom Jean (Kristin Rudrüd). Naive and selfish (and desperate for cash for unknown reasons), Jerry asks the mismatched small-time criminals to kidnap his wife, so he can benefit off the ransom that his father-in-law will no doubt give. He stupidly makes them promise: don’t hurt Jean—this’ll be really simple. Yeah, okay.

Things go haywire when complications arise (as they always do with murder). The day of the kidnapping comes, and it appears that Jerry doesn’t need the money after all. He tries to reach Carl but gets no response. He and Gaear are too busy breaking into the Lundegaard home, nestled away in a quiet, snowy neighborhood in the suburbs of Minneapolis. They chase Jean down in a disturbing yet hilarious sequence; only the Coens could pull of such a scene. Transporting Jean to hide away at Moose Lake until the ransom exchange is over, they are pulled over by a trooper, who notices Jean in the backseat and is systematically executed by Gaear; the witnesses, two young kids who drive by the nighttime shooting, are murdered as well.

Now, Carl wants the ransom money all to himself. Pregnant, ambitious, and soft-spoken Chief Marge Gunderson (played by the ever-talented Frances McDormand, who won the Academy Award for her role) is alerted with the trooper’s death, and she won’t give up when she begins detective work that leads her to knocking on the door of Jerry’s dealership.

Things are not as simple as he originally thought—and to Jerry’s horror, there’s no getting out of it.

Fargo is a brilliant film, packed with disturbing scenes sprinkled with comedy, a storyline brimming with fascinating characters (that will leave you wanting to know so much more about them and how they’ve come to the situation they’re in). Fargo‘s a dark film, but is incredibly rich in heart and storytelling; it’s a film that grips you from the moment it opens with Carter Burwell’s scoring and the fictional prelude implying that it’s based on true events. It’s ludicrous, it’s brilliant, and it hurls you back into the 1990s. Fargo isn’t a film to miss—whether it be on a tiny TV or a big screen, go see it.