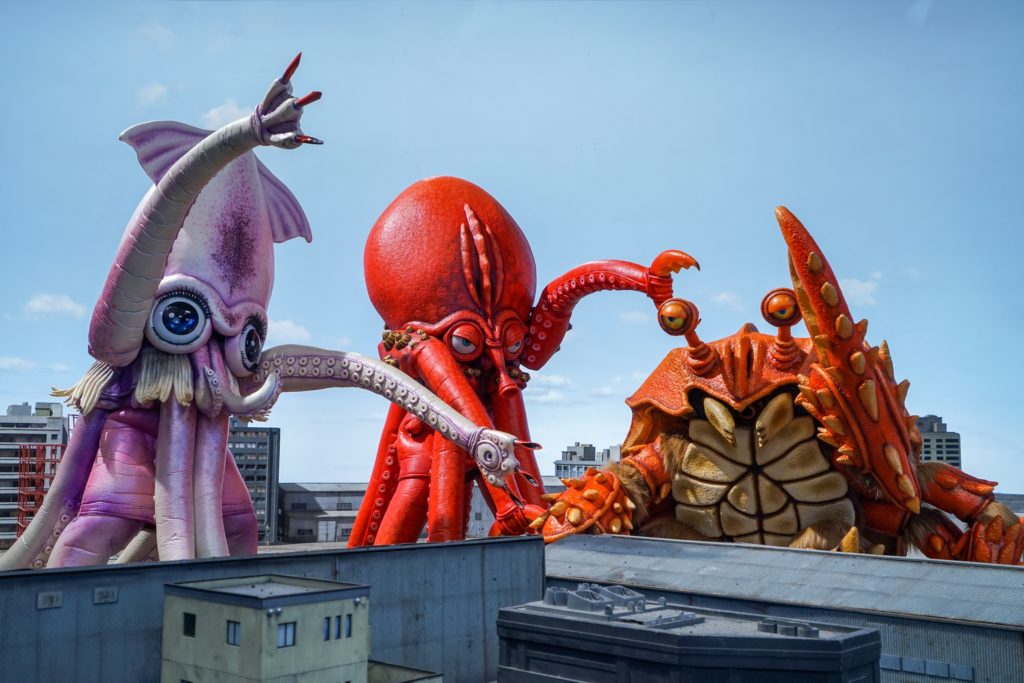 Covering a film festival– even within the confines of one’s own home– can be intense. Beyond the daily grind of watching a brand new movie, pouring out 1000, and repeating, the subject matter itself can be grueling, particularly when dealing with the cutting edge of independent cinema. This week alone, I’ve watched multiple stranger-than-fiction true stories, a comedy that got surprisingly real itself, and the all-out assault on good taste that is a new Troma film (watch this space in the coming days for a profile of ringleader Lloyd Kaufman!). Don’t get me wrong: I’m having a blast, and several of the films I’ve watched this week have a good shot at winding up on my year-end list. But sometimes you just need to chill out, take a load off, and watch a silly little movie in which actors dressed as giant sea creatures destroy downtown Tokyo and start a new sensation in seafood.

An homage to the classic “suitmation” genre of of Japanese giant monster (or kaiju) films, Monster SeaFood Wars begins with Yuta, an aspiring chemist and son of a master sushi chef, delivering a basket full of fresh seafood– a squid, an octopus, and a crab– as an offering to the local shrine. Before he can enter, however, he is pushed off his bike by an unknown assailant, and his offerings fall out of his basket. No sooner has he picked himself up, however, than the city is beset by– you guessed it– a giant squid, a giant octopus, and a giant crab. Admitting that his own experimental growth serum may be at least partially to blame, Yuta enlists in the Seafood Monster Attack Team (or SMAT), where he quickly falls into a love triangle with a beautiful young scientist (who also happens to be his childhood crush) and a hotshot pilot. The SMAT forces attempt to subdue the creatures with enormous cannons filled with rice vinegar, but to no avail. They do manage to knock off a tentacle or two, however, only to make a remarkable discovery: the beasts produce some of the most delicious, succulent meat ever tasted by human tongues. Soon, the forces are in a race against time to both destroy the monsters, and produce enough kaiju delicacies to satisfy Japan’s legions of foodies and influencers.

I’ve never seen any of director Minoru Kawasaki’s other films, but he’s certainly found his niche: his filmography includes such titles as The Calamari Wrestler, Crab Goalkeeper, and Executive Koala (that last one in particular has rocketed straight to the top of my must-watch list). What’s clear is that Kawasaki understands the basic, childlike thrill of guys in monster suits hitting each other. And what suits they are: while Monster SeaFood Wars is obviously a low-budget affair, the creature costumes are genuinely impressive, crafted with care in homage to the iconic beasts of the Godzilla and Gamera films of yore. According to the press notes, Kawasaki drew his inspiration for a giant octopus being fought with rice vinegar from an unused idea from Godzilla creator Eiji Tsuburaya. I have no idea whether that’s actually true, and can’t find any evidence to back it up, but even if not it speaks to Kawasaki’s credentials that he would make up a story about Eiji Tsuburaya. 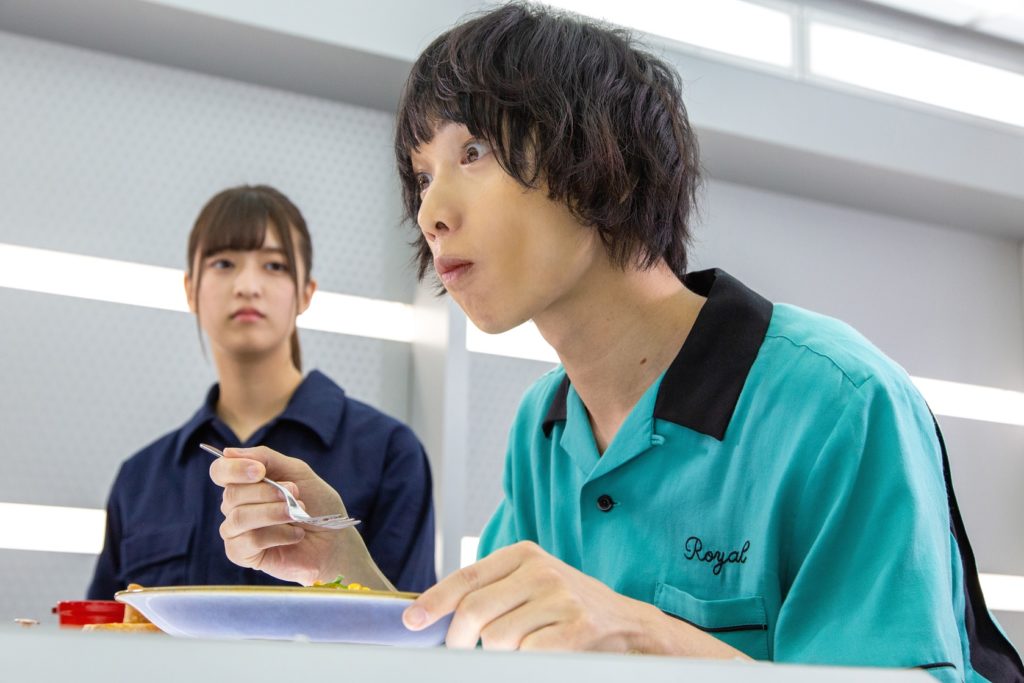 As for the movie itself, well, it’s pretty damn silly, but what did you expect from a film entitled Monster SeaFood Wars? Like the movies that inspired it, the biggest issue is the amount of non-monster time spent with generals, scientists, and regular-sized humans sitting around in war rooms discussing how they are to defeat their adversaries. Yet even in these scenes, there is a likable sort of earnestness that keeps you from getting too annoyed. The story is framed by talking-head interviews with the characters recalling the incidents of the film (“Some days you can still smell the vinegar!”), and the young cast bring a wide-eyed charm to their personal drama. Of the ground-level business, my favorite sequence by far is a mid-film tangent in which monster meat takes Japan by storm, and we are treated to a long string of mini-skits involving newscasts, faux Youtube videos, and other scenes in which characters testify to the flaky deliciousness of the oversized tentacles. My sense is that this sequence is filled with celebrity cameos which flew over my head, but no matter: for maybe ten minutes, the film becomes Tampopo with tentacles.

Honestly, I’ve probably written more than enough already. This is a movie called Monster SeaFood Wars, about giant seafood monsters who fight each other. If that sounds like a good time to you, see it. If it doesn’t, see a doctor. Is it a modern classic? Probably not. But does it feature a third-act reveal of a giant, thematically appropriate robo-suit? No spoilers, but let’s just say you’ll be more than satisfied.