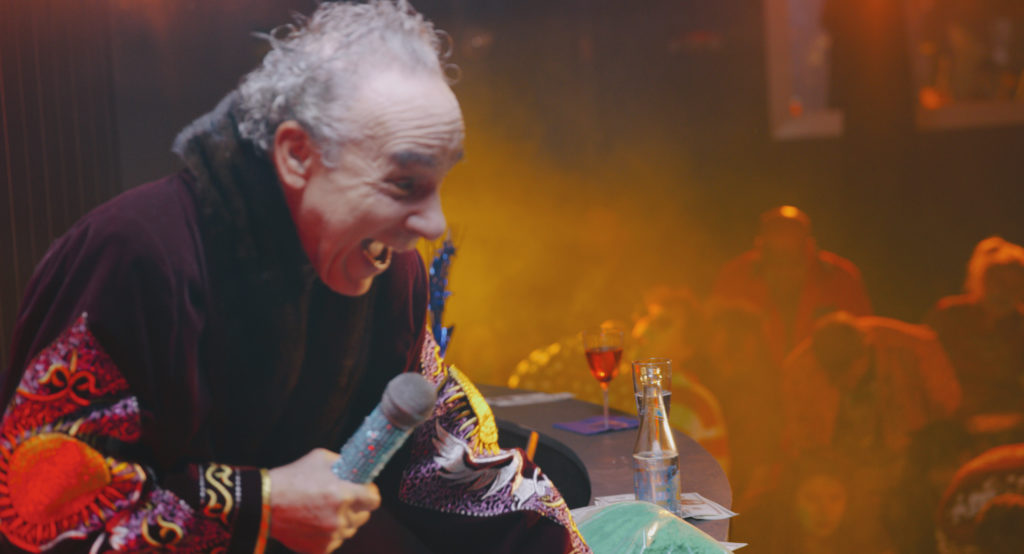 For nearly half a century, Lloyd Kaufman has been one of moviedom’s most entertaining cranks. As a filmmaker, he’s created such legendary bad taste cult classics as The Toxic Avenger, Class of Nuke ‘Em High, and Sgt. Kabukiman: NYPD. What’s more, he’s the co-founder (along with Michael Herz) and public face of Troma Entertainment, the proudly ragged New York movie studio that’s been a nutritional staple for generations of midnight moviegoers and video store rats (your author included). Troma, of course, is famous for its low budgets and good-natured sleaze, and Kaufman has long played into this image with his hyperactive, anti-establishment public persona.

But you don’t last 47 years in show business by being sloppy, and behind Kaufman’s motormouthed pitchman lies a shrewd, canny moviemaker. At the online Fantasia Festival, which saw the world premiere of Kaufman’s latest feature #ShakespearesShitstorm (a Troma-tized adaptation of The Tempest which– viewer beware– stands among the studio’s most willfully offensive works), I had the opportunity to ask Kaufman how his approach has developed over the years. “We want to make movies that become classics,” he reflected. “It was always the auteur approach, which I had read about, since I am very bourgeois and speak French, at Yale University. The film society had a big stack of magazines from the Cinémathèque Francais, the Cahiers du Cinema.” (He then spoke a few sentences in fluent French, apparently under the impression that I was a member of the local Montreal press; it was a charming enough gesture that I didn’t have the heart to correct him). “We’re not in it for money. And that’s still the same approach.”

Nevertheless, he acknowledges that independent filmmaking has changed, both for the better and for the worse. “Regarding the making of the films, that has become a much more pleasant thing, because the equipment is smaller,” he muses. “You don’t need as much lighting. It’s almost fun to make a movie that’s digital!” Likewise, the proliferation of digital technology has cut down considerably on the historically staggering costs of making a feature film. He describes #ShakespearesShitstorm as “a $50 million movie made for less than half a million US American dollars,” which, he notes, is more or less the same as the budget for The Toxic Avenger— in 1984 money. “You could be a nurse, do something with your life that’s useful. A teacher– we could use some teachers these days! You can make your own movie for $5000, and have a real job, and do something good for humanity. After maybe a few years, you’ll have enough movies that bring you revenue, so you can be a full-time movie maker.”

That being said, while the means of production have become more accessible to up-and-coming filmmakers, the distribution landscape has become more daunting. “The media conglomerates, which are now owned by phone companies– or electrical parts makers, like Sony– they aren’t movie companies. They’re not art. It’s nowhere near art. It’s a business, and it’s a business of committees.” The problem, in Kaufman’s estimation, is that, with so much of the industry consolidated around big-budget movies made by giant corporations, it’s getting harder for an upstart to gain a foothold. “I don’t know if it’s possible to start a real independent studio that performs all the functions that Troma does now. I think it would be really hard to do it today.”

The secret, then, may lie in building a community, which has been a large part of what’s kept Troma afloat. Troma has built up a devoted enough fan base that young fans will travel from across the world to help out on their productions. “We had people from Iceland, from England, from France, Japan, Canada… all coming to take part,” he recalls. “It was a really joyful, loving group.” Multiple Troma alums have gone onto legit Hollywood stardom, and have paid their success forward (Guardians of the Galaxy director James Gunn got his start writing the script for Tromeo and Juliet; fans will notice Kaufman popping up in those films in Stan Lee-esque cameos). And while Troma’s films are, by their nature, divisive– Youtube recently pulled their channel for violating “community standards”– Kaufman points out that they’ve been accepted to a by a surprisingly broad spectrum of audiences. “What community has not honored Troma and me? From Moscow to Shanghai, to the American Film Institute, to the British Film Institute. Cinémathèque Francais, festivals in Spain, Italy, Portugal.”

“The only one I haven’t gotten an award from is Antarctica,” Kaufman concedes. “I guess penguins there– you know, they marry for life, and maybe they’re a little prudish. I dunno. Penguins don’t seem to be too excited.”