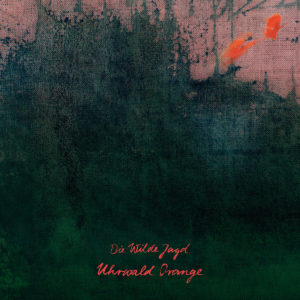 Die Wilde Jagd is an incisive krautrock group fronted by Sebastian Lee Philipp, a Berlin-based musician with an affinity for ritualistic suspense. This April they released Uhrwald Orange with Tapete Records, their first full length album since their debut LP in 2015. With half the tracks exceeding 10 minutes, the release is an indefatigable wave of psychedelic post-rock. And my goodness, its sound is mythic.

Each cut is imbued with a heavy dose of anticipatory excitement. “Flederboy,” the opening track, is a 15-minute escapade of a bass line that never resolves and a backdrop of nocturnal static. We’re left with the vague snorts of a farm animal and I can’t help but think of that playful organ intermingling with faint bahs on Pink Floyd’s “Sheep.”

If you’re yearning for some catharsis, “2000 Elefanten” slides into view with Kraftwerk-esque intensity. A compressed and tubular bass line marches with an elemental satisfaction. Brusque vocals kick into gear atop a sea of metallic percussion. Gellend in die Nacht hinein / schlägt ein Herz aus Elfenbein. / Es verrät dem Heer aus Sand, / was der Mann im Mohnfeld fand. (“Shrill into the night / beats an ivory heart. / It reveals to the army of sand / what the man in the poppy field knew.”) Lasting only seven minutes, it’s certainly digestible, and a definitive highlight.

Further along and the group’s sound meanders, toying with blends of electronic and acoustic instrumentation. “Kreuzgang” especially comes to mind, with the second half of the song coming down from a climactic flourish of drums, cymbals, and shakers before drifting into monastic crooning. “Säuregäule” feels like a Can track that never left the studio, but the atmospheric layering still gets me. And to close out, “Der Uhrwald” goes full-on Brian Eno with sparkly synths and arpeggiating warbles that sound like they’re swimming through sewage.