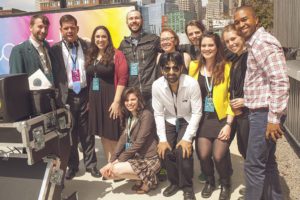 Mayor Marty Walsh at Together Fest 2014. Photo by Nick Minieri

Most of the time, it would be tough to mistake Boston for Barcelona, but Together Fest this week could have you wondering whether you’re in Catalonia or the Commonwealth. Boston’s homegrown music, art, and technology festival promises the opportunity to go out dancing to amazing electronic music every single night this week.

“We book so many shows throughout the week,” says Corina Hernandez, Together Fest’s general manager since 2011. “We’ve always focused on booking the cool, underground, smaller talent that is about to blow up. We don’t only want to bring the big acts that everyone knows and likes. We want to bring the artists that have been doing it for a really long time, and the smaller guys who are doing the more forward-thinking things.”

Corina says, “Boston is ripe for electronic music. This city, it’s a very young, very international city, there are a lot of technology companies, there are a lot of creative people. Together is an opportunity to find all these people who are doing creative things in different areas, and connect them.” Building a community is more complicated than putting on a bunch of shows, and community building is where Together Fest really shines. There are free workshops for people who want to learn to make electronic music and visual art, networking spaces to connect artists to each other, and talks where fans can connect with artists. “It brings together all these different aspects,” Corina says. “We want to give people who are creating art an opportunity to showcase what they’re doing.” The workshops are part of the free daytime programming. “If you have a little bit of free time during the day or after work, I would definitely try to make it over to Mmmmaven to check out some of the workshops,” says Corina. Nighttime events are more traditional shows and dance parties at venues across Cambridge and Boston.

There are passes for sale, but it’s not the kind of festival where you have to buy a pass to get in. Corina says the pass is for people who are planning to go to a lot of events. “If you plan on going to a few events one night, or ten shows throughout the week, it’s slightly more economical if you buy a pass.”

It’s easy to imagine going to ten shows this week, because there is so much choose from. “Our schedule page has so many events, it can be a little overwhelming. We’ve booked different genres in one night, so we can give an option to everyone,” says Corina.  She recommends checking out the online schedule  to map out your week, but if it’s too much to take in, here are her suggestions.

An Interview w/ The Folks Behind The Boston Rock City Editathon

With the Closure of Great Scott, Boston has a Venue Crisis on It’s Hands