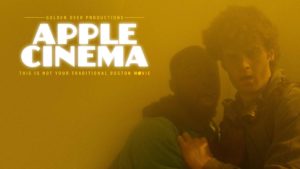 The Boston area continues to pour out talent from all sides of artistic landscape, and film is no different. Conor Holway, an actor/director/producer/writer from Cambridge/Lincoln just released a movie titled “Apple Cinema” on digital streaming through Golden Deer Productions-which Holway also founded.

The movie is unapologetically Boston, from its hyperlocal (and excellent) soundtrack, to the apocalyptic connotations of this specific time period in the city, to the microscopic view of the Prudential Center, and the many actors, writers, and crew people who made this possible. The owners of the real Apple Cinemas in Cambridge allowed Holway and company to shoot around 60 percent of the film, according to Holway’s Instagram.

Written by Holway, Danny “Seabass” Barton, Kevin Perrington-Turner, Jack Bigelow, and Yunfan Xu, “Apple Cinema” follows Holway and his friends in a three-year perpetual nightmare of watching the same films in the same cinema while in the midst of a claustrophobic, suffocating doomsday-esque haze thanks to a meteor star that hits the city. It gets tougher and tougher for Holway’s character to follow his dreams as a writer and actor as he must wrestle with past demons, present conflict, and a broader apocalypse that continues to affect everyone in the city.

“I love all the classic Boston movies, but I wanted to make a movie in Boston that didn’t have the Irish Mob or a bank robbery in it,” said Holway. “I hope it comes across that way. We used Boston-based sets, crew, concepts, locations, and music. This film is very much for people who actually live here and I hope you enjoy it.”

The film-which stars Drewski Dunn, Holway, Perrington-Turner, Christine Altan, John Bixxingham Bigelow, and a bunch more from that area-has a keen sense of atmosphere, and Holway elevates the murky setting with a plethora of fitting local tracks, from SAINT LYOR’S impenetrable “This is Not An Image,” which foreshadows the harrowing undertones of the film in its opening credits, to a chopped and screwed version of $ean Wire’s “Ultra,” and a bunch more.

The film was just released digitally on Oct. 19, and has premiered in a few local theaters including, Randolph, Providence and Woburn. In a premier video for the movie, Holway said he raised $20,000 to make the movie, to go along with a myriad of checks he made over the last seven months.

Visually and sound-wise, it’s a well-crafted and self-assured film, and considering Halloween is fast approaching, people should give this a try and support independent cinema in the process. The link to the digital version is below, and the password to get in is “arnie.” The phenomenal hyperlocal playlist is also featured below too.