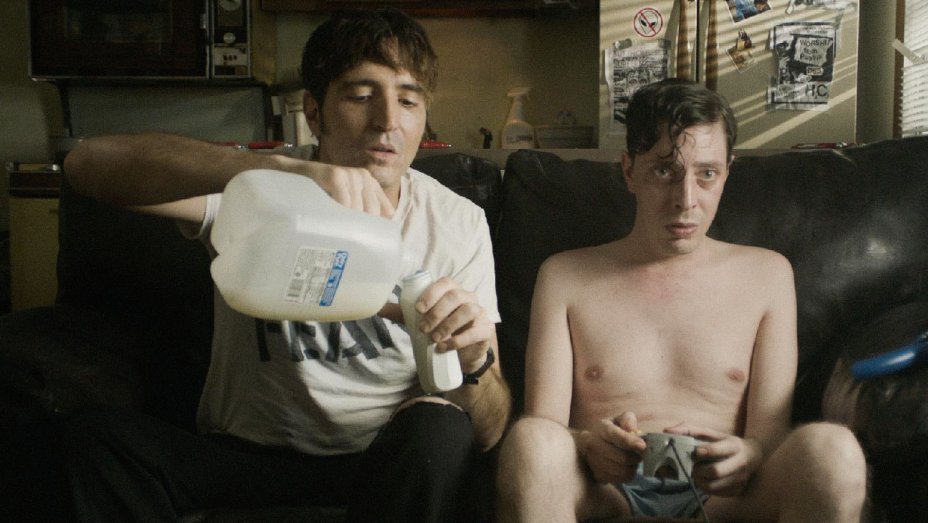 THE STREAMER: Kanopy (free if you have a library card or are a student in a participating academic institution!)

Recommending Relaxer during a federally encouraged isolation period may seem as reckless as this past Saturday’s Southie crowds (where Celtics green-wearing masses had been so inappropriately large that the next day, most of the bars had to individually announce closures for the day’s services prior to the official restaurant bans). While Joel Potrykus’s fourth feature doesn’t depict a chaos that tears at the seamed fabrics of society in the same temperament as Outbreak, Contagion, or Cloudy with a Chance of Meatballs, the impeding menaces are inward, in addition to being indoors. The entirety of the film takes place in a living room, and we are glued here with Abbie (Joshua Burge, previously in Potrykus’s 2014 Blizzard) on a leather couch that’ll feel disgusting after.

The year is 1999, and unbeknownst to me until watching this very film last week, the notion of the new millennium apparently wasn’t as groovy as Prince made it out to be. I was only seven when Y2K was a thing, and at the dawn of evolving AI and Grimes’s best cyperpunk banger to date, it’s kinda unfathomable to me that we thought that all computers would simply crash at the stroke of midnight. This fear doesn’t seem to concern Abbie, either; the scene opens as he attempts to perform a specific sequence of tricks in Tony Hawk’s Pro Skater to make the game glitch. At the same time, he is trying to drink eight baby bottle-sized portions of milk through a straw in the allotted time that his older brother Cam (Dash Dastmalchian) makes up, all in the name of a seeming string of challenges without a clearly explained prize. The next challenge, in which Cam synoptically dares Abbie to defeat Level 256 in Pac-Man, simultaneously contends for some of the most revolting scenes in recent memory (anyone with a fear of fluid expulsions, take heed) — all in the comfort of a small apartment.

Though Relaxer borrows a similar semi-surrealistic plot element from Luis Buñuel’s 1962 The Exterminating Angel, the inexplicable forces that keep Buñuel’s dinner guests anchored to a couch contrast with Relaxer‘s laid-out presumptions about a lonely gamer. I’d like to think that, on Potrykus + co.’s behalf, criticisms about Abbie are fair game; the appearance of a pasty, bug-eyed man in his underwear accompanied with a sniveling, infantile demeanor gives us a cleanly perforated assumption about Abbie. Really, it’s expected to not like him.

So what, then, makes this film even worth watching? As you navigate through the next couple of weeks in quarantine, it’s important to break out of a routine that can feel socially detrimental. Relaxer might be somewhat of a cautionary tale (though perhaps with the same effectiveness as those old anti-drug PSAs), and I can’t guarantee that there is a winner at the end of it. However, there is an electric current that runs underneath its domestic horrors of declining self-care, below any statements that could be said of toxic masculinity, and into the vasculature of a low-budget indie film with a memorable premise. Hell, I wasn’t really sure if I liked it at first, but credit is due when I now get a visceral reaction when I think about cherry soda.