For this year’s year ender, I’ve decided to celebrate the numerous shows I occasioned this past year, from the frozen tundras of Dorchester and Somerville, to the muddy waters of Chatham and beyond, each one of these experiences was unique and distinct from the last. I listed them by month in the attempts to provide both an accurate survey of the shows I go to, but also because it is generally easier to list items this way than ranking them via systems and unbiased researchers. It’s a whole mess and I don’t have the money or time for that, in fact I don’t even have the money for underground shows.

Most folks just let me in for free or they know I am one of the folks playing in or organizing the show. Or I can free tickets from record companies. So with that being said: DISCLAIMER I’ve thrown and or played in many of these shows, and also can acquire free tickets to any show I want to see. While this job has a surprisingly limited number of perks, free tickets is definitely one of them.

So here’s the list for this year. Remember to get out and stay out! (But if you want to stay in and make art, that’s fine too. Just don’t wonder why no one comes to your album release show after your multiple year hermitage to make the one greatest album of all time.)

While this footage may say it all, this was one of the first times I’ve seen the DAP theater at full capacity. And the energy was high to match. The supportering acts did not disappoint either, yet Anjimile obviously stole the show with the premier of their mixtape, Maker Mixtape. The lead up and delivery of this event was just the first showing of what is an amazing year for queer artists and artists of color in Boston in 2019.

Did I even go to this show? I’m like 75% sure even though I don’t remember the Freedom Brothers set or the Picnic Lunch set. But, I know I’ve seen Space Camp and Blue Ray play at DAP multiple times each, so this has to be one of them right? Anyways, shout out to Space Camp. I saw them play atleast three times this past year alone, and they are one, if not the, raddest bands playing in New England right now. You should definitely check them out! Blue Ray … they’re alright.

Shout out to Show Me The Body for a great show every time, and for Cult Fiction for laying down some heavy jams beforehand. Show Me The Body released Dog Whistle in March, which is one of my favorite albums of the year. Contrary to their Bandcamp page, I’m pretty sure Cult Fiction released a demo EP in early this year.

LUCY, play at my wedding. You’re really from Massachusetts if you know where Chatham is, and yes, we (the-hassle-at-small) travelled all the way out to the edge of Cape Cod to see not only LUCY (would have been worth the drive), but also Dump Betty, Uranium Club, and Urochromes (fucking Urchromes.)

Long story short, Dan almost got in a fight, I met my current partner, and the Cape DIY scene is pretty sick and alive, though like in the city, needs more places for art and music. In a place known for the arts (a la Hoffman) and progressive politics and diversity, like the rest of Boston, the Cape as a whole is in need for artistic community centers that do not focus on galleries providing naturalist paintings. The Cape needs engaging, empowering artistic community centers to provide mobility and expression to community living in a depressed economy.

Thanks KLYAM for throwing this three day, multi-venue festival every year. I played this show with Thighs, which now consists of Dan Shea on vocals and synth, No Glykon on lead guitar and drum machine, Maria Sedjo on drums, myself on Rhythm Guitar, and Lucas Barry on sax. Come see us play sometime. Can I promote us on here? Somehow, I do not think we will financially benefit from the promotion, so I’m not too worried about that.

Let’s all take a moment to meditate on how special the Bear Cages shows are every summer. The August rendition featured Period Bomb as the headliner and featured Bob Hatt, a Chris Strunk collaboration, and a Kevin Dacey appearance, among many more. These shows are an important aspect of Boston culture for their historic preference to their weird, the avant-garde, and the lawless. Consciously shirking mainstream culture, the curator keeps this show real and we at the Hassle thank them for that.

This show, while not only being a sick rave thrown by many electronic promoters in the city, also functioned as my brother’s bachelor party. This weekend was obviously memorable for many reasons, but this show was definitely the most populated I’ve seen DAP, while bearing witness to the city’s best DJ’s and electronic musicians all under one roof. It was a heady experience and certainly a party to remember, not just for the art, but that it brought together many diverse people operating in the electronic and electronic dance music scene in Boston today.

Oh great another Thighs show. Now now, you peg me for slightly more of an egoist than I actually am.

I am including this piece because Flesh Narc put on one of my favorite performances I’ve witnessed this year. Their music and spectacle is almost too much to explain; seeing Flesh Narc is an exhilarating experience, particularly at Ted House, given the basement atmosphere. I must say however that most of the denizens that occasion Ted House, were to my view, kids looking for a party. Two songs into each set, the crowd would ascend the stairs and return to their routinely scheduled spelunkings. No wonder artists and musicians are so critical of the herd.

November — Chained to the Bottom of the Ocean, Mountain Man, & Non- @ Obriens

Chained to the Bottom of the Ocean is a stellar death metal act. Their music, like their performance is a refreshing take on a genre that can, at times, be overwhelmingly mundane and unoriginal. Chained … turns the table on that notion and takes death metal back for the queers. Praise them for that! I have had their cover of Death Cab for Cutie’s song ‘I will Possess Your Heart’ stuck in my head for weeks. This night ended with a near ten minute rendition of that song, and to be honest, I did not want them to stop playing.

Non- is a band that is taking the queer Boston underground by storm. Though I was running late and missed their set, they are definitely on my list to see in 2020. 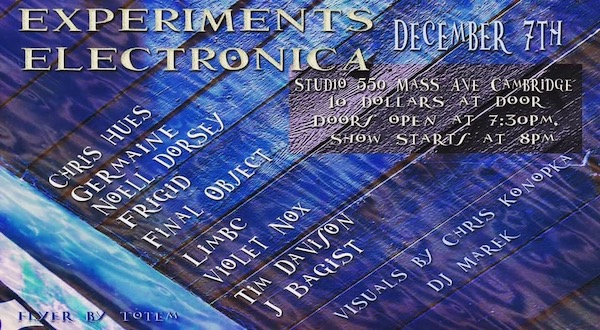 I opened this show with some poetry (thanks Dez!) which then led the way to a lengthy collection of Boston’s most unique and avant artists. Germaine’s set stole the show in my opinion. This was my first time seeing her solo set and she delivered. I feel the same way about Frigid, very lo-fi, very aware, very cool. This was also my first time in Studio 550, and I was pretty impressed with the layout and accessibility. Know that you have to take your shoes off before accessing the room, but this is a sick, affordable, alternative all ages venue that is looked over all too often.