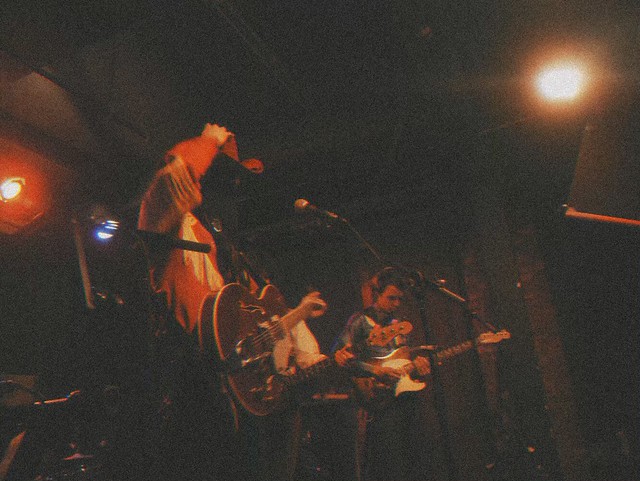 There is both a lot and not a lot to say about Orville Peck, the mysterious and gay country songwriter and musician. A lot in that a revival pastiche of the famous rhinestone cowboy is rather unique among indie labels, not a lot in that the songwriting and image presented is its own gesture entirely. In Peck’s case, but also speaking more broadly, the very foundations of good American Songwriting and how they appear today seem to be both of and against culture; yet this is only part of what makes Peck’s music so inspiring, sad, yet so allusive, even intangible.

The crowd at Great Scott that night was jubilant and also refreshed to be at the show. The audience was a mix of ages and interests and perceived sexual preference down the line with some decked in cowboy regalia. While there were a few too many ten gallon hats than usually seen in Boston, I remain open to it, having just gotten over my Hank Williams and Michael Hurley obsessions.

The tour surrounded the debut album of Peck’s, Pony and this show was the first of the tour and Peck’s first time playing in Massachusetts. The album is a country rock album tinged with vulnerability while also standing on its own, retaining poetic massiveness, humor and scope. Among the endless times I need to listen to an album to write about it, I was and still am seldom sonically or lyrically bored when I listen to this one.

I must state here however that I remain skeptical of the ‘big’ label as part of the package, which to me is the copper wire to the easy-bake oven of hipster solipsism.

Nevertheless, there I was, imbibing a sub-pop artist. Stranger things happen all the time. To me however, this album couldn’t have come at a better time. To be truthful, I’ve been continually contemplating queerness as a human quality and have found myself more disillusioned by the word than ever before, at the same time, I have become more accepting of it in a subconscious sense.

In a heterosexual society, for lack of a better term, every cultural emergence of queerness and gayness is commodified and held up as queer, while not seeming to take into account that these humans are in fact humans beyond their sexuality. Human qualities, when elucidated through art in a prismatic sense creates, in real time, reflections from many different perspectives. When I feel most encumbered in a city that makes me just crazy enough to ruminate on whether food is just a polemic or the actual thing, Peck’s music obliterates philosophical pretension and imbues on folks alike a more musical approach to life.

If the music of one’s own life is queerness, does this necessarily mean that all the artists are queer? I don’t think so.

‘Fell in Love with a rider, stayed awake all year … heartbreak is a warm sensation when the only feeling that you know is fear’ Peck Croons off the song ‘Big Sky’. The touring lifestyle and as well as movement from place to place are constants in the album with songs stating the name of Johnny Cash directly, while recalling countless other country legends in spirit. ‘…[B]eyond this town lies a life much sadder … another evening’s show, Queen of the Rodeo.’ Yet there is present emotional contradiction in the music ‘Lost my way on the other side, I know why, I don’t know when.’

Musicians are credited with causing swooning and in this case I mean causing SWOONING in strangers and sometimes they are so enigmatic they quite literally creep into the echelon of dreams.

From my vantage point at Great Scott that night at the left of the stage against a pole (it’s a good pole) – the sensation I got was of a silly boy crush specifically reserved for artists and musicians. Orville didn’t hinder this feeling by making eye contact with me while singing throughout his set, so consider another stranger having swooned.

Yet stranger things happen all the time, and what I mean is that, necessarily, are these circumstances all that strange? To me they feel like another chapter in a book, which is what you want when you go to an amazing musician’s shows. In this way music and shows act as emotional bookends that bring with them their own upheavals, revolutions, freakouts, passionate dissociation et..

Chris Hues //// is a poet, human & writer from Boston, Ma & music editor of bostonhassle.com. //// They can be reached at chrishughes@brain-arts.org or @crsjh_ via instagram & twitter.