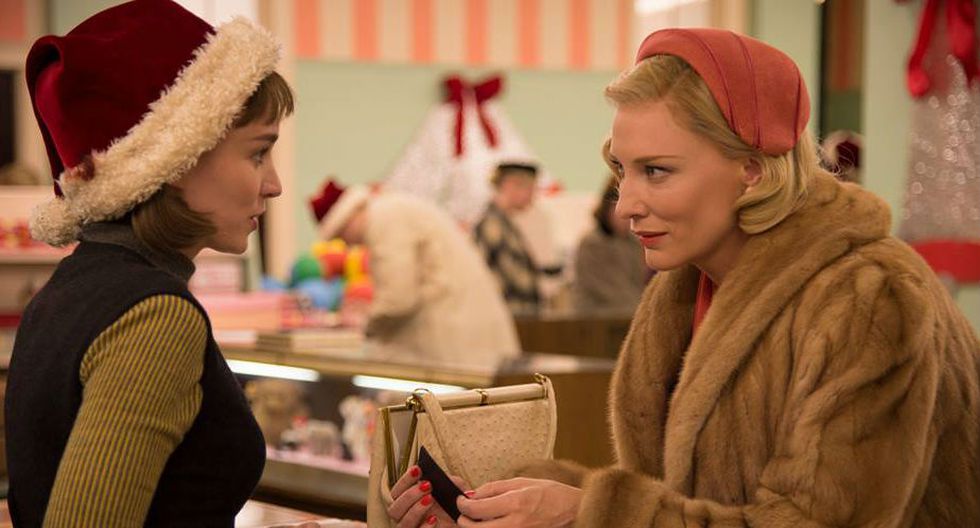 The holiday season is indubitably over, but the time to ignore your boyfriend to have a martini and creamed spinach with an older woman at a bar? That, my friend, is perennial. It’s not a surprise if you let yourself be swept away by Cate Blanchett’s husky-voiced allure and her grand countryside escapist gestures, but please don’t pack your morals along for the ride. As Carol is about two involved-ish women in 1950s NYC getting involved with each other, you might think, “Poor Rooney Mara’s boyfriend,” as he slumps away when his fourth suggestion of going to Paris is shot down. Sure, yes, it’s sad to be Richard (and also perhaps Blanchett’s husband if we allow our sympathies to extend to the antagonist’s boxing corner), but in this rare glimpse of a happy lesbian story, we cast aside the standards that run an untrying, heteronormative society.

By all accounts, Carol was most likely intended to be a movie to be taken seriously. Of course, it’s a pretty great movie that excels across genres — Oscar bait, holiday-adjacent, slow-burn romance, to name a few. And while we can enjoy all the accolades it’s received (see where this one falls on our decade-ender!), I think it’s important to consider its place in the gay agenda’s progress in cinema. Remember how, in 2005, there were two established heterosexual actors agreed to play male cowboy lovers and how they had to withstand the thinly veiled accusations of the actors’ sexuality, which somehow overshadowed the part about a Taiwanese director helming a piece about the American West (and winning an Oscar for it, which is what I live for)? Beyond being the Gay Cowboy film, Brokeback Mountain helped create newer mainstream spaces for other queer stories to populate. Now, you can find all sorts of movies that surpasses the ’00s tropes, such as HIV being a life-ending condition and adolescents coming out, and drawing in more dimensions to characters (again, check out our decade-ender to see that variety– good good!). Though the politics of the ’20s have started to circle around QUILTBAG-identified members to fill in the roles (the first openly gay superhero talk concerning Marvel’s Eternals certainly has felt as long as its title), it’s safe to say that future characters won’t be written solely on the debilitating nature of their sexual preference.

Here, I’d like to reintroduce Carol in the new category of a magical cute-awkward-meet (magical because it is beautifully shot and feels like what Serendipity meant to straight people, cute-awkward because of who the straight people were replaced with). 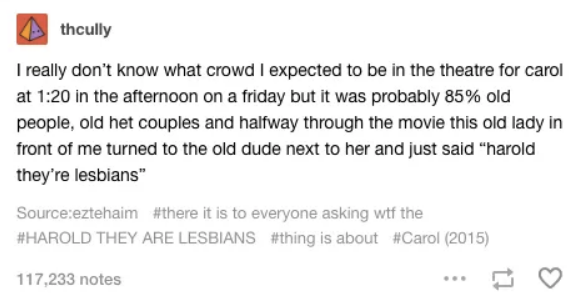 The first of what I hoped to be many memes about, from, and for Carol

Rooney Mara is Therese, the department countergirl who sells Cate Blanchett’s Carol a model train set during Christmastime. Therese is as mousey timid (“I mean, if the rate’s attractive“) as Carol is divinely brash (“I was hoping you might like to come live with me, but I guess you won’t”), and somehow, this popular dynamic in romance feels somewhat more comical and satiating than most (sorry to all the rom coms I’ve loved before). It’s somewhat of a phenomenon that I find this movie more quotable than I’ve intended to because 1) my one true film weakness is that I’m fucking terrible with remembering quotes and 2) see the aforementioned arrangement about the movie being a serious thing.

So take it as you will. Carol remains to be a well-carried story held up by strong performances and surprising cameos (though surprising because it’s Carrie Brownstein and it doesn’t take place in the PNW). Among the great things about the movie, the line deliverance is performed with impeccable drama and believability. The contrast between Therese and Carol is amplified by appearance and words, yet their connection is still as bright as all of the Christmas lights in the city. If “I can’t quit you” defined gay romance in the ’00s, then “flung out of space” would be the hanky code on our dating app profiles that signals our own Blanchett fantasies.

(There is also a possibility that putting quotes in bios is not a thing anymore and in that instance, I may have to scramble to find a personality.)