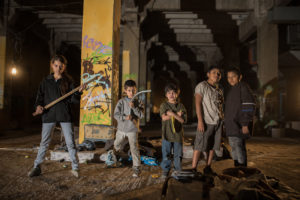 Somewhere along the border– not between Mexico and the United States, but between fierce self-determination and warm and fuzzy sentiment– you’ll find, if you’re very lucky, and if you care enough to look, Issa López’s Tigers Are Not Afraid. If that’s too elliptical, ok, there’s also this: it’s playing tonight at the Brattle as part of the Boston Underground Film Fest, so you can find it there. If I were you, I would.

Tigers is a curious, soulful, quasi-quest of a film, offering, on one level, a fairly gritty, realistic account of a group of homeless, parentless, Neverland-ish children scraping by in a northern Mexico bordertown, locked in mortal combat with a brutal drug gang when they’re not scrounging for food or yuks. But López chooses to frame and augment this story with fairy-tale material, aiming as much (or more) for allegory as for reportage.

The frame López deploys has two faces: we may as well call them death and transfiguration. After an opening sequence in which grim statistics fill and fade from the screen–about the scourge of addiction, the horrors of cartel violence, the harm done to families and children–we find ourselves in a classroom packed with pupils. Their teacher is asking and telling them about fairy tales when shots suddenly erupt in the hallway. As the shooters go on shooting their way through the school, the teacher instructs her students to lie on their stomachs on the floor. She hands one particularly stricken-looking girl, whose name is Estrella (Paola Lara), three pieces of chalk, each capable, she promises, of granting her a wish. Gunfire or no gunfire, this teacher is determined to continue her lessons.

Estrella, who has recently lost her mother to the cartel, uses her first wish to try to bring her back. When this turns out to have been a terrible mistake–there ain’t no such thing as a free wish, even for fearless tigers–Estrella flees her home and takes to the streets, soon landing in the artfully junk-strewn rooftop redoubt of her local branch of Lost Boys. (Come to think of it, the Peter Pan parallels run pretty deep and wide here, with Estrella as a particularly plucky and resourceful Wendy, and Shine (Juan Ramón López), the boy-gang’s alpha tiger, as a proud, angry version of Peter, too full of fantasies of vengeance against the huacas–the local drug cartel, who are obviously the pirates, and who took his mother, too–to move past his losses and live. And fairy dust? Estrella’s magic chalk sheds the stuff. I’m pretty sure that stuffed tiger is related to Tinker Bell, too.)

Anyway. As for the augmentation, it entails putting the real and the imaginary–or if you prefer, the supernatural–on equal footing. Graffiti spontaneously animates and springs off of walls; stuffed tigers waddle the earth, providing essential aid in urgent rescue efforts; the dead appear in plain sight and talk to the living (a mixed blessing); and several other neat or nasty reality-enhancing tricks are tripped. As Estrella and Shine close in on their quarry, the compounding enchantments efface the border between kitchen sink and witches’ cauldron ever further.

There’s a nicely knowing, recurring joke among the street kids. One of them keeps catching guff for using the word “virtuals” instead of “rituals” while referring darkly to Satanic rites allegedly performed by the huacas (which can mean something like demons, incidentally). It’s a good gag, because films like this one operate, after all, as virtual rituals of a kind, not Satanic exactly, but firmly in league with magic. If you’re thinking Guillermo del Toro, well, of course you are. He loves this movie.

Tigers Are Not Afraid, the English-language title given to López’ film, is a perfectly good and pertinent one, plucked right from a line of dialogue, and probably more market-friendly than the original Spanish title–Vuelven, which means “Become.” Still, the original title homes in on the moral of the story in a way that the English title doesn’t. Vuelven is not about finding refuge from societal chaos in the imagined innocence of childhood and childish things. It’s about leaving them behind, finding a way to “grow up” without becoming a monstrous adult, and creating the best stories to help us become our best selves. That it’s also a charming thrill-ride, and a thrilling charm-ride, is either a bonus or, possibly, the real point.

Screens Sunday 3/25, 6:15 @ Brattle Theatre
Part of the Boston Underground Film Festival – Click here for all of the Film Flam team’s ongoing coverage of the fest!