As a rule, period pieces set in the ‘90s make me feel old. When I watch, say, The People vs. O.J. Simpson, I feel a twinge, as I can both clearly remember when the world looked like that, and recognize that it absolutely no longer does. This is, of course, my problem; the farther removed we become from the Clinton era, the more it becomes fair game for nostalgia. And, of course, we are all getting old. So very, very old.

Curiously, however, I didn’t feel much of that twinge while watching Kill Your Friends, BBC vet Owen Harris’ new pitch black comedy set at the height (or maybe just past it) of the ‘90s Britpop explosion. This is likely because, as an American adolescent at the time, Britpop has always seemed about as real to me as the Star Wars universe. I know the major players, of course, from my years spent working at a used record store, and I know from reading UK music magazines that they were – are – a very big deal over there. But the dissonance between the hyperbole found in Mojo or Q and the sheer indifference towards these bands on this side of the pond has always mystified me. Either we’re as uncultured as they think we are, or England has been involved in a nationwide, 20-year folie a deux. Maybe both. 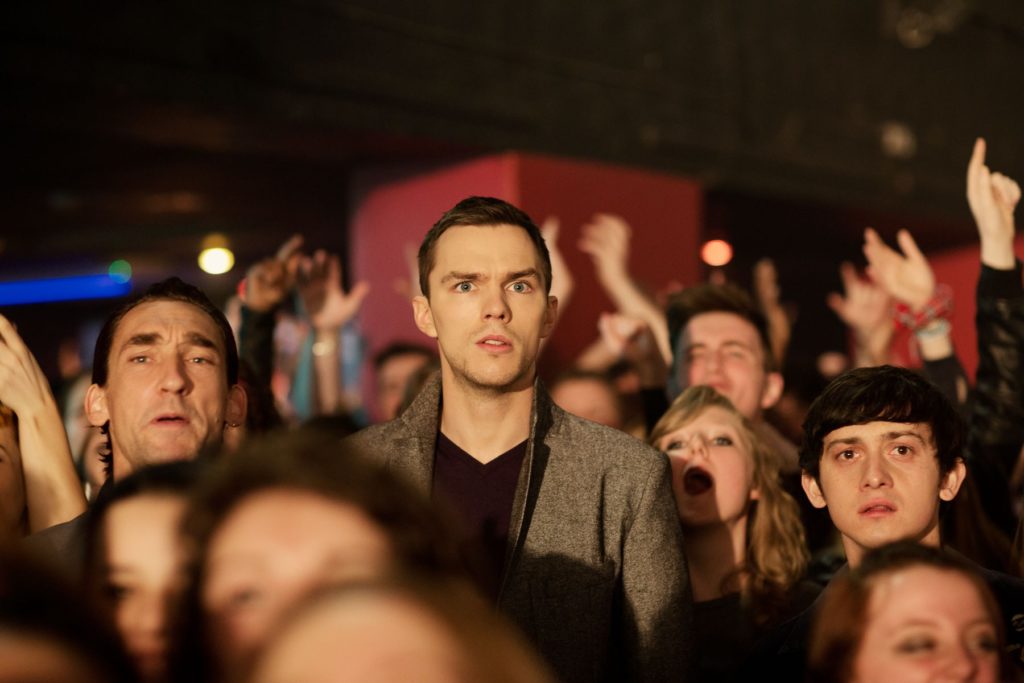 ANYWAY, Kill Your Friends tells the story of Steven Stelfox (Nicholas “Beast” Hoult), a ruthless A&R man at the fictional Unigram Records in the heady days of 1996. Stelfox, we learn quickly through his hyperverbal narration, is a bastard, one who places music, art, and basic human decency far behind his love of money. We first meet him berating an inebriated frenemy for owning an album by Menswear, then urinates on him as he chokes on a broken Seal CD. The story continues episodically from there, as Stelfox deals with troublesome “talent” (including a Tricky-like DJ, “gone Colonel Kurtz” in the production of his second album, and a hilariously talentless Spice Girls analog), sizes up (and thins out) his competition for the top seat in his department, and tries to sign the artist who will make him a legend. Eventually, he inevitably goes too far (that title isn’t a metaphor), only to bounce back by going even further.

As a film, Kill Your Friends belongs to Hoult from start to finish. Like Christian Bale’s Patrick Bateman (or, for that matter, Malcolm McDowell’s Alex DeLarge), Hoult plays Stelfox as a sociopath completely comfortable with his lack of humanity. John Niven’s script (adapted from his own novel) essentially provides Hoult with a 100-minute monologue so jaw-droppingly awful that it’s hard not to go along with. Occasionally, a chink appears in his armor; in a moment of vulnerability, he betrays his mantra of “I hate bands” by admitting that his first record was “Blue Monday” by New Order, and he becomes enraged when a colleague doesn’t know that Paul Weller writes his own songs, or that London Calling producer Guy Stevens has been dead for fifteen years (and would subsequently be unavailable to work with them). But these moments are fleeting, and the character soon returns to his sadistic-yet-quotable norm (“It’s not about the music… Do these look like the shoes of someone who gives a fuck about the Velvet Underground?”). 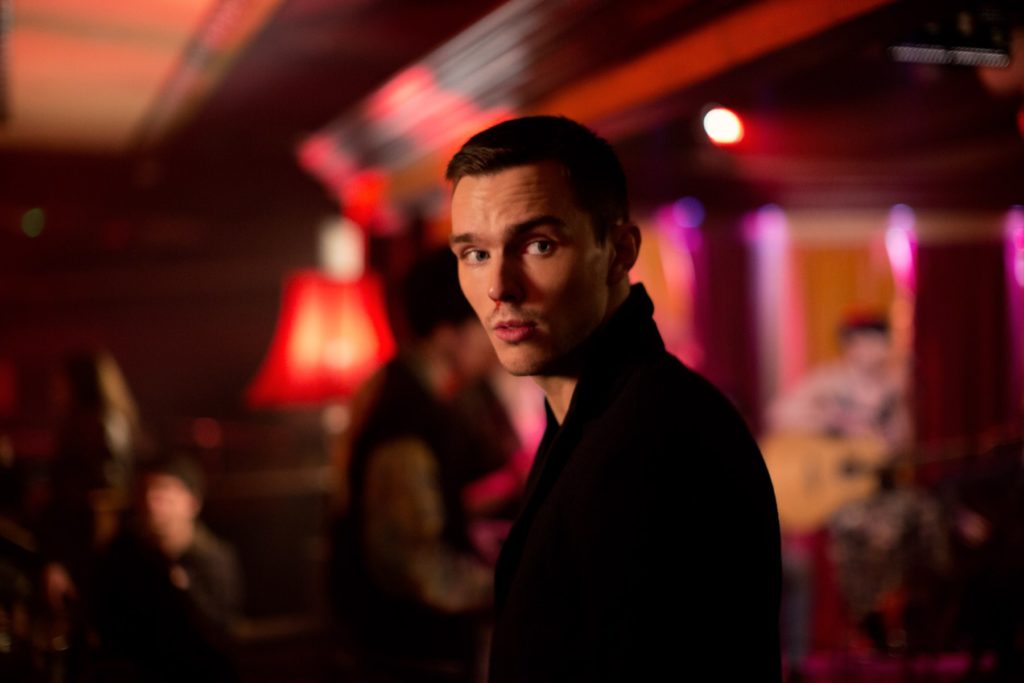 All that being said, the throwback feel of Kill Your Friends extends beyond its setting. The film’s snappy dialog, graphic violence, and caustic anti-hero would feel perfectly at home in the post-Tarantino indie boom of the ‘90s, alongside such films as Trainspotting and Lock, Stock and Two Smoking Barrels. As a result, there’s a sense of familiarity that occasionally undermines the film’s shock value. While the triumph of nihilism was shocking in the ‘90s, it now seems de rigeur for the genre. As Stelfox pulls out of situation after situation through increasingly deplorable behavior, and what feels giddily transgressive to begin with becomes simply numbing. One begins to wish he would get his comeuppance for a change of pace.

But then, on the other hand, he almost certainly does. Consider the time and place this film takes place: the Britpop bubble that made Stelfox a king would burst within the year, and, in a few years time, Napster would bring the entire industry to its knees. For all their smugness, we know that Stelfox and his cronies’ days are numbered. While Kill Your Friends plays like an I-Got-Away-With-It story in the vein of Goodfellas, historical context makes the ending seem more like that of Dawn of the Dead, its protagonists hovering in a helicopter over a doomed world. I would make a joke here about the Karma Police, but the film itself actually beat me to it. 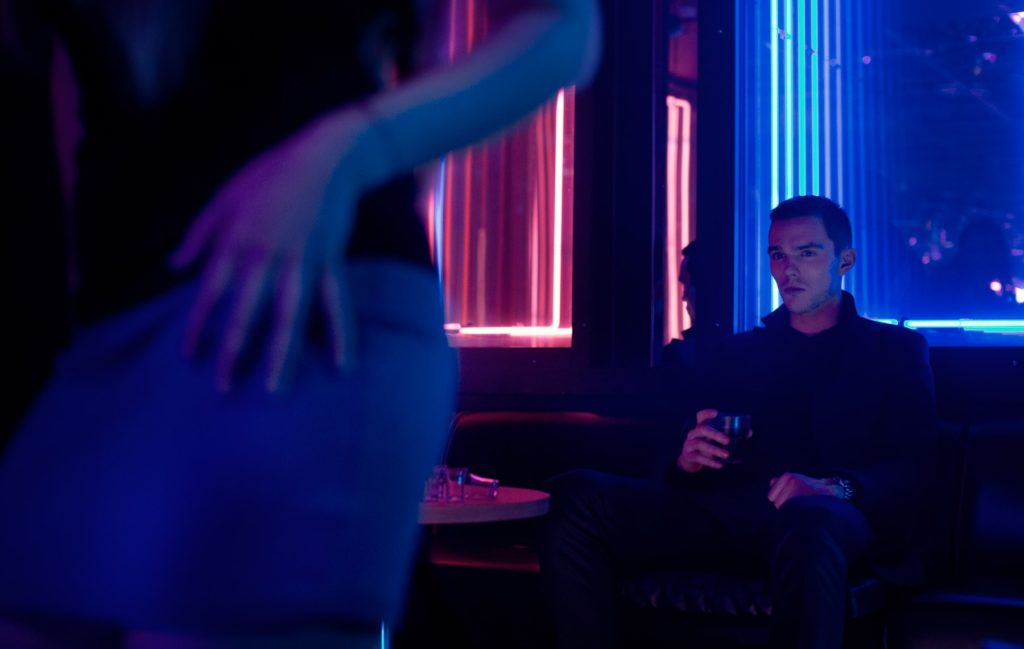 Still, while I’m not sure that the posturing of Kill Your Friends goes beyond the superficial, I also can’t say that I didn’t enjoy it. The dialog is razor sharp from start to finish, and many of the period touches are flat-out hilarious; of particular note is when a coked-to-the-gills German producer puts the hard sell on his new club single, “Why Don’t You Suck My Dick?” And while I can’t say how long it will stick with me, it did inspire me to stop by Newbie’s after work the next day and pick up The Best of Blur on CD. It may not have quite caught on over here, but the Britpop boom turned out some damn good records – no matter what Steven Stelfox might tell you.