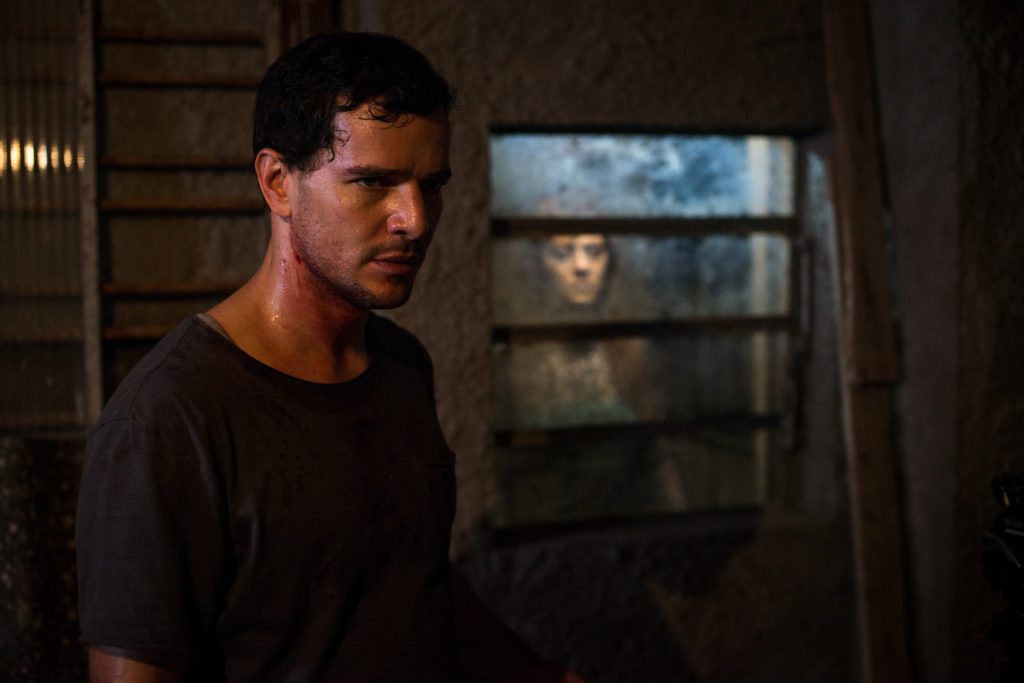 While introducing Saturday’s screening of The Nightshifter, the feature debut from Brazilian short film maestro Dennison Ramalho, a representative of BUFF explained (paraphrasing) “With the amount of different films we screen, sometimes people aren’t sure what to expect: ‘Should I be laughing? Should I be scared?’ So let me say right up front: The Nightshifter is a balls to the wall horror film.” I went into this film almost completely blind, and even following this introduction, I wasn’t quite sure what I was getting into: The Nightshifter takes its time, and toys with a few different tones, and even genres, before settling on its final form. But once all its pistons chug into full steam, rest assured: The Nightshifter is not fucking around.

The story concerns Stênio (Daniel de Oliveira), a down-on-his-luck morgue attendant in Rio de Janeiro whose icky job is matched only by his unhappy home life. Stênio does have one secret, however, that keeps his life interesting: he possesses the unexplained ability to converse with the corpses he’s tasked with sewing up. This is unnerving, to be sure, but it’s apparently been going on long enough that the novelty has worn off; he offers simple words of kindness to the confused cadavers, honoring some requests (as in the case of a John Doe soccer hooligan who asks he inform his wife) and denying others (the vengeful gangster demanding retribution). But when the body of a friend lets him in on a secret that hits a little too close to home, Stênio submits to temptation and uses his powers for ill gain. Unfortunately for Stênio and his children, it soon becomes apparent that the dead can do more than talk– and that they don’t appreciate being messed with.

If it seems like I’m being cagey with the specifics of the plot, it’s because I thoroughly enjoyed being led down The Nightshifter’s twisting path blind. In its opening scenes, the film seems to be going for the same sort of morbid whimsy as Michele Soavi’s magical realist zom-com Cemetery Man: like that film’s Francesco Delamorte, Stênio approaches his fantastical situation with the weary acceptance that one might reserve for tax forms, or the MBTA. This tone is largely jettisoned once Stênio takes matters into his own hands, morphing into more of a classic one-bad-decision film noir arc. Then, once that situation more or less runs its course, the film morphs yet again into a straight-up paranormal thriller. It is this mode that dominates most of the film’s second and third acts, and it’s undoubtedly what the host was referring to when he made his opening remarks. Simply put, The Nightshifter is fucking scary, aided both by its unpredictability and its willingness to indulge in graphic violence. There is one particularly shocking fake-out just as the shit starts to hit the fan, and it’s a testament to the film that I completely bought it as a place that the story might legitimately go.

Through it all, The Nightshifter captures the dread, mordant humor, and visceral horror of classic EC Comics (or at least HBO’s much-loved Tales from the Crypt). Crucially, it also captures EC’s larger-than-life morality, which usually found a semi-relatable lowlife making one indefensible decision too many and facing beyond-dire consequences. What Stênio does is unconscionable, and while you find yourself invested in his survival (and, more so, the survival of the innocent people in his life), you also can’t deny that he kind of has it coming. Credit must be given to the performances by Oliveira and, especially, Bianca Comparato as his kindly neighbor, whose expressive face and true-blue goodness give you someone to root for even when Stênio is just too much of a shitheel.

If there’s a flaw that occasionally took me out of the story, it might be the effects, particularly when it comes to the talking corpses. Rather than simply having the actors lay on the slab and talk, Ramalho opts to digitally impose their faces on stock-still bodies, which is effectively uncanny, but unfortunately marred by less-than-stellar CGI. Likewise, there will likely by some who will lose patience with the film’s meandering plot and unlikable protagonist, though, again, this unpredictability for me added to the unease of the proceedings. I’m okay with a few detours, especially when they lead to somewhere so horrifying.

And make no mistake, when The Nightshifter is on, it is on. It is in the setpieces, particularly toward the climax, when Ramalho removes the gloves and demonstrates the sensibility that made his name in the short film world (check out his Vimeo page for the rest of his filmography). I’m glad I opted to stick around the fest rather than walk home immediately afterward, because The Nightshifter will prime you to scan every dark corner for unimaginable horrors– both supernatural and all-too-human.