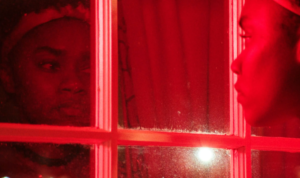 The Boston Underground Film Festival’s Dunwich Horrors program packed a punch this year with some seriously disturbing short films. From a whiteout blizzard to the sketchiest corner of a neon-soaked motel room, BUFF treated us to some chilling little flicks that made the hair on the nape of my neck stand on end. Given that these are short films, I’ll give you a little taste without giving too much away. Check these out, as none of these fantastic terror tales should be missed.

A demon girl is reborn on Earth. Shot in a gritty black and white, this nightmarish short is like the freaky lovechild of Eraserhead and The Twilight Zone. The short’s surreal imagery, mixed with the horrific, deep voice of a horned demon echoing through a desolate church in the woods, will send shivers crawling down the knobs of your spine. I felt like I was watching something I shouldn’t.

After experiencing a loss, a woman is given a music box that may hold nefarious intentions.

This trippy short is only three minutes long, but that’s all it needs to create the ominous mood. A low, foreboding voice echoes through the wilderness with slow, lingering shots featuring an increasingly unsettling score, á la The Ritual.

After a wedding, couple Nick and Erica stay at a cabin in the woods, but sudden death warps their plans to relax, and Erica is faced with her own mortality. A bizarre short with heart and electric chemistry between its leads, Mairzy Doats is a hellish dream rooted in reality.

Gwen and Jade stop at a seedy motel and are harassed by a man with roses. This neon-drenched short is unnerving and slightly ethereal, and honestly, one of my biggest fears.

Three witches drift through a hazy dream that may very well become a nightmare.

In the Mirrors, dir. Merlin Camozzi

Clara’s staying at an Airbnb but grows paranoid when she realizes she is being tormented by the unknown.

In the middle of a blinding snowstorm, an eccentric old woman begs for shelter, impeding on Henry and his family’s Christmas Eve. What does she want? She says she’s been looking for her son, Jonas, but has her eyes a little too intently on Henry. An utterly creepy short with a fantastic villain and a gritty aesthetic that will chill you to the bone.

Many years have gone by since David left home and his homophobic parents. When he returns for Christmas with his boyfriend, David finds that there is something nefarious at play with his family, and the seemingly good-natured invite home now doesn’t seem so “innocent.”

Glenna Piccolo’s mutant son has a taste for human flesh, so she hesitantly sets out to feed his insatiable hunger. This nasty, nostalgic little short feels like it was made in the 80s and I just struck the gold finding it in a dark corner of Blockbuster. Creepy, stylish, and gross.