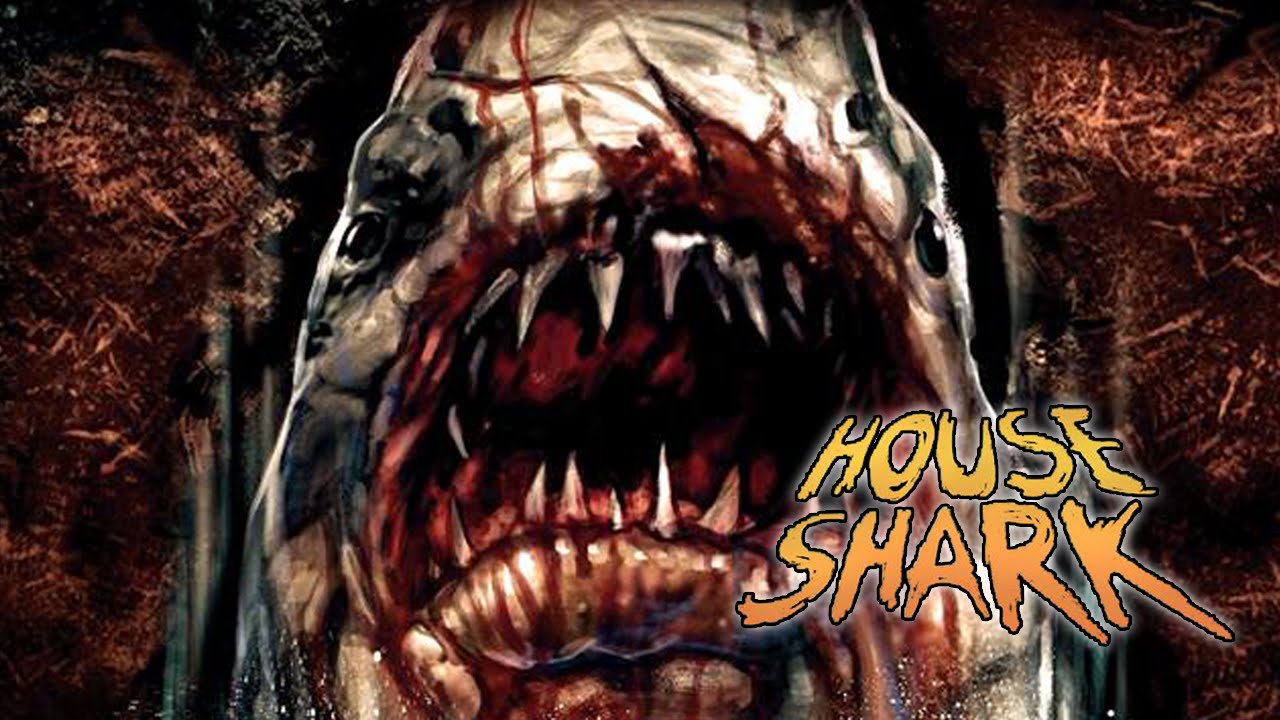 One of my fondest memories as a teenager was going outside in the summer with my shitty flip camera and filming short movies with friends. Sometimes in parks, sometimes in my backyard, sometimes in my own house– it didn’t matter where we filmed. We always found a way to make our creative minds come alive. It’s that heart and that kind of soul in film that I feel is missing in a lot of movies these days, and it’s that heart that Ron Bonk’s ultra-gory b-movie House Shark restores. Sure, there’s not any of the production quality you’d find in a big-budgeted film, but who cares when you have a movie as cool as this one? There is nothing to prepare you for House Shark.

Part Jaws remake and part Spielberg homage, all mixed with the low budget gore fest of a b-movie, not much different from the kind of movies a director like Adam Green would make. When mixed in a blender, you get a completely bonkers film like this. House Shark follows recent divorcee Frank (Trey Harrison) who lives with his younger son in a house which his son thinks is completely haunted. One night, Frank decides to dabble in online dating, and hires a babysitter to watch his kid as he goes on his first date in a long time. While he’s away and his son is asleep, the babysitter is attacked on, um, a toilet, by the house shark, which eats her and leaves a huge bloody mess in Franks bathroom. This event leads Frank to a nervous breakdown and Franks ex-wife to taking his son away from him. With nothing left to lose, Frank enlists the help of house shark expert Zachary (Michael Merchant) and down-on-his-luck alcoholic Abraham (Wes Reid) to help him take down the beast once and for all. 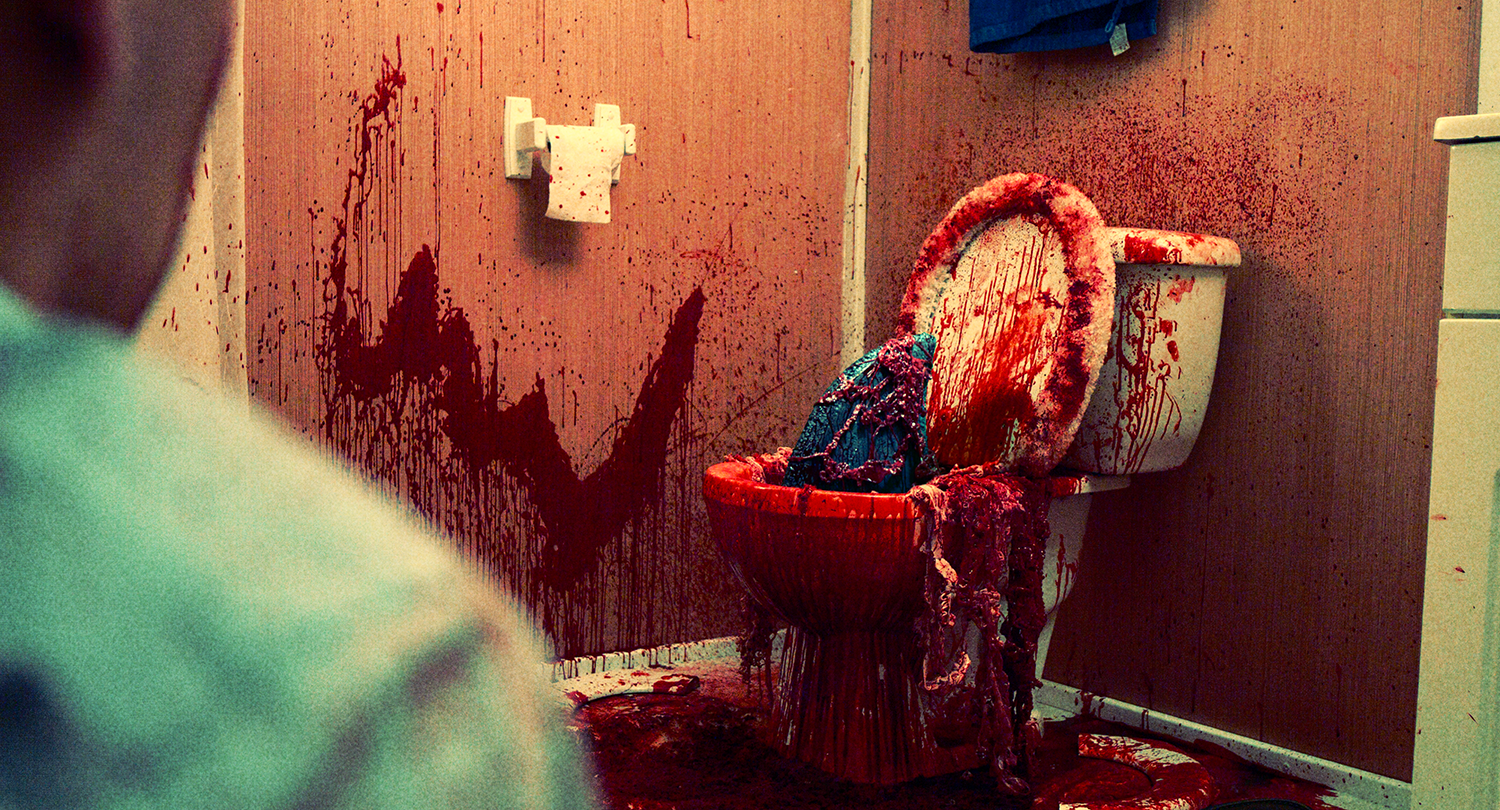 Chock full of homages to Jaws and other cinematic legends, House Shark is really a movie made by a film nerd, for film nerds. In this, Ron Bonk really isn’t worried about trying to make the greatest film of all time as much as he is trying to make a damn entertaining film, and in that he succeeds! I can’t remember the last time I’ve laughed as hard as I did watching House Shark. The outrageous and South Park-like behavior of Zachary and the unpredictable and drunk behavior of Abraham eventually rub our lead character the wrong way, and really create the most hysterical trio of characters in a long time. To tie this in with the Jaws connections, Frank, Zachary and Abraham are really the cracked-out versions of our lead characters in the classic Spielberg film. This is really where the brunt of the film works; the chemistry of our three leads. If it wasn’t for them, I have no idea how this monster movie would have worked.

And what a monster movie it is. Ron Bonk is not scared to show you the monster, and with throwing out the technique of not showing the monster at all, he creates the greatest shark creature design since Jaws. All the greatness in our titular monster is in the simplicity of the design. Nope, no lame CGI or terrible animation here! Instead, we get the good ole’ physical shark costume, which drives home the whole “old school, kids in a back yard” feel to this whole film. I had the pleasure of conducting an interview with director Ron Bonk, in which he states “I wrote the movie originally to play like an an old Super-8mm movie like, say, the short the kids made that plays at the end of Super 8. But then I went for a more cinematic look for it. Still, I wanted it to feel like a movie I may have made if I had gotten my hands on a film camera as a pre-teen in the ’70s.” It’s this mentality that really drives home my love for House Shark. This is a movie to drive your imagination wild, for the kids who make home movies and don’t share them with anyone but themselves. If you have ever made movies as a kid, like me, you’ll know exactly what I’m talking about.

In that spirit, I could not recommend House Shark enough. As I’m writing this article, thinking back about House Shark with a shit-eating grin on my face, I keep trying to think about the last time I’ve had this much fun watching a movie. It’s got heart, it’s got soul, it’s got a house shark. I mean, come on, could you ask for anything more? With that, I say bravo Ron Bonk, you deserve every amount of love this film gets. Give this man all your money!