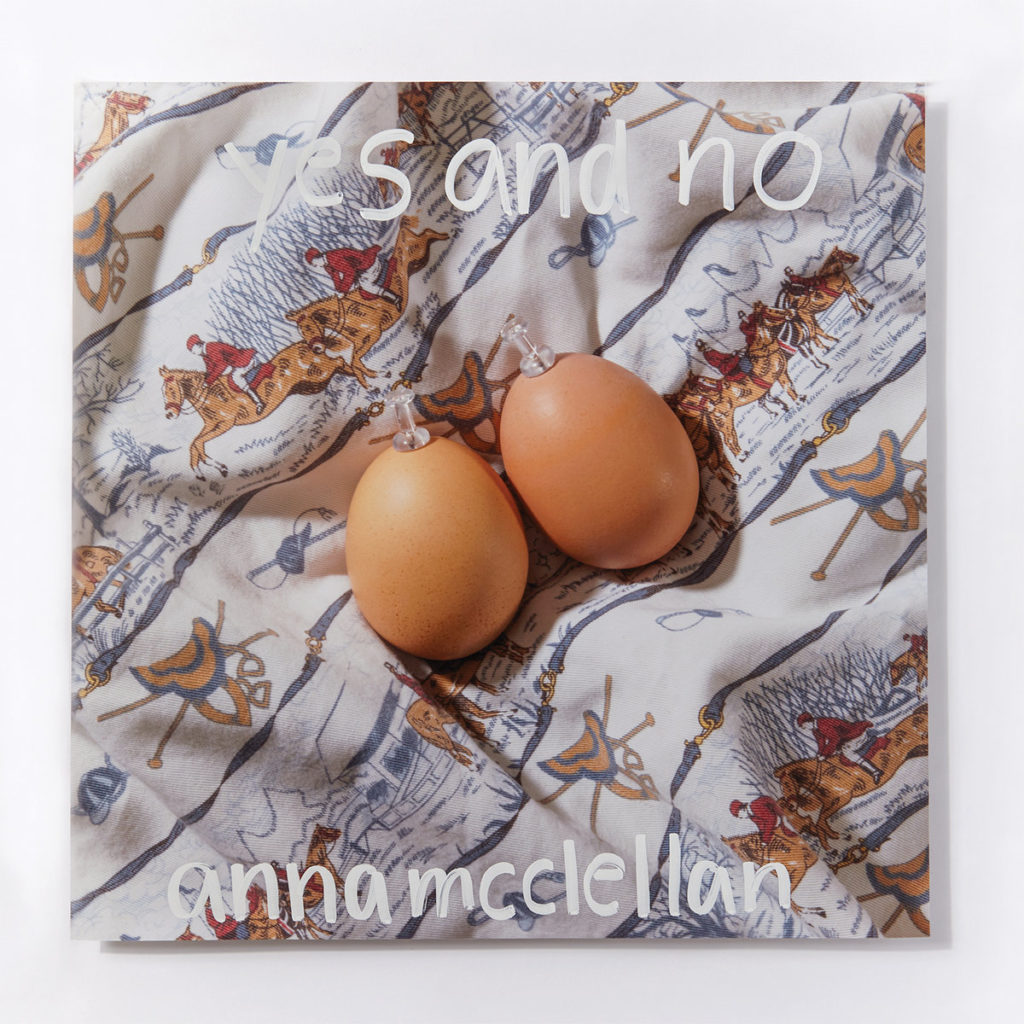 The piano ballad is a tricky thing, always teetering on the edge of camp and sentimentality. There’s a reason most indie rockers opt for guitars. Singer-songwriter Anna McClellan pulls off the piano, though, better than just about anyone. Her songs are intimate—smudged-ink journal entries and CBT mantras. There are confessions, bitten fingernails, and DSM-worthy quantities of self-reproach. McClellan recognizes the futility of her own laments. No, her new love isn’t going to make her “a happy type of person,” and yes, it was foolish to think otherwise. “I don’t know what I want,” she sighs. Amen.

Yet McClellan doesn’t take herself oh so seriously. “Why have words become so convoluted? / My brain is constantly polluted with bullshit and ass,” she complains on “It Just Makes Sense,” drawing out those final profanities. It’s hard to wallow when she swears like a child, belting her frustration over a whimsical piano.

While her peculiar, personal lyrics are more interesting than most of her peers’, it’s McClellan’s voice that makes her stand out in a crowded field. It’s perfect, I think, for its purpose. There’s a pop-punk influence, but her voice is much prettier than those nasally whiners. At times, she sings with an anxious warble, Tom Verlaine on Lexapro. It’s hard to put words to. She has show tunes power and artsy apathy all at once. Just listen, I promise.

McClellan recorded a new album last summer, and it’s set to release with Father/Daughter Records this November. She’s keeping details about the project under wraps for the moment, but I talked with her about pandemic life, mental health, and the self-reflection so integral to her songwriting. Our conversation is edited for length and clarity.

Boston Hassle: What’s your daily life been like through the pandemic?

Anna McClellan: I started gardening. I’ve been really into digging [laughs]. I’ve been meditating and doing yoga. I try to do yoga and meditate every day. And then I have therapy on Wednesdays. That’s been a really cool anchor, kind of like the only thing that I do consistently with someone else.

BH: How have you built structure into your day right now?

AM: It’s so hard. I haven’t. That’s one of the hardest things for me. Just in general. I start ruminating and spend all this time being like ‘I should,’ ‘I should do this,’ ‘I should do that,’ finding that hours will pass and I haven’t done anything. But I keep trying. For like a week I was waking up and doing yoga and meditating at the beginning of the day, and that’s a really good way to start. It gets me moving through the day in a way that flows. But I kind of got off of it.

BH: Have you been making music?

AM: I haven’t been writing very much or playing music really at all. Maybe like once a week or something. I just haven’t really been in like a writing headspace so much. I go back and forth between feeling like I should try harder and then like, letting myself just do whatever feels natural. So there’s moments of, ‘I should be writing’ or like, ‘I should be trying to make shit,’ but I figured that it’ll happen when it happens. And it’s not to say that I haven’t been doing anything. I’ve been recording some here and there.

BH: I’ve always really liked the way you confront serious emotions and scary experiences in your music while being able to laugh at yourself. Is that natural for you?

AM: I don’t think it was natural. It felt like, very scary initially, and still does, I guess. It’s hard for me to almost agree with you. Something that I’ve been working on a lot lately is not turning away from things when they feel hard and trying to stay present with all the shit that feels bad. I just end up watching TV when I want to escape.

I probably won’t ever feel like I’ve confronted them [difficult things], but the other part I’ve been working on is that lighter side of it, realizing that there is no arriving. I think that’s what makes it kind of funny. There’s like a futility to even trying that you have to just laugh at.

BH: What’s one of the hard things that you tend to want to run from but you’re trying to confront instead?

AM: Something my therapist and I have been talking about a lot is the ruminating mind. I have from a young age used my intellect as my way of processing the world. There are other ways of experiencing: emotionally, intuitively, and not holding on too tightly to thought as the be all end all.

BH: When you’re writing and when you’re making music, are you acting against the ruminating mind or are you able to channel it and all of a sudden it becomes a creative tool?

AM: I’m not sure. I often feel like I make things in spite of this overthinking, over-analyzing, self-deprecating dialogue that happens. But I also really like what I come up with, so it’s kind of hard to know. Usually, I do know when I like something. There are times when I’ll be sitting and writing something and it becomes stale from working too hard on it, like when you overwork dough and it ruins the bake.

BH: I think I think everyone can relate to the bread baking right now

AM: I’ve been trying to do the bread thing but I haven’t really been baking much.

BH: How was touring Yes And No?

AM: I got really burnt out touring that record. It was really damaging actually, in a way that I didn’t realize until after. You’re always moving. You don’t get to process things. Things just keep happening. I like time alone. I need time alone. You don’t get that on tour. And so, I didn’t tour for almost two years and decided to move back home. I realized I had a lot of mental and emotional health to deal with. Depression, anxiety. That was my main focus for the past two years, trying to find stability in myself. And touring really does not lend to that. So, I think I’m a lot more cautious about it now. I was very gung ho with Yes And No, wanting to do these five-week tours. I like being home more.

The tour we did recently, it was the first one back out in a couple of years. And it was amazing. Having the right people, it makes or breaks it.

BH: What were you consuming music and art-wise while you were making the album?

AM: I love bad teen dramas. Dawson’s Creek is kind of where I’m at right now. Reality TV. I really like TV a lot.

I got into this pretty big early-aughts indie phase last year, like Third Eye Blind and just like stuff that I didn’t catch when it was coming out. I went back and was like, ‘Damn.’ I think it invoked feelings of that time that maybe I never worked through. All American Rejects, shit like that.

I’m always really into Lucinda Williams. And recently I’ve been listening to a lot of Linda Ronstadt. She has this song “Willin’” that we’ve been playing on repeat. it’s about truckers.

It’s hard to remember what I was doing then. I also don’t listen to stuff all the time. I think a lot of inspiration too comes from my own relationships, obviously. I don’t know if that’s too obvious to say.

BH: What’s it like to have recorded your album almost a year ago? Have the songs taken on new meaning?

AM: They do they take on new meaning. I kind of like having this time with the album before other people hear it, because once other people hear it then the songs could mean anything to anyone. And I like this time to have them mean what they mean to me and to the people I made them with. But yeah, I still like them a lot [laughs]. Something that I keep finding is that I’ll write a song and then it’s meaning makes more sense to me after it’s finished. So, having the time to go back and find hidden truth is satisfying