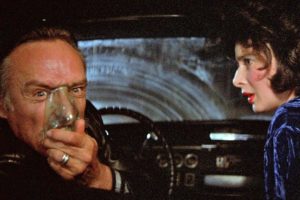 David Lynch has always been an incredible director. From his early films, to Twin Peaks, to his most recent films, he’s a rare director that can capture creepy, unnerving, magical, beautiful, and surreal in a single shot, let alone in a character or a story. His films ensnare you from the opening shot, and won’t let you go until the credits role.

This is especially evident in Lynch’s 1986 film, Blue Velvet. It’s the story of college student Jeffrey Beaumont (Kyle MacLachlan), who, while visiting home after his father nearly dies of a heart attack, discovers a severed ear and reports it to the police. While there, he meets up with the one of the detectives’ daughters, Sandy (Laura Dern). She tells him that the ear has something to do with the enigmatic Dorothy Vallens (Isabella Rossellini), a local lounge singer.

Dorothy has been forced into sex slavery after her husband and child are being held captive by unnerving, mean, and unpredictable gangster Frank Booth (played incredibly by Dennis Hopper, who steals the show away from pretty much everyone – and that’s saying a lot with a cast like this). As Jeffrey and Dorothy become more acquainted and eventually enter an increasingly strange sexual relationship, things begin to unravel. Frank comes by and abducts both Dorothy and Jeffrey, becoming angrier by the second at their relationship, and soon Jeffrey realizes the disturbing mess that he has gotten himself into.

Blue Velvet is a classic, known for Hopper’s frighteningly authentic portrayal of an abusive and sick-minded gangster, for its disturbing scenes, its themes of power and domination and violence. It’s a strange film, no doubt there – but it’s David Lynch. He’s able to take brilliant dialogue and spin these strange stories with utter beauty, even in the ugliest of places.

That alone should be why you check this one out.