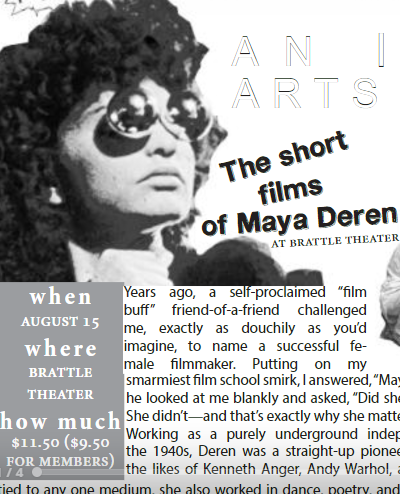 NOTE: The Brattle’s screening of the Short Films of Maya Deren has been postponed until a to-be-determined date in the fall. Nevertheless, everything below still stands. Keep an eye on the Brattle calendar for the program’s new date. And you should still go see The Witch on Wednesday, 9/15, because that movie also rules.

Years ago, a self-proclaimed “film buff” friend-of-a-friend challenged me, exactly as douchily as you’d imagine, to name a successful female filmmaker. Putting on my smarmiest film school smirk, I answered, “Maya Deren.” As predicted, he looked at me blankly and asked, “Did she do any studio work?” She didn’t—and that’s exactly why she matters.

Working as a purely underground independent filmmaker in the 1940s, Deren was a straight-up pioneer, paving the way for the likes of Kenneth Anger, Andy Warhol, and David Lynch. (Not tied to any one medium, she also worked in dance, poetry, and photography, and extensively studied the Vodou religion of Haiti). Her most famous film, 1943’s MESHES OF THE AFTERNOON, is a milestone of spooky surrealism, in which Deren is pursued by a mirror-faced spectre to the strains of a spare, experimental score by Teiji Ito.

For the unfamiliar (or the initiated), the Brattle will present a program of Deren’s work (including MESHES) in a double feature with Robert Eggers’ excellent, Deren-influenced THE WITCH on 8/15, as part of their summer-long series HEROIC! WOMEN WHO INSPIRE. See it, and remember the next time you hear a hackneyed mansplanation of auteur theory: as always, women were there first.