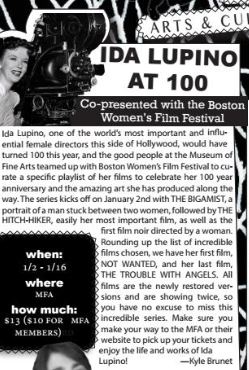 Ida Lupino, one of the world’s most important and influential female directors this side of Hollywood, would have turned 100 this year, and the good people at the Museum of Fine Arts teamed up with Boston Women’s Film Festival to curate a specific playlist of her films to celebrate her 100 year anniversary and the amazing art she has produced along the way. The series kicks off on January 2nd with THE BIGAMIST, a portrait of a man stuck between two women, followed by THE HITCH-HIKER, easily her most important film, as well as the first film noir directed by a woman. Rounding up the list of incredible films chosen, we have her first film, NOT WANTED, and her last film, THE TROUBLE WITH ANGELS. All films are the newly restored versions and are showing twice, so you have no excuse to miss this incredible series. Make sure you make your way to the MFA or their website to pick up your tickets and enjoy the life and works of Ida Lupino!