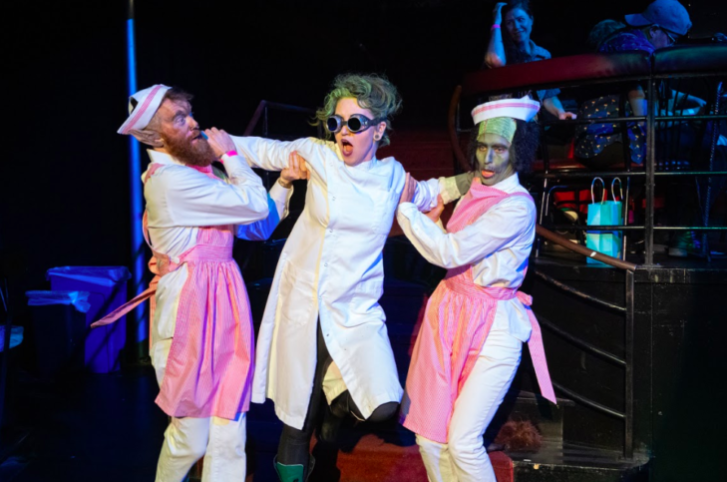 According to TinkerHell, one of the Boston Arm Wrestling Dames ringers, “There is so much that goes into the art of the arm wrestle.”

The defending champion continues, “You’ve got to be willing to sacrifice for your art. That means hours at the gym, flipping kettlebells back and forth with one hand to improve your forearm strength. Hours sweating it out as you pump iron to increase the mass of your biceps and triceps. Hours studying film of arm wrestlers from around the world. Hours of watching Sylvester Stallone in the 1987 classic Over the Top. Not to mention the amount of time you’ve got to spend thinking of trash talk for your opponents and getting glam for the ring.”

Founded in 2012 and resuscitated under new leadership last year, BAWD is a “volunteer-powered collective dedicated to supporting local organizations working to dismantle the patriarchy.” With its next tournament, a benefit for the Boston Alliance for LGBTQ+ Youth, going down Nov 17 at OBERON, we asked about its fight nights and BAWD’s mission to use theater, athleticism, and philanthropy to “empower women and others negatively impacted by the patriarchy.” All answers come from a composite of BAWD vols, with specific attribution where applicable.

DigBoston: The show promises a combination of “comedy, theater, and athleticism.” What would you say is the category-by-category percentage breakdown?

It’s about two hours long, containing three rounds of arm wrestling. In the first round, all eight wrestlers face off in four matches; in the second round, the top four face off in two matches, and the final round is the top two. Sometimes the matches go by in an instant and sometimes they last such a long time—your own arms will start to hurt. In between the rounds there is halftime entertainment; for the upcoming tournament we will have performances by Nüqueer Power and Rowan Deepe. Through the whole thing our MC Royal Jelly—she’s a glamorous jellyfish—provides witty commentary, and members of each wrestler’s entourage sells raffle tickets for prizes. over $700 worth from 15 different places.

DB: What are some pitfalls to avoid when wrestling for charity? Is it safe to say that it’s good to avoid horrific arm-splitting injuries at events like this?

BAWD: We have two referees, Chaotic Neutral and Ruthless Badhair Sinsberg, who are well versed in arm-wrestling safety. Our wrestlers go through multiple training sessions to learn the strategies involved in safe arm wrestling. The refs are on the look out for “fouls” … so wrestlers have to be sure to keep at least one foot on the ground at all times, keep their nonwrestling hand on the designated post, and keep their wrestling arm’s elbow on the table. If a wrestler fouls, the bout ends and the wrestlers switch arms. Each match consists of three bouts, usually right—left—right in terms of which arm is wrestling. Left-handed wrestlers can call for “southpaw” and a coin will be flipped to determine whether the match will start with the left or the right hand. Or, as we saw in the match between Rosie Ringling and Dr. Nadia Friend last May, a wrestler may purposely foul to get the chance to use their stronger arm.

Says ref and trainer Chaotic Neutral: “What? Arm-splitting injury a pitfall when wrestling for charity? Certainly not. In fact, injuries are central themes to a lot of charity raising. Who are you to discriminate between body parts? However, yes, I’m pretty sure one or two wrestlers come to mind that are psychologically equipped for such a feat. But, I stop them. I stop ’em real good.”

DB: What does it take to be a championship arm wrestler?

BAWD: In the words of two-time defending champion TinkerHell, “You’ve got to have the right crew. Surrounding yourself with successful people makes you more likely to rise above as champ. Your team has got to be willing to put it all on the line for you, and you’ve got to be ready to do just the same for them. But, above all, you’ve got to have guts and an unshakeable belief in yourself. It doesn’t matter how much trash you talk or iron you pump if you don’t come to that table ready to lay your heart and soul on the line for the glory. You’ve got to be willing to sweat it out, and hang in there, resisting defeat, drawing on the triumph of the human spirit to overcome your opponent time and again. A champion arm wrestler is bawdy, and fearless, and fierce, and brave.

DB: What does it take to be a member of the Boston arm-wrestling dames? And once somebody’s in, how do you go about developing a character?

BAWD: Rage against the patriarchy, determination to win are the key characteristics. There are all sorts of ways to be a member, not just arm wrestling in a tournament—we have entourage members, follow spot operators, raffle managers, and more dedicated volunteers who are passionate about putting on a great show and raising a ton of money to smash the patriarchy. Really anyone who comes to the show and has a good time and contributes to the cause can be said to be a member of BAWD!

Says host Royal Jelly: “Interest in wrestling with BAWD has been increasing so it’s possible the vetting process may get more rigorous, but for now most of our wrestlers are people we know with a theatrical flair and solid biceps who are excited about volunteering time for the causes close to our hearts. Many of our wrestlers are performers who enhance the dramatic quality of the show. We also value folks who are invested in being badass at wrestling to bring intensity to the competition. We may be competitive on stage but we really enjoy training and rehearsing together to create a dynamic show.”

Our wrestlers come up with their characters by searching deep in their souls for their badass alter ego … and sometimes we brainstorm as a group to perfect the name. Each wrestler also has an entourage that fits with their character—Dr. Nadia Friend, for example, has her lab assistants who happen to be a Franken-monster and a wolf man. The entourage members sell raffle tickets on their wrestler’s behalf throughout the show, and the wrestler whose entourage raises the most money wins a prize—so it pays to have an engaging entourage.

DB: Do any of the members have cool arm-wrestling tattoos? Presumably on their arms?

BAWD: Note to self: make BAWD temporary tattoos. No arm-wrestling tattoos so far, but if you’re interested in getting one yourself our wrestlers offered up these suggestions. “I don’t have one, but everyone who wants a tattoo should get one of the BAWD logo and/or the arms that Sophia stitched onto the belt,” Tinkerhell says. “If I were to get a tattoo, I would get one of those tiny arms on each of my own larger arms.” Punky Brewzer adds, “Plenty of tattoos on my arm but no arm-wrestling-themed tattoos… yet. I could see the table being a cool tattoo. Or a BAWD with very impressive arms.”

DB: Tell us a little bit more about your decision to do this upcoming event for Boston Alliance of LGBTQ+ Youth.

BAWD: For each tournament we choose a beneficiary who receives 100% of the proceeds from the event. When BAGLY came up as a possibility, a number of our volunteers chimed in that they themselves, or someone they know, have been positively impacted by BAGLY’s work. We love that their programs are all youth led and adult supported, giving young LGBTQ folks the chance to take charge, strengthen leadership skills, and be empowered to make change in their community and world.

DB: How much of a metaphor, if at all, is arm wrestling for other challenges and struggles that one might face outside of the ring?

BAWD: In the current political climate, it’s easy to feel defeatist. By lifting up and showing off the strength of women in our community we hope to counteract that powerlessness. There’s something about screaming and cheering on badass ladies while knowing that you’re raising money for a good cause that really helps lift the spirits out of the daily pits of doom we get sucked into.

Chris Faraone is the News+Features Editor of DigBoston and the Director of Editorial for the Boston Institute for Nonprofit Journalism. He is also the author of four books including ’99 Nights with the 99 Percent’ and ‘Heartbreak Hell.’

Liked it? Take a second to support Chris Faraone on Patreon!