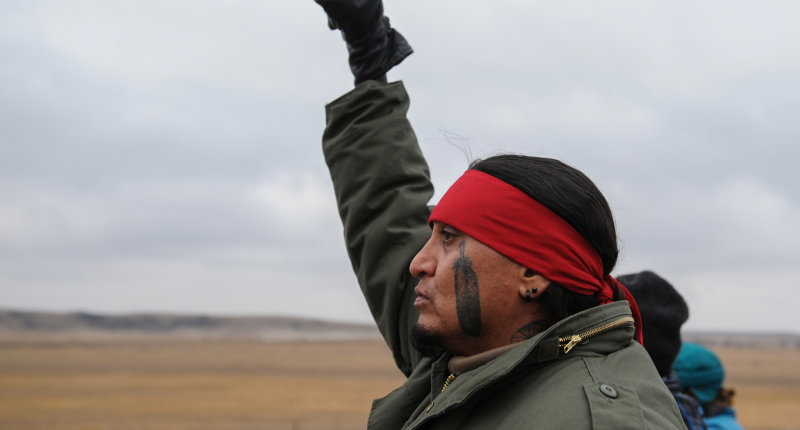 Though my time spent at Standing Rock was brief, the journey ultimately, was an unforgettable experience. I went shortly after militarized police attacked water protectors in frigid temps with water cannons, along with stinger grenades, rubber bullets, tear gas and an LRAD (Long Range Acoustic Device). After this battle in late November, many water protectors were dealing with PTSD-like symptoms, and trying to heal. Not only did they feel great emotional pain, many were quite sick due to
climate conditions. Hypothermia is a serious threat to anyone living outdoors in the North Dakotan winter, and local police indefinitely blocked highway 1806, which prevents local emergency services from quickly getting in and out of camp. Many out-of-towners went home after the Army Corps of Engineers stated that the permit to build under the Missouri River would not be granted. The celebration for this victory was brief. The fight isn’t over yet. Not everyone can leave, because for some, Standing Rock is home.

As Trump steps into office, the decision made December 4th could easily be reversed (and is in the process of being so – ed.). Water protectors are still out there in the icy cold, under surveillance by police and DAPL (Dakota Access Pipeline) security daily. I got to witness firsthand low-flying helicopters and drones in the no-fly zone that the authorities issued. Going to Standing Rock is one way to show your support for the cause, sending donations, another. People don’t seem to realize aside from this, how they can do something from home to help. Sharing information on social media is one way, writing your senators and representatives is another. Not everyone is aware however, that where you do your banking is a greatly significant piece of the pie.

The Dakota Access Pipeline is a 3.8 billion dollar project, and that money has to come from somewhere. This is where Big Banks meet Big Oil, and they exchange vows. If you bank with one of the institutions funding this dangerous, unjust project, (the list is extensive) and you are no longer okay with your money being used to fuel corporate genocide, you can DIVEST TODAY. It’s not so hard to do. Credit Unions work to keep your money safe in a similar way, but they aren’t owned by corporations. I closed my account with Citizens Bank and opened one with Tremont Credit Union. Right in my neighborhood, totally convenient. TD Bank, Citibank, Wells Fargo, Bank of America and Chase are just a few others invested. People tend to think that as an individual, their choices don’t count or matter too much. In this circumstance, taking your business and money out of a bank and putting it elsewhere because you stand with Standing Rock, now that’s huge. And when a lot of individuals make that decision, it has real potential to make change. If all banks withdrew their financial stake in the Dakota Access Pipeline, it would be a game-changer. Now let’s move some mountains, kids!

Some helpful resources and numbers to call expressing your concerns with the project. You can find plenty of guidelines of what to say online, and there are many points to make, so call often! There are also lists out there of all the banks and their contacts, so you can call and directly urge them to
divest. Ask them to clarify whether their funds have supported the heavily militarized police and their excessive force.