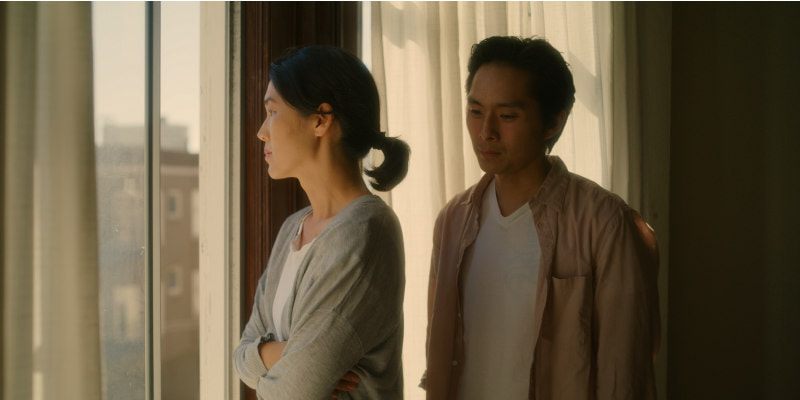 In Korean, there’s a special word called “son-mat“, which translates to “hand taste.” Homemade and store-bought food have their own set of nuclear codes on the tongue, but “son-mat” has a delicate uniqueness, a quality that can’t be promised even if a multi-generational recipe was followed to a T. It may have stemmed from the biological hypothesis that the organisms from our palms can contribute to a deeper taste in the julienned vegetable stir-fry for japchae or the pear-based marinade in kalbi. Often, it’s associated with a mother’s labor, where hours of preparation can be wolfed down in minutes. But there is another application of “son-mat,” a kind that brushes our memories. When Chang-rae (Justin Chon) is butterflying beef short ribs, he is careful not to slice it off the bone. His mother’s voice echoes through the kitchen: “The meat needs the bone nearby to borrow its richness.”

Based off the 1995 New Yorker article by Chang-rae Lee, Coming Home Again dwells on the author’s grief and eventual acceptance over his mother’s final days from her stage IV stomach cancer (“Particularly cruel,” Chang-rae notes, knowing that her inability to eat may as well be another fatal condition). The article was published about four or five years after his mother’s death, written in a perspective that wistfully acknowledges his mistakes as a youth and as a caretaker. Twenty-four years later, the film is another revisitation, but Chang-rae is reliving the mornings where he fills his mother’s intravenous nutritions, where he smells the vomit coating the carpet beside her bed.

Though the film traces Chang-rae’s meticulous actions of caring for someone, I think it’s important to remember that our growing perception of his selfishness, though not implicit in his overall intentions, is a normal response to a film that seems like it should be about selflessness. As the known favorite child who left his family to attend high school in Exeter, examples of Chang-rae’s spoiled nature seems unbearable at times. But we have to be patient with him since one, he has to be this way in order to obtain to that 1995 article-level of peace, and two, we didn’t have to be his mother.

Wayne Wang, director of past fine motherhood tales The Joy Luck Club and Maid in Manhattan, carefully lays the distinctions between mother and child, even in the apparent switch in dynamics, to show that caring is more than the physical act of service. Chang-rae uses a cleanly functional peeler for Asian pears in the kitchen while his mother uses a short knife to sculpt something more polygonal, letting the peels fall in a plastic bag on her lap. Her concern with Chang-rae’s life, such as his willingness to give up his career and girlfriend in New York to take care of her, supersedes her own afterlife affairs. While it’s understood that she has made life-altering sacrifices, it doesn’t make sense to her that Chang-rae should reciprocate with his own sacrifices. That is the nature of the always-giver; acts of service only flows one way.

The funny part about this sentiment is that while Chang-rae’s mother gives so much away, there are hidden secrets about her life, a common maneuver in the secret playbook of the Asian parent. The biggest fear is that we have to wait until death’s close dancre to have these meaningful conversations. With that biggest fear comes tumbling all of our regrets, a secondary pain that comes in hand with losing someone. Coming Home Again can help ease the pain, or for others in this situation, open that conversation.

Screens virtually at BAAFF on October 24 @4PM and will be available until October 25! Q&A with director Wayne Wang and producer Donald Young to follow.