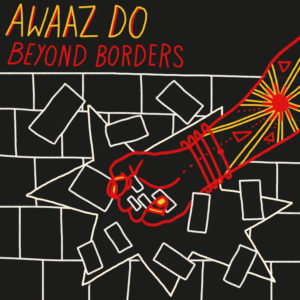 The title of Boston rock band Awaaz Do’s upcoming self-release – Beyond Borders – is a fitting name for their album, and I’m doing them a disservice in pigeonholing them as a “rock band.” Sorry, Awaaz Do! Y’all are way more than that, and you’re officially about to let the world know.

I’ve been catching Awaaz Do since their inception and am a giant fan. (Disclaimer: I formerly played music with Awaaz Do’s front woman Saraswathi Jones and, as such, am friends with Jones and her partner Azhar PH, also Awaaz Do’s bassist.) I’ve watched them evolve from a band doing surf-punk-metal covers of Bollywood tunes (also super good) and got a sneak peek at Beyond Borders, slated to be released by the end of June.

I’m especially enamored with the first two tracks from their upcoming release, “Raag Jag” Movements 1 and 2, which beautifully introduce their genre-bending music style. “Movement 1” enters softly with the drone of a tanpura fading in from a silent background. Guitarist Jagdeep’s very patient, sitar-like guitar solo is layered a-top for over two minutes before the double-headed beat of a dhol and hand-drumming of a tabla by Sapan and Chhavi (respectively) gets dropped in for rhythm. The rhythm and melody evolves, becoming more melodic, the instruments gently playing off one another for the duration of “Movement 1”’s nearly four and a half total minutes.

And then they throw your heart into your throat.

“Movement 1” slams into “Movement 2” with the guitar’s distortion pedal fully and loudly engaged, coupled with the introduction of Socheata’s standard rock drums joining to assist on rhythm. Jones’s voice echoes throughout, a lyric-less but present anchor. The bass holds down a steady beat, we’re gifted with something like a Tony Iommi-style solo, and the song culminates in a chugging guitar before fading back to the solo drone of the tanpura. The tanpura persists through both movements, ultimately beginning and ending them both, serving as the ground on which the rest of the instruments walk.

Good God, I love those “Movements.” I love that two songs without lyrics can cleverly say so much about a band’s musical sensibility, and I love what they represent played back-to-back. Different sides of the same coin, these tracks allow Awaaz Do to stretch within and beyond their limits, and they do so effortlessly. They are both soft and hard, both quiet and loud, both rock and more. Beyond Borders indeed.

Apart from the first two tracks, Awaaz Do includes on their upcoming album an interesting handful of songs that Break Down the Walls of whatever label you want to try to give them. Originally composed by Awaaz Do for Huntington Theater Company’s 2017 production of The Who and The What, “Old Time Rebellion” is a great example of a honky tonk tune straight outta cattle country, Jones’s typically soulful crooning lending itself to that Patsy Cline/Tammy Wynette style of singing pretty easily. It’s included on the album, Jones said, “because as a band, we have a lot of stylistic versatility. We’re an eclectic group of people with diverse personal tastes and cultural influences from our families.”

That versatility shines throughout the rest of the songs on the to-come album, too. “Surya” begins with a very funky bass and wickedly fun rhythm on the part of the dhol and drums. It includes more of Jagdeep’s Black Sabbath-inspired guitar solos, which are enviable, admirable, all of the ‘-ables’. “Kitty Party,” an homage to that Rage Against the Machine style of rock in both its rap-rock sensibility and its overt political tones, is called by Jones as, “a tribute to the community of fierce South Asian aunties in Boston and Cambridge who work tirelessly to educate themselves and others on the histories and struggles of marginalized people throughout the world.” Hell yeah.

The album culminates with remixes of two previously released singles, “R.L.M.” and “Shakti.” “R.L.M.” holds an especially dear spot in my riot grrl (/lrrrkhi) heart, reminiscent of Bikini Kill’s “Rebel Girl” musically, calling for revolution, for resistance, for the raising of the collective and communal fist.

“Shakti” closes the album with driven and unapologetic force. Called “a tribute to the power of the divine feminine” its galloping guitar and solid beat underlies Jones’s vocals as she pushes her limits, seeming to offer up the greatest extents of her voice as a gift. It’s a fitting closer.

Beyond Borders will be available for streaming on Bandcamp, Spotify, Apple Music, and other streaming services at the end of June 2019 with CDs available in July. It follows the release of their first EP Kite Fight in July 2016. No official announcements yet, (and in spite of Jones and Azhar’s relocation to the Southwest a few months ago) but stay tuned to catch Awaaz Do live on the East Coast this summer.

Update: Beyond Borders officially became available on June 5 – you can grab it at Awaaz Do’s Bandcamp.