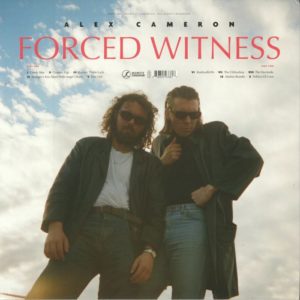 Australian songwriter Alex Cameron will play The Middle East Upstairs with the equally eclectic Jack Ladder as a supporting act on October 6th in support of his second album Forced Witness, released on Australian label Secretly Canadian. Produced by himself & Jonathan Rado of Foxygen, Forced Witness expands on Cameron’s persona of a porn-addicted sleaze-ball & show-biz hack.This album, however, is a departure from his debut album, the minimal & gritty Jumping the Shark.

The appeal of this collection of songs to most men is that Cameron’s eerie lyrics are too close to our basest sexual desires for comfort. To women, Cameron paints himself with a charming sympathy that evokes Nabokov’s famed novel Lolita. To me, his music depicts a modern day Humbert Humbert–an abscess of 1950’s cultural imperialism thrown into the dispersion & true human reality of 21st century L.u.v.

What seems like a one-off shtick incorporates all of the worst elements of American music & skids across numerous other elements that always spin back to a cosmic beat.  The music itself has an otherworldly quality grounded in a tapped yet brutally honest lyricism. These lyrics from the song “True Lies” shove the album into surreal directions:

This direction in songwriting, steeped in the Internet age, is carried throughout the album & into the most sincere piece “Stranger’s Kiss.” This delicately crafted duet with Angel Olsen is about a skittish newfound freedom born of a breakup soured by a new age of technology & parody. ‘They made a meme out of my legacy darling’ is one that clearly displays the arc of life after failure & the grisly, unforgiving side of human nature that makes shrewd social Darwinists giddy.

Though typically cast as a ‘high-concept’ musician, I disagree with this portrayal. Cameron just keenly & honestly displays the grotesque yet too true lives of bloated & forgotten show business ‘icons’. Peering into this mirror, Cameron shines a light not only on iconoclasm, but also into the dynamics of every social power exchange, be it manual labor, a newfound online love affair, or purchasing a ticket to a show.

The brilliance of Forced Witness comes from a strange liberation that you can feel on the last track, my favorite, “Politics of Love.” It’s a driven ballad delivered over a neatly crafted sonic landscape whose lyrics read with the energy of a Dadaist poem afflicted with a vulnerability of someone at the end of a terrible journey. Forced Witness is a product of the online culture from which it sprang. Unlike the sleek & cold narratives of the online world, Cameron clears the pathways for deep confessions, ironic if not impulsive dancing & a freedom of starting over again.