Today through Monday, the Brattle Theater is presenting a rare and special series with Wicked Queer, an organization that presents the Boston LGBT Film Festival annually.  It’s special for many reasons; for one, it brings to the silver screen films that were the very first of their kind, like Todd Haynes’ Poison, or Cheryl Dunye’s Watermelon Woman, the first feature film by a black lesbian. Watermelon Woman is the first of this series, kicking off a weekend of romance, intrigue, noir, history, and tragedy. In total the series is comprised of eight films, most of which are shown as double features.

There are many ways in which this series is important, standing out as a unique opportunity to see films that don’t get shown very often.  My understanding of this uniqueness centers on the existence of film itself as a very new medium of expression, considering the length of recorded human history (of course, this history is also a mere blink of the eye in terms of all history, but anyway).  LGBT+ cinema is so incredibly new – the advent of New Queer Cinema, arguably the first manifestation of filmmaking as a decidedly queer one – took place roughly two and a half decades ago when film critic B. Ruby Rich coined the term. You could reasonably argue there hasn’t been enough time to digest and measure the impact of this kind of cinema.  But there’s also the fact that so much has changed in the decades since New Queer Cinema is said to have begun.  Realizing this, I’m forced to consider how to reconcile such conflicting notions.  There’s no simple answer, of course, but I think it’s at least useful, if not illustrative of a greater complexity, to look at these films as a window into both a past and a future.

I use the indefinite article ‘a’ to point out that there is no single, definitive history for communities that remain marginalized by society, like members of the LGBT+ community. This isn’t to say that there aren’t shared, universal features of marginalization that serve to unite the struggles of LGBT+ communities across space and time, both on the streets and in artistic representation.  If we learned anything from the disaster that surrounded Roland Emmerich’s Stonewall (I haven’t seen the film and can’t comment on the result of his efforts), it’s that the misalignment of historical narratives, even slight or perceived ones, really matters to a lot of people.  These gaffes also impact how likely people are to access and support art.  When New Queer Cinema appeared on the scene, this kind of discussion wasn’t happening to the same degree that it is now, showing us one side of its cultural legacy.  One of its most important consequences was providing representation of gay and lesbian people; for the first time, for so many people, they could see someone who was like them, and on the big screen, no less. 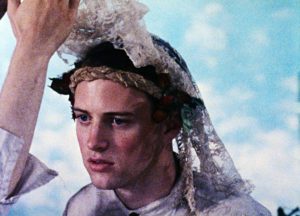 Representation was a subversive act. Indeed, “New Queer Cinema was oppositional at heart, founded on the intersection of radical politics and radical art,” as Dennis Lim reported in the New York Times just a few years ago.  Ira Sachs, a gay Jewish filmmaker, recounted that films like Todd Haynes’ Poison “made being a queer filmmaker something one could aspire to.”

There are two films in the Wicked Queer series that integrate queer and Jewish identity, bringing us back in time to the rise of nazism in Germany and the onset of the Holocaust.  Shown back to back on 35mm, Aimee and Jaguar and Bent portray a lesbian and a gay male couple, respectively.  They illuminate the persecution of homosexuals in Nazi Germany, which has not received much cinematic representation.

Bent, a flashy and decadent production in its first half, revealing the nightclubs of Berlin in the 1930s, turns into a heart-wrenching story in its second half. Aimee and Jaguar wrestles with Jewish and queer identity in a different way, and reveals itself without ever transitioning to the concentration camps. Yet the threat of oppression lingers throughout, confronting viewers with a painful and harrowing history. 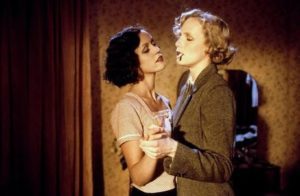 Before B. Ruby Rich coined the term New Queer Cinema, filmmaker Todd Haynes produced the film onto which the label was projected.   His ‘inauguration,’ in a manner of speaking, of this new kind of cinema, inspired many others to continue in that tradition, to tell the stories that mainstream society – including the likes of vocal politicians – were still ferociously opposed to hearing.  He was a student of philosophy, studying semiotics – like the main character of Lisa Cholodenko’s High Art, another film in this series  – at Brown University.  It is of note that in this first installment of New Queer Cinema, of the early 90s, mostly men were making films about mostly men.  Of course, Haynes has made a number of films led by female stars, including 2015’s controlled, quietly atmospheric Carol. This, for me, brings to mind a question: does Carol belong in a new class of queer filmmaking? And, by extension: does there even exist such a ‘class’ at this moment in time, in the same way that New Queer Cinema was a movement of its own?

Years before Todd Haynes made his first feature, Poison, Gus Van Sant made his own debut with Mala Noche, centered on a rendition of writer Walt Curtis, which screens just before Poison on the final day of Wicked Queer. Released the same year as Donna Deitch’s Desert Hearts, which screens in the series on Saturday, both Mala Noche and Desert Hearts are celebrating their 30th anniversary since premiering. And both are set in rural landscapes with fairly to-the-point story lines played out over bluesy tunes, lending to a feeling of laid-back country life. They are subtle reminders of the hidden struggles that LGBT+ people face in these kinds of places, where there are rarely avenues to access necessary resources on issues like sexual health and well-being for LGBT+ youth and adults alike.

But of course, it’s not just the rural peripheries of the US that lack resources which LGBT+ communities need.  Perhaps the story of the Wachowskis’, who have both come out publicly about their gender transitions recently (Lana in 2012; Lilly just this past March) illustrates the need for more resources to help youth who do not fit within a narrowly defined gender binary. Their first feature, Bound, which screens on the first and second nights of Wicked Queer, stands apart from the emotional storytelling of other films in the series.  A neo-noir crime film, it stars Gina Gershon as an ex-con whose gender presentation is notably masculine.  She falls for Violet, the long-time girlfriend of a Mafia member, who is hopelessly trapped in her relationship (somewhat like the protagonist of High Art, though Bound involves more imminent danger and excitement).  In tone, Bound is most similar to Mala Noche; in both films, it’s never completely clear who is on whose side, or if there are any good sides to begin with. Subtle manipulations appear at almost every turn, and the manipulators are very aware of their actions. 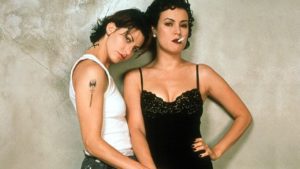 Lisa Cholodenko’s feature in the series, High Art, which screens after Desert Hearts, takes us from the country to the city, set in the urban art world of New York City, where protagonist Syd is assistant editor on a ‘high-art’ photo journal.  Her relationship with a longtime boyfriend has grown bored and passionless; thus enters Lucy, a once-famous photographer who became overwhelmed by the pressures of success, and has since retired.  Syd is captivated by both the artist and her work. High Art manages, in the end, to convey a side of sexuality that is at once alluring and measured.  We see the excitement of Syd’s new relationship verge on the dangers of over-reliance, while other issues of dependence, such as substance abuse, are portrayed in a sympathetic light. High Art‘s portrayal of queer relationships, with semi-gritty undertones against the backdrop of the chaotic hub of energy that is New York (where creativity tends to shine brightly and fizzle out all too soon), shows us a powerfully realistic message about love and longing.  Relationships don’t always work out.  And in the end, tragedy strikes.

The tragic gay love story, as many of us know, has been an overplayed trope for many decades.  The fact that The Price of Salt, on which Haynes’ Carol was based, had a happy ending with respect to a lesbian relationship, was remarkable at the time of its printing in the 1950s.  In television, the continued use of this trope shows us that, evidently, it has commercial value; increasingly it is criticized and questioned.  The films in this series certainly have their share of tragedy, but not purely because of characters’ sexualities.  Watermelon Woman showcases the ups and downs of emotional connection, for example, providing another highly realistic portrayal of lived experience within a socially marginalized body. 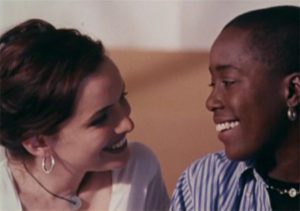 Crucially, Watermelon Woman also illuminated a platform wherein “contemporary black lesbian cultural producers,” such as Dunye, began to “carve out space for their own versions of the past” (Richardson 2011). Returning to my earlier reference that these films are uniquely situated in time and space, presenting visions of a past and a future, Dunye’s work stands out for connecting the particular struggles of black lesbians with their ancestral histories and the legacy of slavery.  This brings to light another complex structure of oppression that has rarely been portrayed alongside queer identity in a cinematic context.  What this essentially means to say is that the film is, at its core, an intersectional work, informed by the scholarship of Kimberlé Williams Crenshaw, who coined the notion of intersectionality just a few years before Watermelon Woman was produced. On this note, I’m reminded of Dee Rees’ Pariah, a more recent example of intersectionality in film format.

Again, thinking of films like Pariah (and Carol), I’m left to wonder whether any unified sense of “queer cinema” exists at this point in time; and I’m not sure if it’s a big deal, anyway.  It is also easy to question whether the films in this series were ever part of the same ‘movement’ (and surely this consideration has also been made by the series’ organizers).  What they share, in the end, is a rigorous commitment to the most compelling nuances of storytelling, as well as their creation of a more open platform for filmmakers to explore the complexities of being queer, in any or all of its forms.  Through their films, history has begun to pass, and we can only hope that it is in turn transformed by the revolutionary potential of cinema and art. 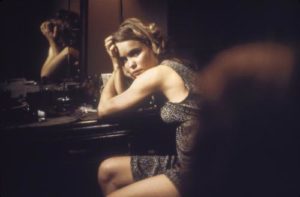