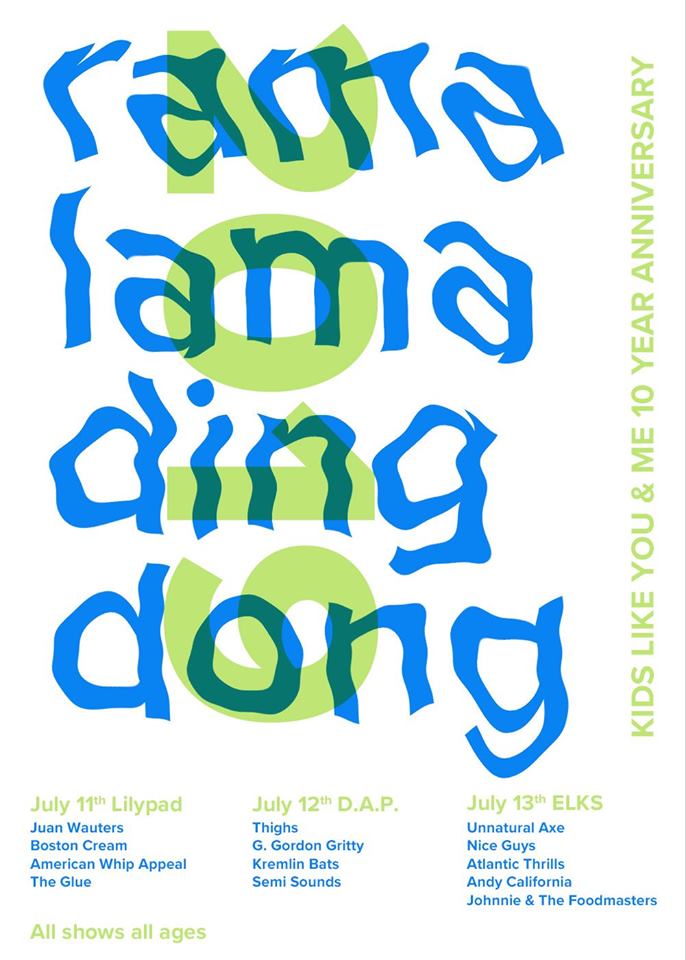 For the uninitiated Boston undergrounder, The Kids Like You and Me are textbook. That means Rama Lama Ding Dong is this years thesis assignment and the only thing you need to do is get the gig.

In celebration of this booking collective’s ten year anniversary, they are bringing their aesthetic to both ends of the red line over three nights in three venues, so there’s really no excuse not to get around town to see some of your favorite local and non-local independent artists strut their stuff.

Rama Lama Ding Dong Fest is this Thursday July 11th at The Lilypad Cambridge, Friday July 12th at Dorchester Art Project and Saturday July 13th at Hardcore Stadium. In case you need more details, check out the interview we did with Glen and Chris below.

Boston Hassle: Tell us about this year’s upcoming Rama Lama Ding Dong fest. Any favorites of yours and bands to keep your eye on?

Glen: Too difficult to pick favorites but I am beyond stoked to see Juan Wauters, Thighs, and Unnatural Axe (the headliners of each night) and blessed that they are a part of this festival. All of the opening bands are honorary KLYAMers so super excited for them, too.

Chris: We always aim to book our favorite bands and we’re extremely pleased with this year’s line up! So, pretty much the whole roster! I know that sounds hackneyed, but it’s true. We book the shows we want to see. Definitely excited to see Juan Wauters and Unnatural Axe again and humbled they are playing our fest!

BH: What is the history of this festival? Why put on a music festival anyway?

Glen: The festival is an extension of our efforts to promote underground rock ‘n roll, experimental, and noisy music. We used to do way more blogging and then we started going to more shows, and we thought, let’s do that, too. Make shows happen that we are excited about and would want to see. We like going to festivals. Gonerfest, Hassle Fest, NE Underground Fest/Summits, Fuzzstival. Let’s do it!

Chris: We’ve wanted to throw a music fest for years even before we started booking shows. We were inspired by Gonerfest (Memphis) and local fests like Hassle Fest, Fuzzstival, BUFU Fest, and several more. We’ve been doing KLYAM for 10 years (initially as a blog), but Rama Lama Ding Dong (annual fest) was born in 2016. Why put on one? Why not?! It’s a show on steroids. A good excuse as any other to have a party. Bring people together to enjoy some stalwarts as well as any new favorites of ours. Hopefully expose people to bands they’ve never seen before!

BH: Booking this thing looks like a mammoth task. Why did you choose the venues you chose being that they are all so different.

Glen: It seems mammoth, but a lot of the planning started at the beginning of this year, possibly earlier. Securing the venues and the bands. That’s 90% of it. We chose venues that we’ve worked with before, which makes it easier.

Chris: Each night and show have their own character while still being part of a collective, fun Rama Lama Ding Dong experience. We selected venues that we felt matched the vibe of each show and we love them all. Lilypad is a great place for a warm, intimate show, so that was an obvious choice for Night 1 with Juan Wauters. All of Night 1’s bands play softer, chiller music: folk, country, gospel. That same night, however, Boston Cream are also playing and they ignite a bizarre disco/dance trip! We made sure to include at least one band each night that deviates from the rest, but doesn’t stick out like a sore thumb either!

Night 2 is at the Dorchester Art Project and is weird, noisy, experimental bands. G. Gordon Gritty says he’s not a musician, so there you have that. Kremlin Bats will appeal to those that are still wearing their swimmies in the outsider art pool. DAP is one of our new favorite venues. I love seeing packed shows there. Just shows in general there. Always feels like I am hanging out with a bunch of friends. Easily suits what we’re doing!

Night 3 is the straight ahead, rock ‘n’ roll punk slime night! The Cambridge Elks Lodge is the perfect venue for that. A spacious basement and no stage. It’s the Hardcore Stadium after all. Can’t say enough how excited we are that Unnatural Axe are playing and they are Boston punk legends. To see them at an Elks Lodge is a privilege. The best stadium to see the Axe!

BH: You are also a tape label. I assume there will be merch for sale. Any new merch or releases one may want to keep their eye coming from these bands?

Glen: Be on the lookout for a commemorative zine and tape!

Chris: We also have a few vinyl releases, CDs, and a book (by James Coarse)! Most of the discography will be available at the show. Some are out of stock! If people buy advance tickets to any of the shows then they get a free KLYAM Records release of their choice.

BH: What is the dress code?

Glen: Should be formal, given the occasion, but we’ll make an exception. Whatever you want!