Janet Echelman is a Brookline-based and internationally renowned artist. Her newest work was hoisted into the skies of the Rose Kennedy Greenway over by South Station last week. Suspended between buildings, the dynamic aerial sculpture, entitled As If It Were Already Here, ripples in the wind and is lit by a changing colored-light display that is actually powered by wind sensors. Covering half an acre of land, the sculpture is made of over 100 miles of rope, with fibers that are 15 times stronger than steel yet are light enough to be suspended directly from three of Boston’s buildings.

1) Can you speak to us a little bit about your new piece on the Rose Kennedy Greenway titled “As If It Were Already Here”?

It’s an ode to the way that Boston has transformed itself. My piece recalls the way that Boston has reimagined itself and dramatically changed physically, not once or twice, but many times. Beginning in the 1700s when three mountains were flattened to create more land from water. And then again in the 1950s when the central artery was opened. At this time, people were so proud because it was the widest vehicular tunnel. And the fact that we can admit that our values have changed and reclaim the land from the automobile and return it to people, as a blooming greenway, is very noteworthy.
It’s about our capacity to imagine and the importance of reimagining the status quo.

2) What is it like to work on such a large scale, with buildings as your backdrop or canvas?

I love it! It’s the perfect scale. Around the city, I see my work as a counterpoint: a soft billowing counterpoint to the hard edges of buildings in dense urban space.
I’ve always been drawn to infrastructure and changing the way we see a place that we think we know. I’m also interested in how to transform invisible places with intentionality as well as investigating what draws people to spend time together in a city.
An example of transforming space would be my sculpture in Portugal, She Changes, which has been there 10 years. It’s in the middle in a three-lane highway roundabout, and there are no crosswalks to reach it. And yet there are people who spend time underneath the sculpture even though there is no safe way to get there. That’s very intriguing to me. How do we create a sense of place?
Also, I haven’t always worked on such a large scale. I was a painter for more than a decade. But I’ve always been seeking work that you can get lost in. I didn’t set out to become a sculptor at all. It was an unexpected turn. My paints were lost while I was doing a Fulbright in India, and I embraced what was around me, which were fishing nets.
My first public art projects were very humble. My first piece was attached to the bottom of the interstate highway in Houston. It was made out of truck parts. It’s called “Roadside Shrine.”

3) Many of our readers are artists and musicians—do you have any advice for them, things you wish you knew when you were starting out on your own creative path?

I was trained as a musician, a classical pianist, and I played with the Florida orchestra when I was 14. I’m inspired by many different kinds of music, and I refer to musical forms all the time in my art.
Advice for young artists and musicians is that you can speak directly to your audience, and you don’t need to wait to be discovered. I think that’s much easier and more obvious now with social media.
Also that it’s good to find a place that has potential for growth and that hasn’t already been explored. The spaces between fields are generative. For example, the overlap between fine art and industrial craft: The spaces between these fields are fertile.

4) What is the difference between making transient art and making art that is permanent and becomes part of the city’s enduring architecture?

I like to balance temporary and permanent commissions. Temporary projects allow me experimentation and freedom. I can make bolder statements, and I even get permission to make bolder statements with temporary work.
I love permanent work too; it enables me to be part of a long relationship with people. There is a craftsmanship I require for permanent work that is necessary to withstand the elements. And this changes the taste of the work for me.

5) I learned from your TED talk that you use ancient handcraft techniques in your work such as the techniques used by net makers in India and lacemakers in Lithuania, and also that you have studied Chinese calligraphy and brush painting. Yet you have managed to repurpose these traditional arts and craft forms. How can artists walk the fine line between appropriating and reinventing others’ work?

That’s easy—don’t worry! Defy everything! Appropriate anything you can because when you use it, you will use it in a different way. So free yourself from that concern.
I was just in Amsterdam and there was a show about Matisse and it shows his early work when he appropriated the style of the pointillists and the style of van Gogh. It showed works of his that looked like other people made them but he was just testing them out.
I would say to young artists to try to copy others’ work. Just try! You won’t be able to exactly. Try to copy your favorite works and let the greatest artists be your teachers. You can quote me on this: “Self-censorship is bad.” 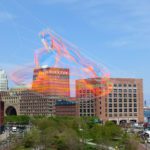 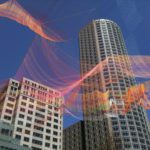 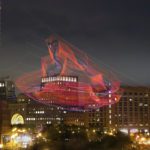 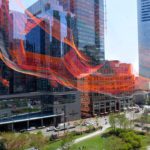 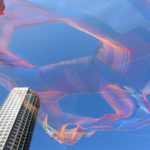 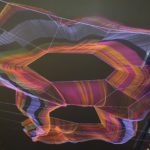