SHEER QUEER Fest is happening around Cambridge this weekend, so if there was a weekend to pull your queer self from your essential oil laden nostalgia cave called your bedroom and raise hell, this is the weekend! Show up tonight (Saturday) at the Democracy Center in Harvard Square or Sunday night at The Cambridge Community Center in between Harvard and Central Square. I’m sure last nights show at Ted’s House was lit.

If you are late to the game and are just finding out about this now, don’t worry, we all work garbage food service jobs all weekend long. So that’s even more of a reason to support some of the rawest and realest bands performing around Boston and New England and beyond. If you need more reasons to get to the gig tonight, check out the interview below with SHEER QUEER Fest Organizers, Jamezie (They/Them) and Manny (They/ Them), below.

Boston Hassle: How long has SHEER QUEER Fest been up and running?

Jamezie: SHEER QUEER Fest is currently in its third year! The first year was a single day fest (2017) and last year was our first three day fest. We’re very excited to be able to continue with three full days of queer fury and rage!

Manny: Sheer Queer Fest is Jamezie’s baby. I was unable to go the first year, but have helped the last two years and have seen it grown in size in such a short amount of time.

Boston Hassle: What makes this year’s happening different from previous incarnations, if at all?

Jamezie: This year’s fest is not totally different from previous years since we’ve still got killer queerdos coming from all over the country to tear it up this weekend, as well as short matches with our friends and favorite wrestlers of BLOWW (Boston League of Wicked Wrestlers). The major things that changes between years is who we are raising funds for. This year we are working to raise funds for UAINE (The United American Indians of New England) who are involved in a ton of important indgenous efforts including organizing National Day of Mourning. Being here in Boston we are guests on the stolen homeland territories of the ancestral Massachusett indigenous people and their descendants. Since the purpose of SQ Fest is to show support for groups and resources that are vital for marginalized communities, we felt it was important to show our support for the Wampanoag, Nipmuc, and other native communities in the area.

BH: Why throw SHEER QUEER Fest and why do you think you should people should come out?

Jamezie: Outside of being a fundraiser, the reason I started SQ fest was to fill a gap I felt I saw here in Boston for angry queers who don’t fit into what is typically queercore. I wanted to help carve out space for folks who feel failed by the queer community, who aren’t down with how tied queerness is to bar culture, or are fed up with punks who have shit poltics and are friends with actual fucking nazis (that people seem to forget are in our scene here), but most importantly I wanted folks to have space to be angry, absolutely fucking furious, and loud as all hell! There’s plenty to be mad about and I feel that folks of marginalized communities should have space to feel valid in that anger and not have to hold back. If the list of killer bands, and gay AS FUCK wrestling isn’t enough for you, then hopefully something in our intention resonates with you and makes you feel like cumming out.

Manny: There are definitely good causes to come out and support year after year especially in light of how fucked up our world has been and continues to be. As Jamezie pointed out in the previous question, we are raising money for UAINE. Anyone who occupies North American lands needs to be aware of the indigenous people whom it previously belonged to. They are STILL HERE, fighting for their rights as people. They are still the original inhabitants of this land that has been brutally taken from them. Maybe you don’t identify with punk or metal or hardcore, but you should still come out, if anything, to support a good cause. And, hey, maybe you might like the music too. This fest is also for queer people who feel they do not fit a homonormative box, who are outcast from cishet society, and need a place to scream and be angry and with each other.

BH: Which bands are you most excited to see play live?

Jamezie: It’s hard to say which band(s) I’m most excited about since we’ve got a lot of really fun new bands (both new to the fest, and recently formed bands) and of course friends from last year who are returning that I’m glad to see again. If I had to narrow it to one, I’d say I’m very ready to dance to E.T.!

Manny: There are so many awesome bands coming from all over the country and they cover such a wide array of genres. I am really excited to see all of them this upcoming weekend. However, I want to shout out Trophy Hunt and MAAFA and all of our other bands with nonwhite members. As a queer person of color, it’s awesome to see yourself represented in the music you listen to. Catch me in the pit for these bands.

Jamezie: If you want more information about the fest, you can find us on FB and IG (@sheerqueerfest). And be sure to keep an eye out for what we have in store for next year. My hope is that each year we continue to make a bigger and better fest! 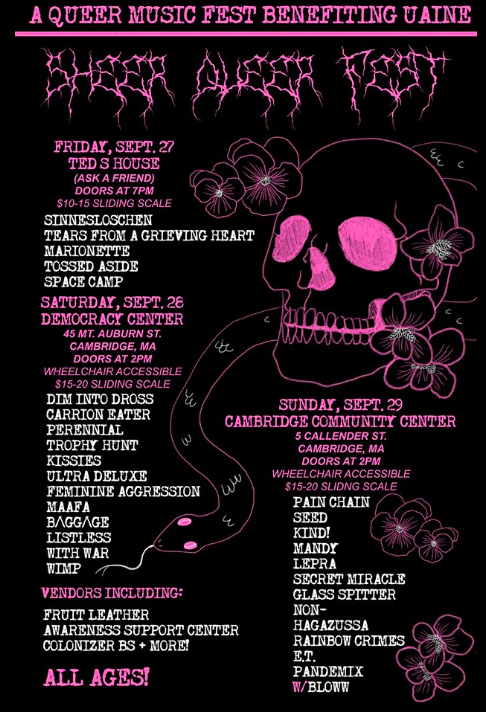 We asked Ruth Garbus some questions before her Hassle Show this weekend!

Cults, One-In-A-Million Chances, Gross Venues and the Dividing Line Between Doom and Psychedelic