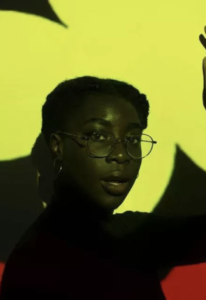 BOSTON HASSLE: How did you get involved with this particular event?

AJ ADDAE:I’ve always really liked Boston Hassle! I’ve tabled for them + Rock & Roll Heroes in the past, and I’ve gone to a few Dorchester Art Project open mics. All I really did was see that this event was happening, and I reached out to the folks over at Boston Hassle to ask if they needed any support and they emailed me right back and said something like “Hey, this is kinda short notice but do you wanna perform?” And so I said of course!

BH: How long have you been writing?  How many years in the making was Forget Me Knots?

AA: Wow, I’ve been writing for as long as I can remember. I always like to say how I wrote my first poem in third grade. It was about the water cycle and my teacher hung it up on the board. 🙂 I was always really good at writing when I was younger and I would win spelling bees and do writing competitions and do really well in them. I just knew I had a knack. Then, when I was around 16, I started to genuinely take it seriously and publish my own things, and do journalism internships and stuff like that. I kind of just decided: This is where my language is. Eventually, that same year I made my first self-published art magazine called The Gray Area Magazine, and then later on came Forget Me Knots when I was 17.

Forget Me Knots started out as a few poems I had just written about a breakup once, and then how life was so different after your first lil teen breakup. Soon enough, a few months later, it blossomed into a collection and I got the random idea one day during spring break of my senior year of high school to self publish. So I was really only “pregnant” (lol) with FGM for about a year long, you know, since that’s at LEAST how long it takes to get over your first teen breakup. In fact, I wasn’t too serious about it until I then realized way later that I had published this thing that eventually became my baby. After seeing my own thoughts tangibly in book form, I realized that I can materialize more of my art and therefore, myself – really put my feelings and love and passion and intention down on paper. Solange Knowles said “Do nothing without intention” and I take that and run with it everyday. 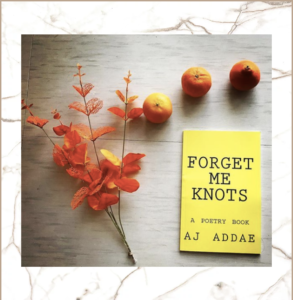 Forget Me Knots is available locally at Trident Booksellers and Café, and via Amazon and Barnes & Noble/ajaddae.com

BH: Tell us more about your visual poems.  What was the process behind list of things my hair has broken / an ode?

AA: Visual poems are definitely my current experiment, and I love it. I study design and do a few design projects and had some sort of crisis as to how I was going to integrate my love for visual design and my love for writing and it clicked immediately. My hair poem was maybe a year old before it became visual – in fact, it was just the list. Soon, I revisited it and it grew into a footnotes poem. Later on, I didn’t come back to it until one day in class when I was writing poems and doodling and I made a visual map of all the things on the “list” (of things my hair has broken). Finally, it clicked: I wanted to make this visual. I wanted to make this experimental. My crisis was over. I’ve seriously always been itching to take my poems off just the paper. I wanted more than just what you could read. I wanted what you could feel, touch, taste, experience. And that’s what the hair poem does – it guides you through the experience. You literally can’t read the poem without really participating in it. And that’s what my visual poems do. The reader becomes a literal participant in the poem.

BH: What future projects are you most excited about right now?

AA: I’m currently working on growing in my writing, obviously. Always. But I’m also working on a few more visual poems. I want my poetry to become more interactive and really, really involve the audience. I want the audience to look at/hear/see a poem and say that they were there. I’m also currently the moooost excited about my second book I’m writing right now. The growth since Forget Me Knots has been real. I hope folks enjoy it. Oh, and I would love to make a poetry EP someday. A girl can dream. 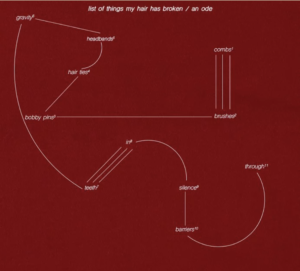 a list of things my hair has broken / an ode by AJ Addae/ajaddae.com

BH:  And, could you leave us with one of your favorite excerpts from your work?

AA: Ahhh of course! Here’s the one that I wrote about my name, which by the way is Ajoa Jamila (which is what AJ stands for):

When Told That My Name Will be Mispronounced,

massacre that rhymes with nothing

a bow and arrow that never misses.

was “almost” just the bow,

six year old ajoa asks her mother to call her by an ‘easier’ name: Taylor

there’s no “outside” of my name

and rhymes with nothing.

born on a Monday, end of winter

meaning, my mother named me after a flavour of freedom

a kind of season-long wishfulness

that not just any tongue can hold the right way

that a Ghanaian tongue can hold the right way

meaning, when you say my name,

kept it in her front pocket nearly three decades

like we live in America now, so we drop a letter

but still say it like it will butcher  you back

rhymes with nothing so it stands alone

no love song written about it

it is the love song

a Ghanaian chorus kept alive on an American stage.

you can’t fit a love song on a souvenir key chain.

nothing can be butchered if it holds a knife too.

INTERVIEW: Filmmakers Justin Landsman and Charlie Compton on ‘THE FIVE FINGERS OF A DOG’

January is many things to many people, from the beginning of a new year to the annual horror dump. For creatures of…

Projections: Science Fiction from the Art House | An Interview with The Coolidge’s Mark...

Projections: Science Fiction from the Art House screens throughout January at The Coolidge Corner Theatre!