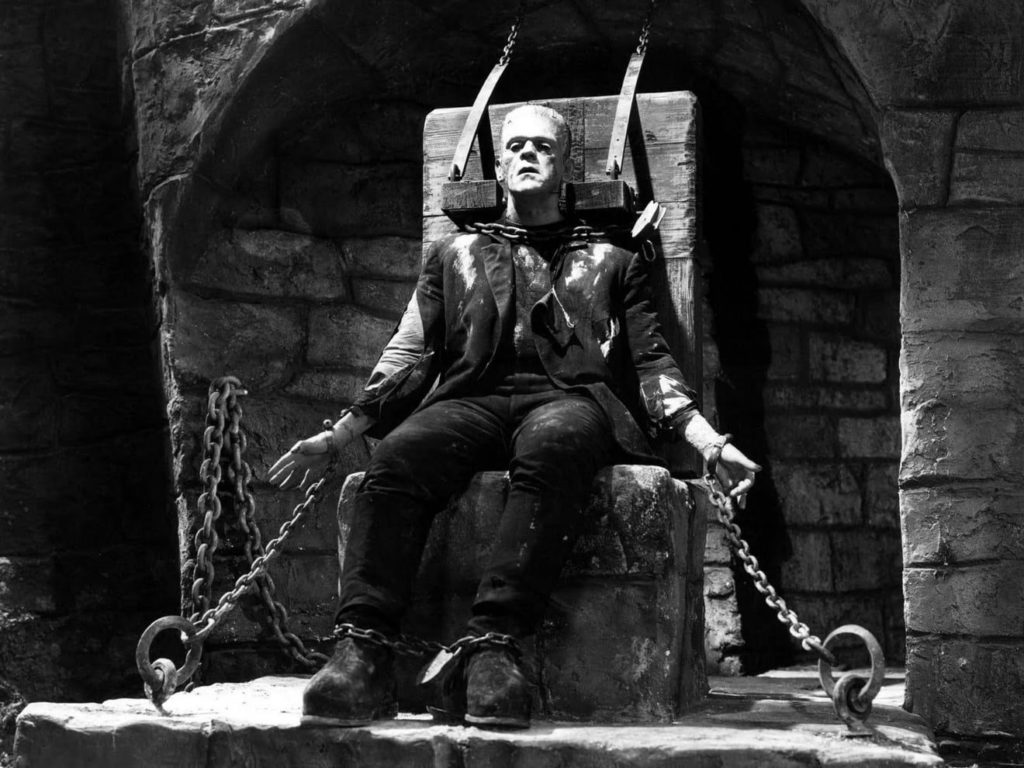 Over the past couple of centuries or so, the veritable white whale of fiction writers has been to create work as immortal as classical mythology, which weaves itself into the mass cultural psyche as indelibly as ancient folklore and fairy tales. A handful of storytellers– J.R.R. Tolkien, Stan Lee, maaaaybe George Lucas– have mostly succeeded, but modern copyright law puts unavoidable limitations on their spread, drawing a hard line between “canon” and “fan-fiction.” Frankenstein, however, is a different beast. While still closely identified with their creator (more on her in a bit), Dr. Frankenstein and his monster have been kept alive and built upon by countless iterations and adaptations. The modern conception of Frankenstein has Mary Shelley’s novel at its core, but it also contains bits and pieces added by hundreds of subsequent creators, working on stage and television and comic books and rock music and comedy and (especially) film. All of these elements have been stitched together to create a shambolic yet appealing whole, given life long after many of its contemporaries have faded.

If only there was a suitable metaphor I could deploy here. Give me a second, it’ll come to me.

The circumstances of Frankenstein’s creation have gotten a lot of press lately with the bicentennial of its publication, but to recap: a nineteen-year-old Mary Wollstonecraft Shelley spent a weekend in Geneva with her famous husband, Percy Bysshe Shelley, his famous friend, Lord Byron, and Byron’s less-famous hanger-on, John Polidori. One dark and stormy night (groan) Byron challenged each member of the group to “write a ghost story,” and Mary, despite having little experience as a writer, proceeded to blow her famous male comrades out of the water with a story that would fundamentally shape the course of horror and science fiction for the following two centuries and counting. (Interestingly, the only other lasting work to be produced that weekend is Polidori’s, largely considered to be the first modern vampire story; the contributions of the two actual literary celebrities to that challenge have been largely forgotten). 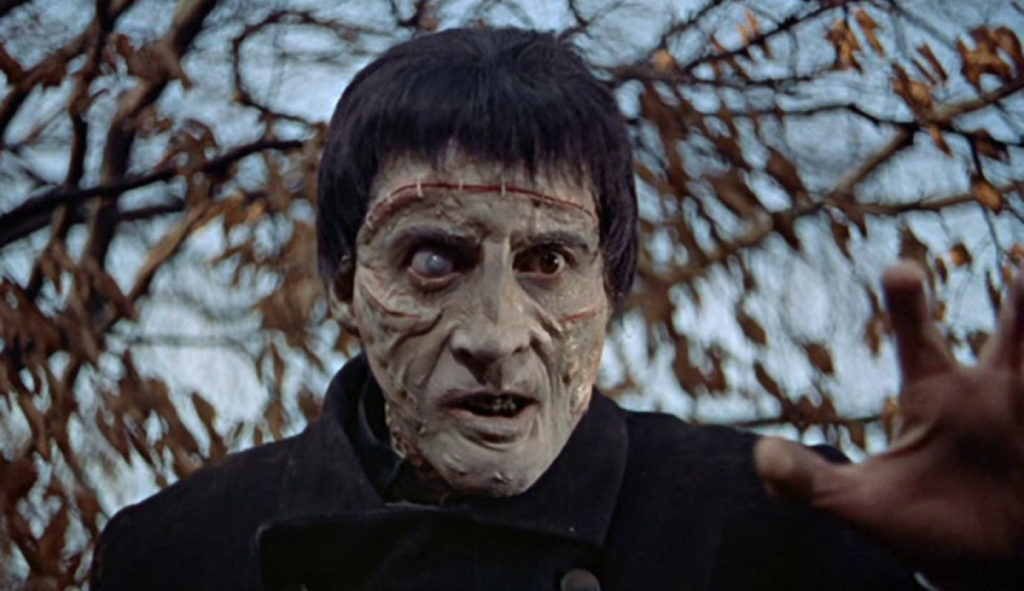 To be clear, Shelley’s novel is a hell of a book, harrowingly written and remarkably visceral for the time it was written. And yet, reading it today, it’s tough not to notice all the stuff that’s missing. There’s no bolt of lightning; Shelley’s doctor refuses to divulge his methods to the reader, and simply jumps to the point where his creation has life. There’s no hunchbacked assistant named Igor, and no mix-up at the brain shop. The monster is not only not mute, but speaks eloquently for several uninterrupted chapters— and is a cunning bastard to boot. There is a bride, but she never makes it off the slab. There’s no band of torch-wielding villagers, and certainly no cartoonish one-armed burgermeister. Even the monster’s hair is specifically described as long and flowing– a far cry from the iconic flat-top we know and love. With that in mind, the Harvard Film Archive is celebrating the lead-up to Halloween with “Afterlives of Frankenstein,” a retrospective of some of Frankie’s greatest hits which also serves as a fascinating cultural cross-section.

The series begins, appropriately enough, at Universal. James Whale’s Frankenstein (1931) and Bride of Frankenstein (1934) laid the groundwork for not just the modern conception of Frankenstein’s story, but for the monster movie in general. Whale’s films owe more to the 1823 stage adaptation (which itself is being celebrated with an exhibit at Harvard’s Houghton Library) than to Shelley’s novel, but manages to overshadow both as the definitive text. When we think of Frankenstein, we think of Colin Clive’s hysterical doctor, Dwight Frye’s scenery-chewing assistant*, and, of course, Boris Karloff’s groaning, shambling monster. Interestingly, the HFA has also included Frankenstein Meets the Wolf Man (1943), from the studio’s “second wave” of monster movies– a prototype “shared universe” in which their stable of marquee monsters clashed in increasingly contrived ways. While less widely beloved, these films perhaps did a lot of the legwork in separating Frankenstein the monster from Frankenstein the story. It is at this point that “Frankenstein’s Monster” became simply “Frankenstein,” a character whose exploits existed independently of his creator’s. This Frankenstein isn’t a symbol of man’s hubris in the face of god. He’s just a likable monster with a speech impediment and a great haircut. 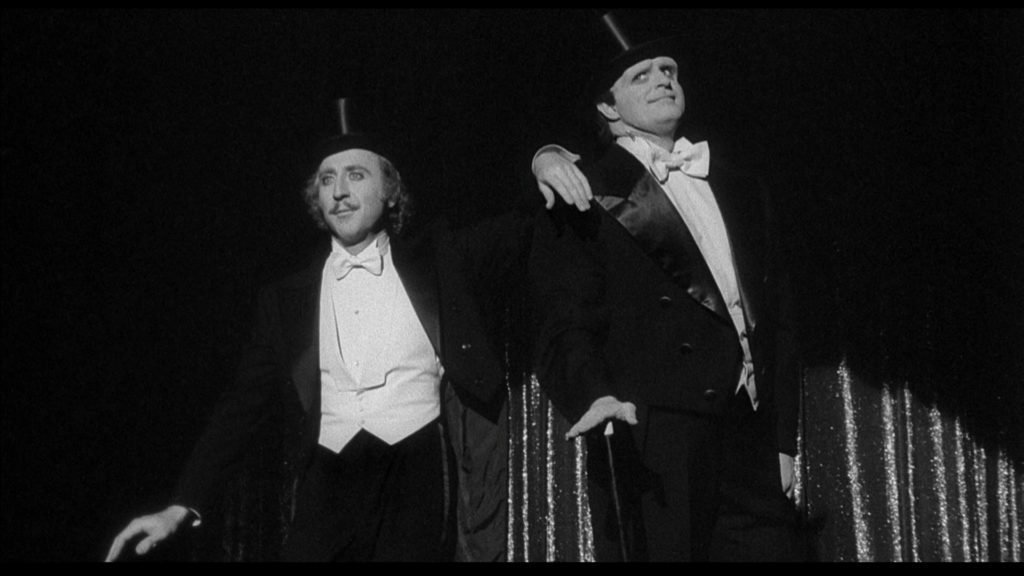 After Universal, our next stop on the Frankentrain is Britain’s legendary Hammer film studio, represented here by The Curse of Frankenstein (1957) and Frankenstein Must Be Destroyed (1969). Hammer (as well as its prized assets, Peter Cushing and Sir Christopher Lee) was best known for its bloody, sexy takes on Bram Stoker’s Dracula, but it brought that same sense of sophistication (and graphic violence) to Shelley’s creation. Cushing’s Dr. Frankenstein is more erudite than Clive’s, and Lee’s monster is far more cadaverous than Karloff’s. In the decades since, filmmakers from Andy Warhol to Kenneth Branagh have sought to throw off the corny image of Universal’s Frankenstein, only to wind up paying homage to Hammer’s. (For more on this era, check out our own Anders Croft’s take on Hammer’s Frankenstein and the Monster from Hell).

But, as with so many seminal texts, the most lasting legacy comes not from reverence, but parody. To this end, the HFA rounds out their retrospective with Abbott and Costello Meet Frankenstein (1948), Tim Burton’s original student film version of Frankenweenie (1984), and Mel Brooks’ beloved Young Frankenstein (1974). Perhaps even more so than Universal’s films (and certainly more than Hammer’s), these and other parodies have been watched and rewatched for generations, in many ways becoming every bit as important to the story’s place in our cultural consciousness (as an aside, I’ll add that, all things being equal, Young Frankenstein may actually be the most well-written and acted Frankenstein film ever made). Whether on the page of Mary Shelley’s novel or in Phil Hartman SNL skits, Frankenstein’s monster truly is alive.

* – It is at this point that I would like to address a naming confusion even more vexing than the “Frankenstein is actually the name of the doctor” debate. In both the play and the 1931 film, Dr. Frankenstein is aided by his iconic, hunchbacked lab assistant… Fritz. There is a character named Ygor (with a Y, mind you) played by Bela Lugosi in 1939’s underrated Son of Frankenstein, but, while superficially similar in mein and deformity, Ygor is less a henchman than an Iago-like puppetmaster. Further complicating things is that 1953’s unrelated House of Wax features a mute henchman (played by Charles Bronson!!) who is named Igor, though it’s unclear whether this is a cause or an effect of this confusion. It is also worth noting that none of these characters were played by Peter Lorre, despite the ubiquitous “Yessss, master!” that frequently accompanies hacky impressions.

AFTERLIVES OF FRANKENSTEIN
Runs Friday, 10/26, through Wednesday, 10/31 at Harvard Film Archive
All screenings $9 except where noted