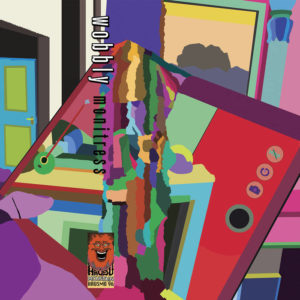 Monitress is an electronic conversation. Listening to this album is like something out of the matrix. I have been converted to machine code, my bits processed and compiled and eventually placed into a crowded electronica-cafe. Random pieces of strangers’ conversations are being filtered by my ears and placed into their subsequent boxes. I pick up fragments of the conversation between say, synthesizer one and synthesizer three, while the larger background noise is pervasive. It’s an effort to focus on just one piece, eavesdropping gets harder in busy environments.

Okay, so this is a weird way to talk about an album I’m sure, but it’s the best way I can describe this recent and phenomenal work by Wobbly via Hausu Mountain. Wobbly, also known as Jon Leidecker, crafted Monitress as a process album, an improvisational electronica project built on the way computers generate and handle MIDI information. Leidecker gives a series of mobile devices some audio as source material, running an external feed into the computers, before taking the computers understanding of the audio and running it back through a synthesizer. It’s a process that allows these different computers to interact and solo off each other, an eclectic digitized version of jazz solos. The computers are able to build stacked harmonies on each other, before running wild with more complex polyphonies. It’s synth music with texture like I’ve never heard before, lead lines jump and spin out of control over an incredible weave of bass and drumlines. It’s an unstoppable piece. A musical conversation between computers turned into something we can hear and comprehend. I doubt I have the technical know-how to even understand everything that’s happening, but I love listening to it.

Beyond even an incredible approach to process and electronic music in general, Wobbly’s work here is engaging to listen to. The chaotic nature of these electronic takes leads the brain to comprehend and give meaning to the sounds it hears. Narratives unfurl from the lead lines, buoyed by an incredible platform of “background noise” that the cybernetic texture gives us. The harmonic fields are rich and deep; wells of bass pumped through a series of translations. Despite building the process on disfiguration and randomization, Leidecker is right: it feels incredibly human. Speaking on his live performances of this piece, he mentions “We are entrained to emotional reactions when hearing multiple voices attempting the same melody. These machines may not meet our current criteria for consciousness, but every audience I’ve played this piece in front of quickly realizes they’re not listening to a solo.”

These are machines that are built to listen and process, finally given a chance to speak. An audible relationship between us and the tools we use. It’s powerful to listen to, beyond the intricate relationships between notes, beyond the rich texture. It’s an insight not only into machines, but into the way our brain processes and understands them. Into the way we humanize and give narratives to everything we come across. An insight into how we view consciousness.

Liked it? Take a second to support Ev Bauer on Patreon!