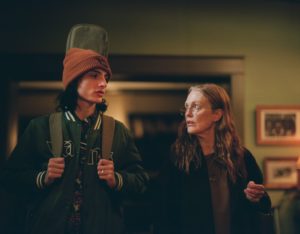 Jesse Eisenberg’s first feature film as both writer and director is quick-witted, poignant, and an overall promising start to what I hope will be a fruitful new iteration of his career. Adapted from Eisenberg’s 2020 audio drama of the same name, When You Finish Saving the World examines a mother and son longing for connection, oblivious to how much they have in common.

The synergy between Julianne Moore and Finn Wolfhard is the thread that makes this whole story feel real. Moore’s Evelyn and Wolfhard’s Ziggy are a painfully accurate depiction of a mother-son duo who no longer understand each other. They are long past the days when Ziggy came to protests with Evelyn and sang protest songs on a plastic guitar, and neither of them seems to know how to move forward.

Evelyn runs a women’s shelter, and her white-knuckled passion for doing good is palpable. Her voice takes on a near-manic quality when tensions rise, but the rest of the time, she speaks in a soft, stilted voice. Her attempts to connect with others are often fumbling and cringe-worthy. In one memorable scene, she says, “That was a nice conversation,” after making awkward small talk with a young employee. The talk is so awkward, in fact, that the employee thinks Evelyn may be firing her. 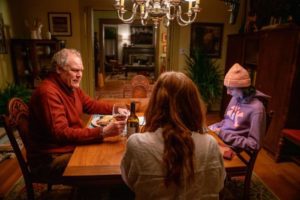 Evelyn’s son, Ziggy, is cut from a similar cloth. Unlike the social-justice minded high schoolers he hangs around, Ziggy’s focus lies on himself and his growing community of fans on a streaming site with mostly non-Western viewers. Ziggy is confident and bright in his livestreams, but in real life he stumbles over his words, boasting about his twenty thousand followers and pretending to understand human rights issues to impress his crush. When asked about using his following for grassroots organizing, Ziggy admits it could be “dope” to switch things up. His efforts to win over the sharp and engaged poet Lila are tough to watch, but his genuine enthusiasm for music is redemptive. Like his mom, Ziggy has passion, but he still seems at a loss for how to effectively channel it.

For much of the movie, I felt stressed out and uncomfortable as I watched Ziggy and Evelyn’s antics. I’d even argue that Eisenberg leans too heavily on this awkwardness at times. Known for his jarring portrayals of anxious and bright men, Eisenberg clearly has a knack for writing similarly self-conscious characters. We do get glimpses of a deeper understanding of human connection, but more periodic reminders of the hearts of our protagonists would’ve made this movie shine.

When You Finish Saving the World is a beautifully shot and thoughtfully crafted piece that hints at good things to come from Eisenberg. I particularly enjoyed the score, composed by Emile Mosseri, which bridges Evelyn’s favored classical music with original songs by Ziggy. With this movie, Eisenberg has put a microscope to the chasm that tends to grow between parents and children in the teenage years. While it didn’t pack many surprises, When You Finish Saving the World stands out as an empathetic, often disquieting look at a mother and son just beginning to understand each other.

When You Finish Saving the World
2022
dir. Jesse Eisenberg
88 min.

Opens Friday, 1/20 in theaters (including locally at the Showcase Cinemas in Dedham, Foxboro, Lowell, and Randolph)