The New York Times’ obituary for Peter Hutton, a filmmaker of the avant-garde and experimental traditions who passed away this past June, describes his filmmaking perspective as an “austerely romantic” one.  Watching his films as part of the Harvard Film Archive’s weekend retrospective, which showcased eight of his films and an excerpt of a 1977 interview with Robert Gardner on the Screening Room series, this interpretation of his work is immediately palpable.  It occurs to me that, given the circumstances in which we now find ourselves – politically, socially, environmentally; however you choose to designate it – maybe it is time to look upon the world as Hutton did in his films: observantly, grounded in an ever-changing environment, and intensely meditative.

Hutton’s films are so rich, so luminescent and full of imagery, that to break them down is a daunting task.  I think part of the reason for this owes itself to the fact that all of Hutton’s films are silent.  In a way, the absence of sound encourages the restless or playful mind to engage with images more contemplatively, or perhaps more rigorously.  This also hints at Hutton’s romanticism: his career emerges as a nostalgic homage to the earliest days of film, before sound could be incorporated with image. Part of this affiliation derives from the exploratory and observational nature of his films’ source material, which parallels the journeys of early filmmakers in search of awe-inducing footage to bring back to European audiences.  The way in which he thought of himself as a filmmaker makes for an easy comparison with early filmmakers, who sought “views more than documents” in Tom Gunning’s words.

Hutton once casually mused: “I often don’t even think of myself as a filmmaker in the classical sense of making films, because they’re really just observations, they’re…notes on looking at things that interest me in the world.” His cinema has also been conceptualized as the moving equivalent to visual sketches – motion sketchbooks. Having worked on ships for many years, he was deeply tied to and inspired by maritime culture, which led him to faraway places and back to the eastern United States, where he settled in the Hudson Valley.

The overwhelming majority of Hutton’s films, in addition to being silent, are also in black and white. Save for the first two parts of his 2007 film, At Sea, and 2000’s Time and Tide – the last of his films to be shown in this retrospective – Hutton maintains this commitment.  The NYT obituary establishes his being “mildly colorblind,” implying that this may, indeed, account for that affinity.  Whichever way you look at it, it is indisputable that Hutton was a master of what Tom Gunning calls “the cinema of silence and black and white,” which “shares some space with sleep and dream.”  In a 2010 lecture recorded at Hampshire College, Hutton prefaces a screening of At Sea by encouraging viewers to relax, saying, “If you go to sleep, it’s okay.” He seemed to approach the viewing of his films with an awareness of cinema’s shared qualities with sleeping and dreaming.

Further evidence connecting Hutton’s films with a dreamlike state was provided by Sunday’s guest, filmmaker Fern Silva. Sharing personal experiences with Hutton, who is beloved by a wide-ranging community of artists, students, and friends alike, Silva recounted an instance wherein the two of them, in trance-like states, began to see imaginary sights in clouds that were being projected from 16mm film in Hutton’s backyard.  Filmmaker Kelly Reichardt – whose name you might recognize from her new film, Certain Women – writes that Hutton “would regularly have friends over and share his unfinished work.” 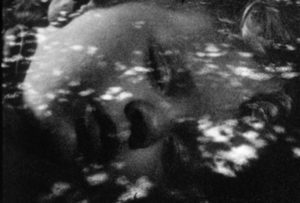 Hutton’s personality, in its openness, creativity, and sentimentality, has aligned with his work in a notable way. His films follow a general format, wherein shots ranging from a few seconds to a few minutes are separated by black leader.  As documentary and experimental filmmaker Alfred Guzzetti noted in his appearance on Thursday, Hutton’s technical abilities, particularly in low-light settings and with black and white reversal stock, revealed an attraction to graininess and texture. As I start to piece together the various complexities of Hutton’s “radical and singular body of work,” as French film magazine Cahiers du Cinéma describes it, I see that film for him may have been just as much about exploring the feeling and texture of a place as mastering an array of physical and environmental conditions, with the camera acting as medium through which both can be expressed and reconciled.  Within these overarching ambitions, Hutton examines and discovers spaces in a highly intimate, patient way.

The events and phenomena which Hutton has depicted, in a geographically sprawling body of work, reveal evolving processes of nature, in all of their motion and unpredictability. Yet his films also reveal the strict patterns by which such processes develop, and by which we come to interact with them.  Take At Sea, the longest of Hutton’s films, which is divided into three parts: the construction, voyage, and deconstruction of a container ship. Its visual gaze is on the same plane as the ship, and Hutton’s incorporation of the horizon, the waves of the sea, and a steady change in light and weather conditions under an ever-expansive sky is mesmerizing. 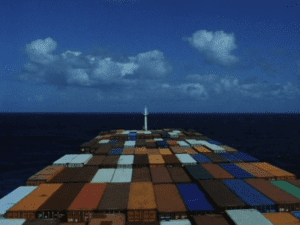 In reality, while At Sea appears to have been made in chronological fashion, Hutton described in his talk at Hampshire College that he actually shot the final part first, which takes place in Bangladesh and features a group of men taking apart the container ship and interacting with the camera in a curious fashion.  After authorities demanded that he stop filming in Bangladesh, he acceded their pleas and traveled back to the US.  Upon the advice of his wife, he went to South Korea, where the ship is seen being constructed in the film’s opening section. Having gleaned such information after seeing the film, it changes in no way; in fact, the process of piecing together a meaningful experience from limitations seems a crucial element of Hutton’s filmmaking process.  His role in structuring the events that led to the final film is clear, but makes no impact on the joyful experience of taking this voyage with him.

Boston Fire was also created under peculiar, and rather humorous, circumstances. Reichardt writes that, after giving matches to a pair of kids on the street, Hutton went home and noticed a great deal of smoke outside.  After taking his Bolex to investigate through the eye of the camera, and after such investigation ended due to a lack of film, he saw the same kids in a police car.  Steve Anker, dean of the School of Film/Video at CalArts, offers another interpretation of the resulting film as “purposely choreographed into a cinematic dance” with its combination of human and organic elements produced under the unique circumstances of a fire. 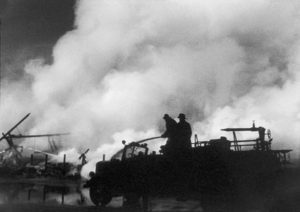 Boston Fire shows how Hutton’s keen eye could make sense of unfolding events, as well as the far-reaching horizons of the sea found in films like At Sea and Time and Tide.  The latter of these two stands yet apart from At Sea by placing the camera’s perspective within the ship, usually from a small circular window to which Hutton returns as a sort of motif.  Images of the Hudson River and New York City in the background also establish the regional character of the work Hutton did closer to his home.  Equally composed of industrial and picturesque shots of the valley surrounding him, the film is illustrative of New York’s multifaceted nature. 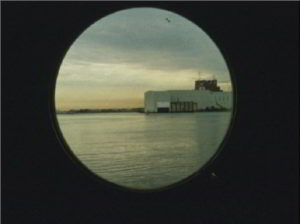 New York, in particular, spurred Hutton’s intense interest and a deep exploration of that place during the 1970s.  The footage collected there was edited over several decades, forming New York Portrait, Chapters I-III.  The Harvard Film Archive’s retrospective showed the first two chapters in this saga.  In Chapter I, the horizon opens up onto blindingly bright skies, clusters of industrial buildings situated at the bottom of the frame. Throughout this chapter Hutton bounces from interior to exterior spaces and back again, showing sights of a microcosmic city: a woman sits at her open window looking down the street, ostensibly being filmed from a building across the way; water flows through a darkened street, likely produced by rainfall; flocks of birds fly into and out of the frame, which points toward a large wispy cloud drifting slowly by as the camera starts to pan slowly as well; wind blows snow into a smooth, cascading entity while Coney Island is pictured in the background.

New York Portrait, Chapter II follows many of the same threads as Chapter I: instead of birds flocking into and out of frame, a blimp floats to and fro.  A group of men seen from above establish the fact that Hutton is likely continuing to film from his window (though it could be a different building); rain floods the streets as city residents laboriously attempt to wade through it or unclog nearby drains, so as to gain some sense of control over their environment; clouds pass over buildings, slowly and rapidly. 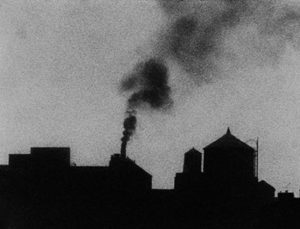 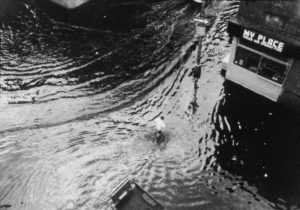 Florence and Study of a River conjured parallels in their investigation of light patterns, particular in terms of how light changes or is reflected upon surfaces of various kinds.  Florence, which was filmed during a period in which Hutton lived in the town of the same name in Western Massachusetts, is an eight minute short piece filmed mostly in an interior space, showing shadows produced by large windows, and light as it falls over various objects and dissipates over time.

Study of a River, filmed on the Hudson River over two years during winter months, offers a similar gaze.  Light glitters and reflects off sheets of ice which break as a ship glides at even pace through the water. In a series of three or four successive shots, the camera examines light’s relationship to water starting with a close-up shot, gradually pulling out to reveal larger portions of the water.  In the first shot, the degree of movement is frenetic and chaotic.  As the shot increases in width, the water reflects more light overall, attaining that characteristic glittering quality that takes place when the sun is out. Hutton also plays with our perception of cinematic representation in Study of a River.  At one point, as the camera moves across the water, the frame is flipped so that stray pieces of ice on the surface float by like clouds.  The effect is contemplative, furthering the meditative quality of cruising along a winter in river, and of merely being witness to the world as Hutton sees it. 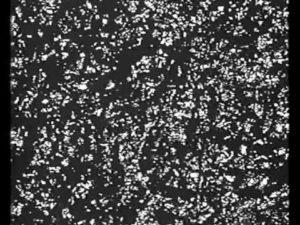 Through this retrospective, and from reading and speaking to others about Hutton, I come to see his departure from this world as deeply saddening. One can only hope that he has encouraged and inspired a new generation of filmmakers, through his many years of teaching and traveling, who will carry with them the spirit and scope of his meticulous approach to the craft of cinema.