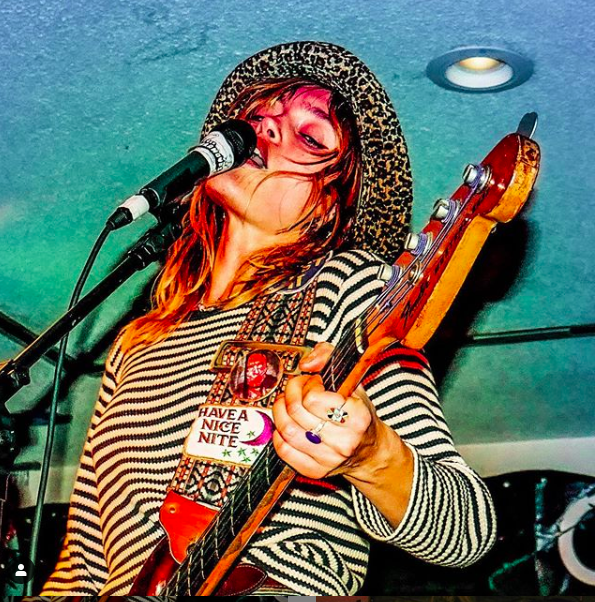 Flanked from behind by giant toothbrushes – an homage to the album cover for their fall 2019 release Carnage Bargain – the four-piece Paranoyds took the stageless stage within the eclectic and short-ceilinged upper lounge at ONCE Somerville Monday night to a sold-out, all-ages crowd – a sizeable feat for a chilly February weekday evening. The Paranoyds opened with the first track off the aforementioned album, “Face First,” a grunged-out surfy punk tune with vocals wrapped in an Exene Cervenka drone (swoon), something emblematic of the west coast and Los Angeles as a whole, which makes sense as that’s where The Paranoyds hail from. With head-banging gusto and the internal winks of bandmates who’ve been friends for ages, Paranoyds followed with the album’s catchy title track and the tongue-in-cheek “Girlfriend Degree,” self-described as “an ode to being a badass woman who’s taking time to make sure she’s doing things for herself.”

Following were another handful of tracks off the 2019 garage-punk album, including “Courtney” with the moniker replaced by called-out names solicited from the crowd. Between-song banter included keyboardist Laila Hashemi announcing an informal poll for their New England friends – clam chowder with or without bacon? (Without, undoubtedly.) And, not gonna lie, I’d probably be first in line to check out singer/bassist Staz Lindes’s vegan chowder house joke-idea, Scam Chowder. Rounding out the half hour were a few fast-jumping older hits, “Maldito” and “Freak Out,” before circling back to Carnage Bargain, ultimately closing with “Bear.”

This string of Paranoyds’ shows was originally billed with Brooklyn’s Surfbort, who unfortunately weren’t able to join the tour (bummer – they would’ve been a rad addition). Instead, Costa Mesa’s Spendtime Palace joined The Paranoyds as co-headliners, playing the closing set on Monday night. With vocals surfing Julian Casablancas-style waves and song stylings straight from Chicago (…the band), their lounge-band vibe felt at home among an enthusiastic bell-bottomed crowd arm-swaying among the tables and chairs in ONCE’s upper room space. Looking mildly sepia-toned in actual real life, Spendtime Palace spilled forth one energetic, poppy, good-time toe-tapper after another. Pretty good for a Monday night.

A Notable Regret: Somerville’s own Leopard Print Taser, dreamy punks after my own heart, were the local support for this Boston/Somerville date and I, very regrettably, missed their set. I was late! I’m sorry! Being on time is hard! (It’s not. Sorry.) I’m assuming they were unapologetically in-your-face and awesome – because they always are. And while I’ve likely missed my chance to see them this winter, their next advertised show’s on April 2 at Hong Kong in Harvard Square – be there (…and on time).