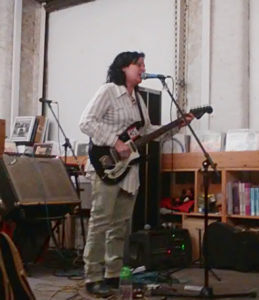 On March 2nd, Damon and Naomi of Galaxie 500 fame will return to Cambridge from a month-long jaunt in Europe with Thalia Zedek. The pair began their tour at Feeding Tube Records in Easthampton, where a virtual going away party was being held. I was greeted at the door by Ted, the proprietor of Feeding Tube, and met a gaggle of friends, fans and cognoscenti. Dozens of Sunburned Hand of the Man posters adorned the walls, while Chili (both vegan and meat) was served as Thalia took to the stage and performed her drowned rock sonnets on a white 60’s era Hagstrom.

She gracefully began her set with new material, and once she got through the third titled “We Will Roll” her essence had completely permeated the record store. Damon and Naomi backed her up on her Leonard Cohen cover, and resumed the night with their set shortly thereafter. Their sullen lullabies soothed the room, and the crowd closed their eyes and gently swayed to the lilting melodies of “Judas and the Macabees”, and a tune dedicated to drives through Western Massachusetts flora, “Lilac Land”. Afterwards the mood was jovial and friendly and many people came and went, and fans who had brought their children gleefully shared this moment with them as a chance to expose the next generation to their heartfelt influences. This Berkshire boy eventually felt out of place and returned westward, but not without a smile after getting a good moment in what was then a sanctuary. 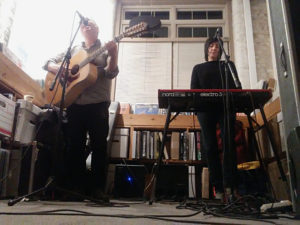 This Post is made possible by our partnership with western, Massachusetts affiliated music blog Digital Wheat Paste for which we at the Hassle are very thankful for.