Don’t you fuckin’ do it. 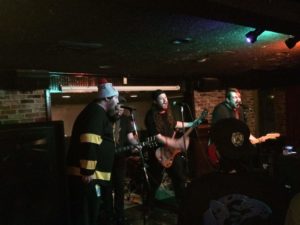 It’s been a long night. I had told my friends that I would go see their band Super Beef (which is the best name a band from Lynn can have) perform, and I’ve already bailed on too many of their other appearances to not attend this one. Why am I on the verge of “freaking out,” you may ask? There’s a few answers to that question.

First of all, I’m a 32 year old at a hardcore show. I suppose that bothers me a bit. It gives me a sense of deja vu. A lot of what I have seen in the past couple hours brings about some odd nostalgia for something I don’t necessarily miss. Nostalgia for a time when I was an awful person who dyed my hair, wore a bunch of chains, and yelled a whole bunch. Back when I was at the peak of my troubles with anxiety and depression and all that other shit that I’m really sick of talking about but hey it kinda makes for good writing. I do not like being reminded of who I was. I was an angry person and I liked to go see angry music played by angry bands.

There were a lot of angry bands playing angry music tonight. They did the things angry bands do. There was a person on stage in a Sin City Cycles hoodie telling everyone to fuck some shit up or form a wall of death or jump the fuck up or something. This person was doing a lot of growling and there was an aggressive energy engulfing the room. That energy has sort of taken over everyone in this venue. It strikes a bit of fear into my psyche.

I’m not saying this energy is a bad thing, it’s just not my thing. At least, not anymore. Anger takes too much effort for me nowadays. And I feel like this aggression may not necessarily flow with the vibe Super Beef is going for. In fact, Super Beef’s “skate punk with lots of Misfits woahs” act has apparently been having a hard time finding gigs that don’t feature five or six hardcore bands going on before them. It makes sense when you consider most members of the band have friends in the hardcore community, and one member is even a hardcore band himself, pulling double duty tonight. Maybe Lynn just has a really big hardcore community. I’m honestly not entirely sure where a straight-up punk band plays anymore. It seems the North Shore is really into more funk and jam-based music. I would say O’Briens fits the bill, but it also fits the hardcore bill: an old, hollowed out restaurant with a large FOR SALE sign in front, one bartender on duty and what looks to be a total of two employees inside. There’s some charm here; the same charm of an old function hall or Elk’s Lodge. In fact, I bet if you tossed aside some of the old tables, added a couple craft beers on tap, and threw a pinball machine in here, people would consider it a pretty hip music venue.

I would say the crowd is mostly made up of hardcore fans too. I would also say I know about 80 percent of them from high school, and the majority thankfully do not recognize me right now. One awkward conversation actually revolved around someone trying to recognize me by my old hair colors.

“No, but I do look like a few people who once had green hair.”

Another conversation occurred with someone in a band named Apollo’s Resurrection. I’m guessing I haven’t seen him in over ten years. It was nice to see how much fun he was having playing music and apparently opening for some pretty big bands. It was also nice to have a conversation with someone from high school that did not revolve around what we’ve done with our lives or how much we make or what kind of income we have. We’re at a live music show talking about music and antics in which one is involved while making music. A nice conversation for sure, but enough to soothe this long-dormant anxiety? Maybe earlier in the night, but right now it’s late and I really want to go home. So I’m doing what I used to do when I would get a little nervous at a show: I focused on the music, and Super Beef makes some really good music. I was a little put off at first when someone in the band described their sound to me as “kinda like NOFX.” We all have our musical preferences and NOFX is not one of mine. I can see where he’s coming from, though. It’s a light hearted type of punk, but I wouldn’t go so far as to call it pop punk. When another member of the band used the term “skate punk,” it really clicked for me. It’s something you’d hear on an old Rodney Mullen VHS tape.

So I’m at the back of the empty O’Brien’s bar and I’m not freaking out, and I’m not wondering if anyone is looking at me, and I swear to god I’m not wondering if everyone knows I’m stoned. I order one last PBR, which is a mistake because it gives me a sour tummy and you can’t mix a sour tummy with anxiety because it makes you think you have diverticulitis or something. But really, doesn’t tonight prove I now have nerves of steel? I talked to people who knew me at my worst and I still managed to have a pretty fun, if not exhausting, night. Super Beef finishes their set and start to pack up, so I go up and tell them “you guys sound nothing like NOFX!” The band looks at each other and says “who said that? That doesn’t make any sense.” The band member guilty of this false comparison murmurs “I couldn’t think of another band.”

I walk outside and it’s very cold and I hope my Uber arrives soon. I say goodbye to anyone not about to pass out and I start making notes in my phone about what the hell I should say about tonight. What was tonight? A high school reunion? A coming of age story? What the hell made tonight so special, so anxiety provoking, so profound in such a weird way?

As Macho Man Randy Savage once put it (when asked what made him so Macho): “one thing in particular, but everything in general.”