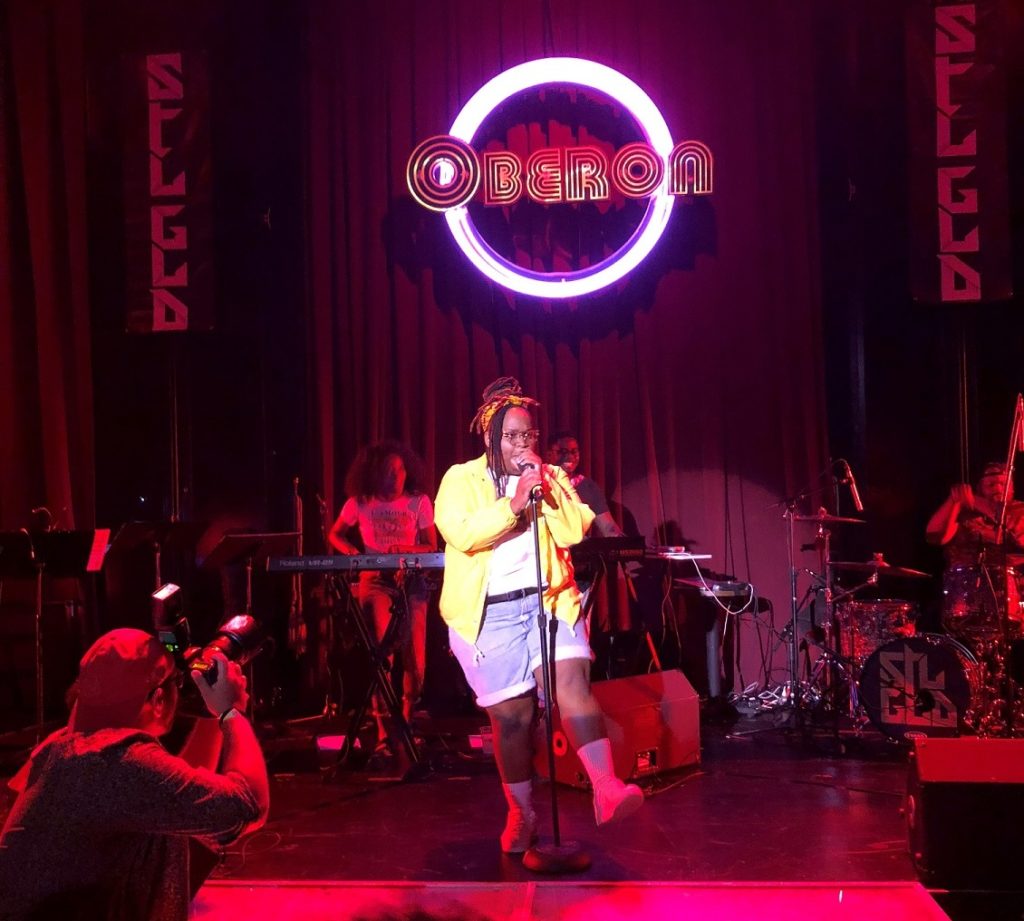 Oompa is a master of ceremonies during her live shows, providing the audience with the full gamut of her experiences, directing the audience from one song to the next, while hitting heavy poetic rhymes. Oompa entered the Oberon stage on August 3rd rocking a bright yellow jacket, stone-washed jean shorts, white-on-whites, and horn-rimmed glasses. Her getup looked almost cartoonish, but she worked it. She stormed the stage with a focused bravado that took command of the crowd instantaneously. Her eyes were full of fire that burned through those glasses and hit you right in the chest, sucking you in like a tractor beam from Star Trek. Bringing joy through tears, Oompa created a party that no one expected.

Oompa’s success as the 2017 Women of the World Poetry Slam champion was apparent from the minute she walked on stage—rapping with laser-like precision and punchy, percussive annunciation— she delivered top-shelf verbal clarity that allowed the audience to feel every word and reflect at every pause. The show was a combination of party-on-the-dance-floor and a deep heart-to-heart conversation. The audience stopped dancing at times, focusing on what she was telling them, like a secret she was sharing with each person individually.

A hip hop purist, Oompa started the show with “Dear Mama”, a nod to the Tupac classic, which also happens to be the most intense and heartbreaking cut off her latest album, November 3rd. She pled her case to the audience with tear-jerking lines like, “Tell me, how do you know how this feels if you got your mama still?” Once she had focused the crowd, she set them free with songs of support mixed with humor and dancing.

Early on in the show, Oompa had the audience do a “warm up” by teleporting them back in time. She broke out treasured throwback 90s dance jams like Juvenile’s “Back That Ass Up” and EU’s “Da Butt.” Within seconds, the room turned into a wedding-level dance party. She even led the crowd in a 90s dance lesson, making sure they were getting their best moves out.

The show was also infused with laughter as she flexed her impressive crowd-work skills. She added humor to make the connections deeper by saying, “People always tell me I look like their Auntie, so I’m gonna be ya’lls Auntie tonight and you’ll be each-other’s cousins.”

During her live set, Ooompa created a sense of inclusion and one-ness with the audience members who came out to support her, knowing that she would support them. Oompa wanted to make sure that everyone who attended her show knew that she had their back. As a self-described “poet, rapper, and educator, who is forever representing the queer, black, orphaned, hood kids”, she addressed everyone in the room at once by saying, “To anyone who’s been told to take up less space…when they deserve more space, this is for you.”

Furthering her support to those who experience discrimination and struggle with identity, she played her song, “Your Girl”, a late-90s-style glossy dance-beat laid over the sadness and frustration of describing a relationship with a woman who won’t acknowledge her sexuality. On this refreshing track, Oompa delivers lyrics that need to be heard in our society, with layered lines like, “I’ve got this girl / She love me / And she don’t like girls.” This is an important topic that Oompa is helping bring to the foreground by humanizing it through telling stories of her real life interactions.

One of the real feel-good moments came when she took a break from the song, “Take Me Back” to lead the crowd in singing the classic verse, “Back in the day / When I was young / I’m not a kid anymore…” from the song, “Back in the Day” by Ahmad. She honorably recreated this track for her album with verses that bled with honesty, tragedy, longing, and disappointment—a workable contrast against the songs’ feel-good beat and sing-a-long melody. Showing even more layers of her humanity during the song, “I Deserve That”, she got the audience into a chant-clap with an endearing smile saying, “If you’re petty and you know it, clap your hands.”

Oompa is almost too good at rapping. You can certainly hear this on November 3rd, but seeing it on stage with a live jazz band behind her was on another level. Her facial expressions were incredibly defined and bold to further clarify her messages to the audience. She told stories to heart-thumping beats and soul-crushing lines. She led us deep into her personal life, which felt honorable and respectful. You couldn’t help but walk away with a family vibe from the proceedings, where at one point toward the end, Oompa reiterated this point, saying humorously, “Don’t look at me, look at your cousins.”

Photo by the author