When it gets to be this time of year, home is often on my mind. Not just the place I go back to when visiting family for the holidays, but also the gratitude I have for my shelter from the cold, Boston winter. And then even beyond the physical, I think about what I’ve done over the past year and how it’s shaped me and gotten me to where I am twelve months later.

It is fitting that the most recent show at the Spaceus Annex gallery is titled Reimagining Home. Curated by Ally Campbell, the exhibition was her attempt to “reimagine and think critically about the place [she] once called home.” However, her approach was not to drum up nostalgia and things that reminded her of where she grew up, but the opposite. “I actually really tried to disassociate my feelings around home when choosing the art. I wanted to incorporate viewpoints on home that were completely different than mine, as an attempt to get a well-rounded and diverse range of experiences.” 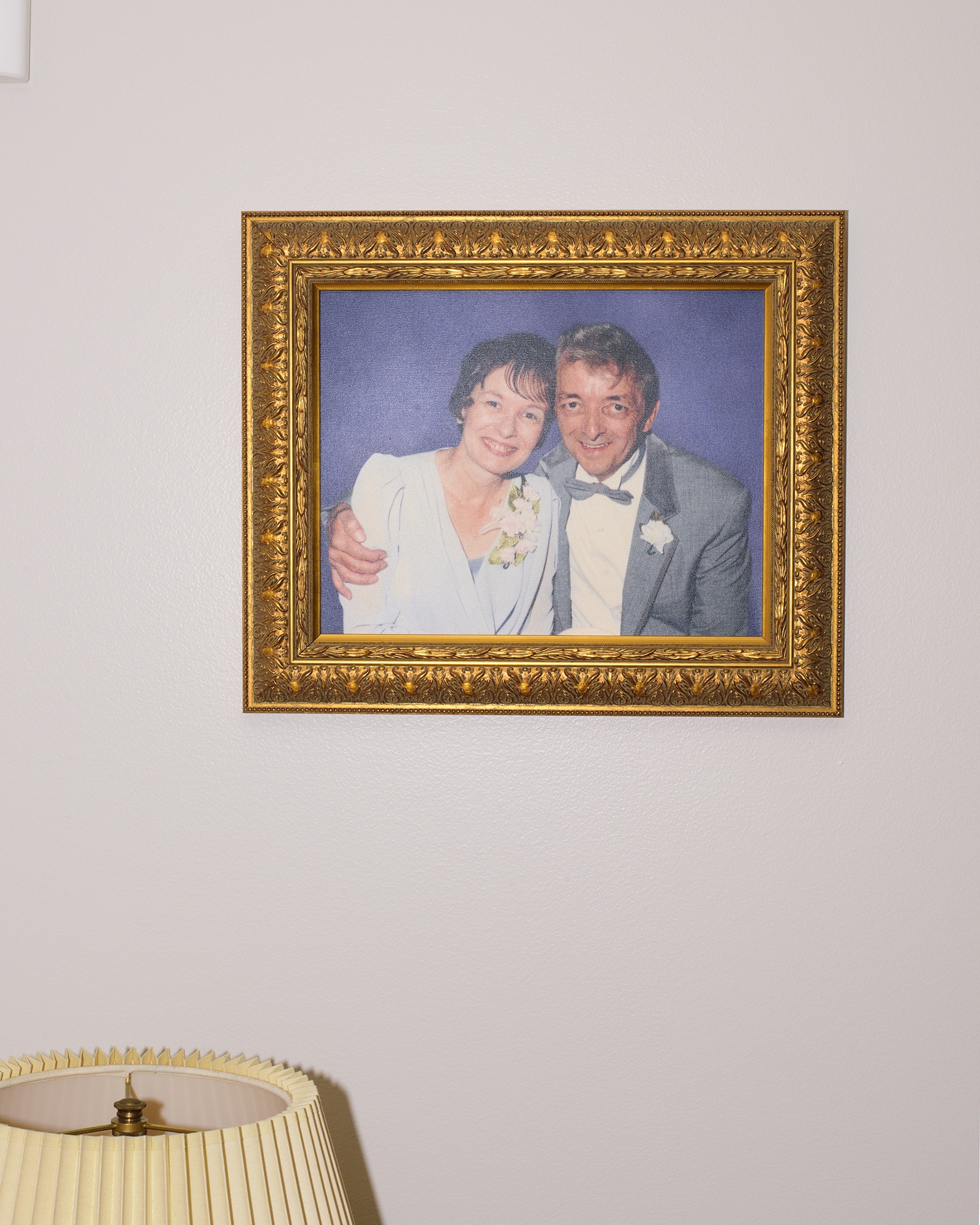 This was accomplished not only by including 23 different artists, but by incorporating a diverse range of media as well, allowing what might otherwise become a worn-out concept to stay fresh between each piece.

It might be helpful to establish what “home” means for Ally. “For me, home is a small town in Massachusetts called Lancaster. I lived here essentially my entire life in the same little blue house at the end of the street. After leaving Lancaster for college in 2013, I felt even more connected to the town than I had when I lived there.  It felt like a part of me continued to live there even after I physically did not.” My personal background is similar, and yet much like Ally, I connected most with the pieces that were the most different from my own experience. 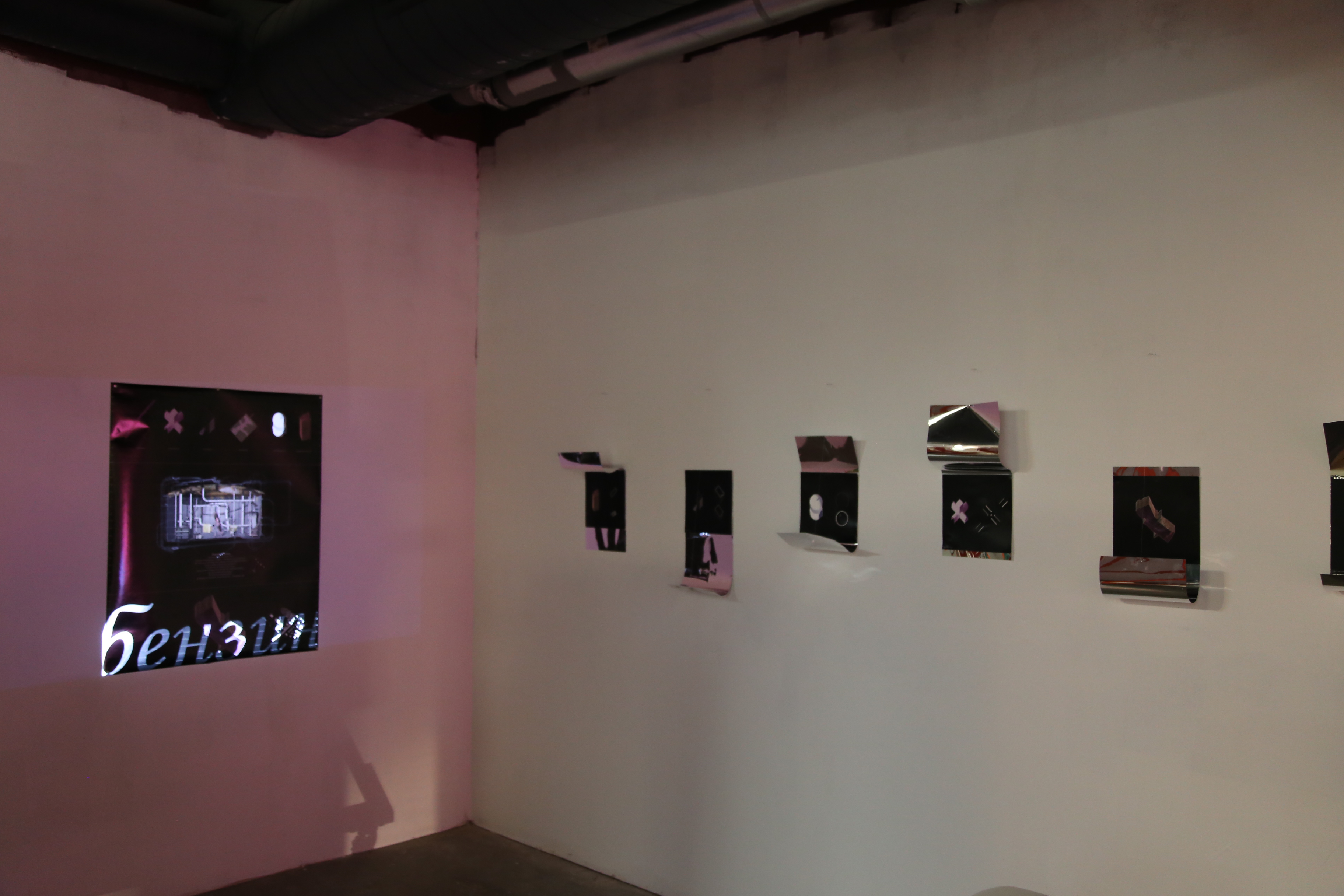 One such work was a piece by Jon Levine, entitled Antonina’s Journey. A flickering projection over a single base image, the rhythm is like a rainstorm. A pulsing white stripe hums across the top of the image, with lightning blasts of a foreign language written underneath. The image itself is a blueprint and displayed in the associated pictures are cross sections of things like a city block and an oil drum. The piece is meant to remark on the idea that home for some is not that house at the end of the street, but a series of places we inhabit. Jon speaks to the idea of the homeless, or refugees and asylum seekers who may not have a place to land, but it’s bigger than that. It’s also the thousands of college students that fill Boston throughout the school year and into the summer, many of them living on their own for the first time, with people they may or may not know, in places they may stay for less than a year. For them, home is where we live in a particular moment.

Jon’s work also stood out to me because it was not as traditional a presentation as a painting or a photograph. When I asked Ally how she decided which media to include, she said she wanted to show a “combination of striking a balance between mediums, the theme of the show, and what logistically could be represented in the space.” The third point was one that seemed obvious after the fact, but I hadn’t thought about it. In working within constraints to convey a theme, the space was a medium unto itself. 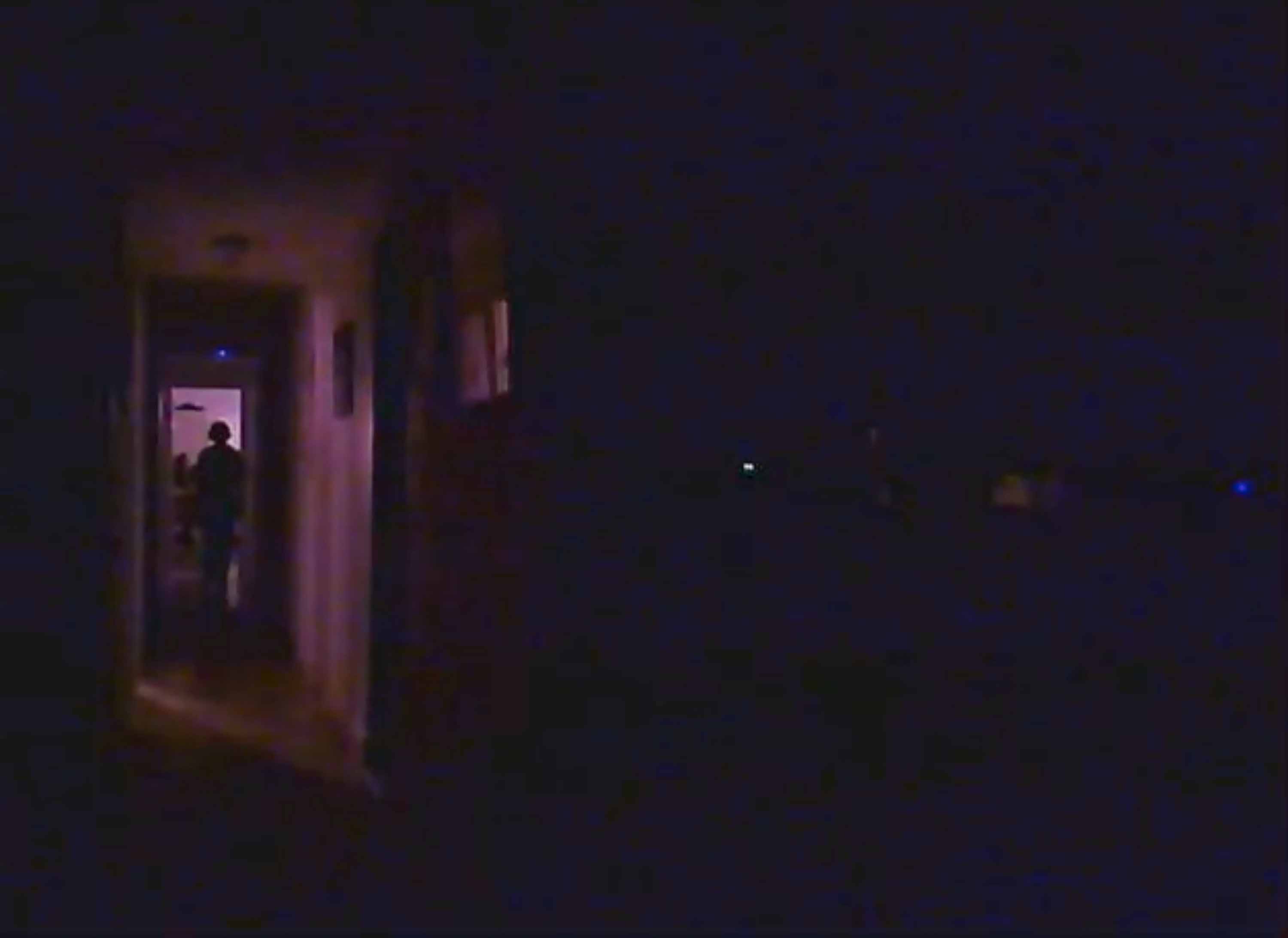 Another artist took the idea of home as a medium in a different direction. In the course of some internet research, artist Mike Bodall discovered that many home security systems (namely video) use a generic password, allowing anyone with an ounce of IT knowhow to watch them like daytime television. It was bizarre to reconcile the idea that so many people view home as a haven, and yet here I was invading that very bubble of privacy. Mike explores this in a series of photos titled (un)secure.

As genuinely interesting as the video stills were, I can’t overstate the importance of consent. At the same time, the subject matter was incredibly mundane. This wasn’t an episode of COPS, or some illicit affair—it was a picture of someone passing through a hallway in a home that could be next door or a million miles away. And yet still I was a voyeur, looking as long as I wanted with no invitation.

But isn’t that any photograph? What’s to stop someone from looking as long as they like, whether the subject knows it or not? In the end you are making the truth of the moment your own, regardless of the subject or even the photographer.

Funny enough, photography is Ally’s primary medium. Ally’s background as a photographer did influence her approach to curating the show, although less from a process standpoint and more from the holistic perspective of an artist. “Art has always been a part of my life since I was young. I always loved drawing, writing stories, and taking photographs with disposable cameras. I was very determined to be able to draw well; I wanted my drawings to be as realistic or as close to life as they could be. When I wasn’t able to draw as accurately as I wanted to, I turned to photography, which at the time felt like the most “truthful” way to represent the world around me. This is a theme that has stuck throughout my photographic work. I am always searching to represent a certain type of truth that is principally unachievable in photography.” 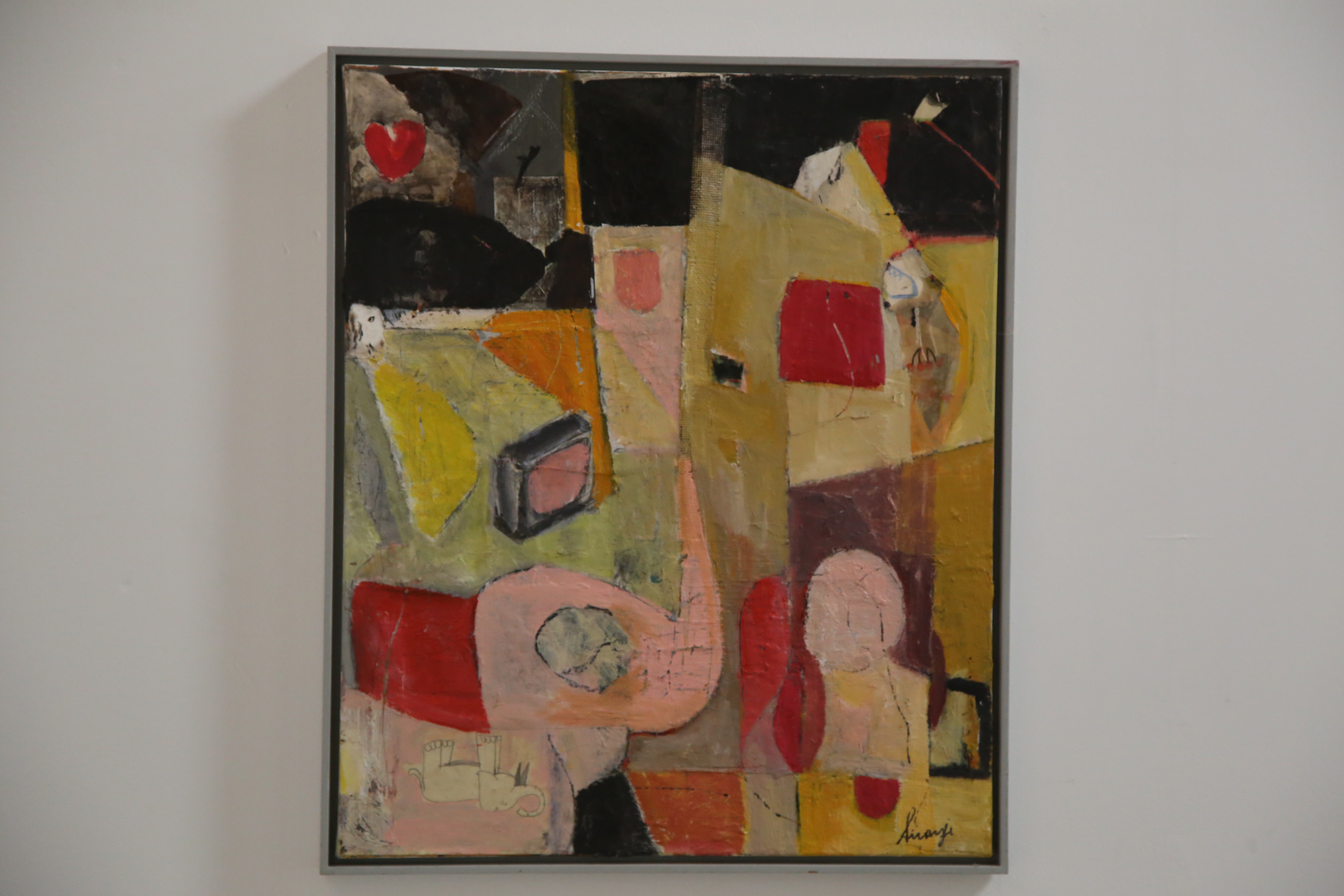 Sirarpi Heghinian-Walzer, Those Were the Days, Photographed by Carlen Deskin

A truth that resonated with me was Sirarpi Heghinian-Walzer’s mixed media work, Those Were the Days. On the surface there is a happy display of vibrant colors, littered with jumbled shapes and images. There’s a heart, a television, a house, and an upside-down elephant, all blended into the background, almost in a “Where’s Waldo” style. The theme of childhood is readily apparent. Heghinian-Walzer states that the piece is in some ways about the bitter sweetness of the empty nest. I don’t have children of my own, but I can certainly relate to growing up, and to leaving behind the comforts of childhood in search of greater things. 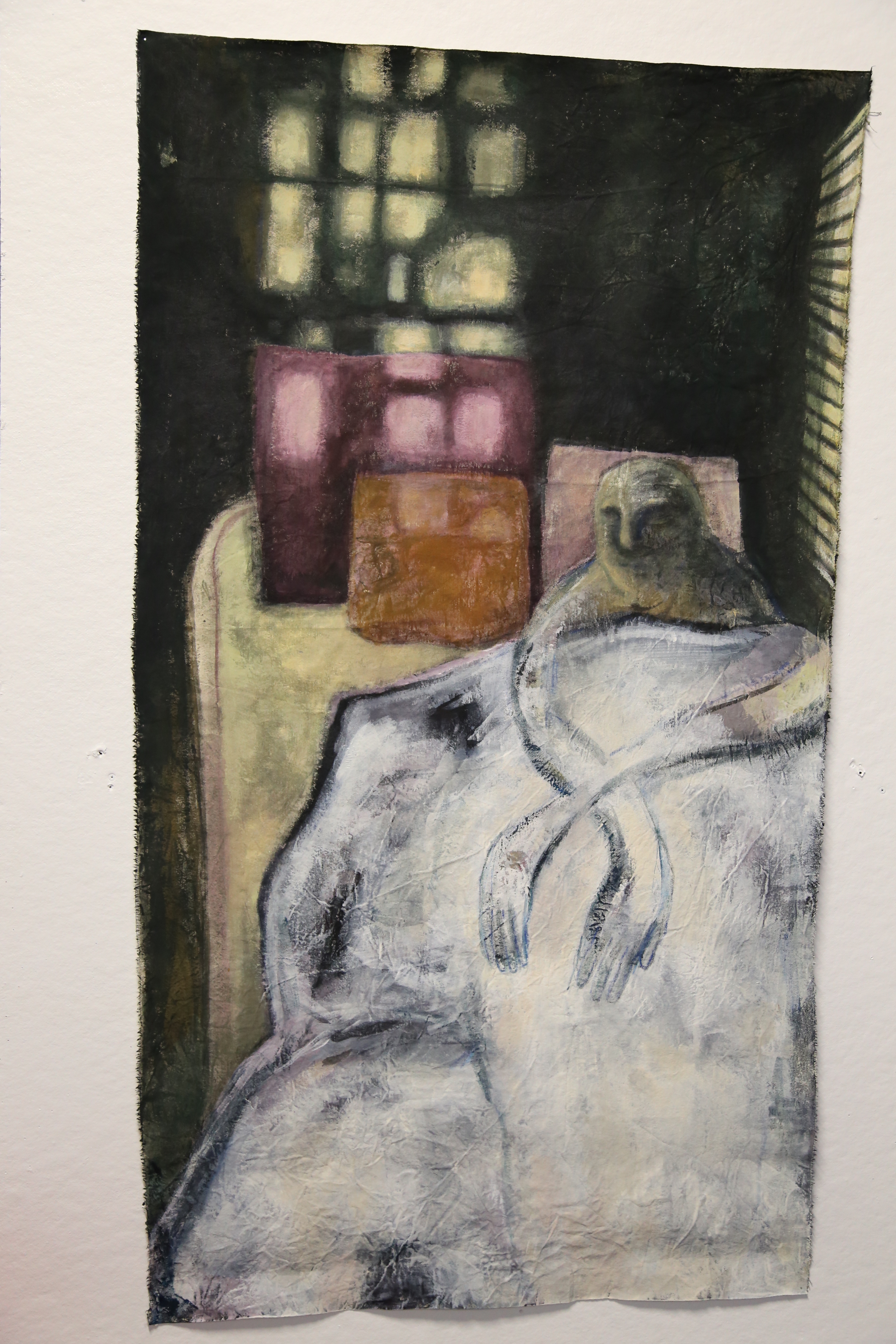 “I believe that any exhibition is not just an opportunity to showcase artists’ work, but to invite a conversation around the art, the artists, and the overall theme of the show,” says Ally. I left this exhibition thinking about home in a way I hadn’t before. Not just the places I live, but the people as well. As an organization, Spaceus is working to transform the ordinary retail sites around us into more creative spaces, so that people like Ally can express their vision, and hopefully bring us all closer together in the places we all inhabit. I look forward to more great work from both of them!

Reimagining Home was on view November 16th to 25th at the Spaceus Annex gallery. More information regarding Spaceus can be found at https://spaceus.co/

This Week In Experimental: Volume 63

Hello Experimenters!   I’ll keep this short as the relocation chaos is at the front of my mind. Some very cool news:…