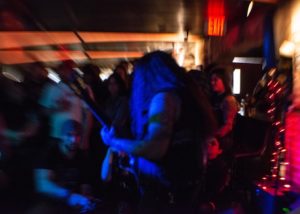 I don’t know much about stoner rock/metal. I like some Uncle Acid and Kyuss here and there, but some other bands like High on Fire are a little too hardcore and spooky for me. I was excited to see how I felt about Beverly’s newest metal group, Mother Iron Horse, who had their debut show last Tuesday, May 21, at Opus Underground.

The excitement also stemmed from having a friend in the band. I know Marco, the guitarist, from high school. We both dropped out of said high school and received our GEDs around the same time. We then ended up at the same bar–The Lucky Dog–damn near twenty years later.

Speak of the devil, about 40 percent of the Lucky Dog staff and a large portion of the regulars littered the Opus basement that night. The North Shore music scene isn’t very big, so it’s nice to see folks from nearby bars and venues support their local acts. In fact, the very first person I recognized when I arrived was a bartender, Scotty, standing at the bar, telling me he feels under-dressed for the night. Leather jackets and denim Doom vests were the uniform of choice. I wore a Hawaiian shirt with Ween tee underneath because I wanted to look like an out-of-place asshole. I think it worked. 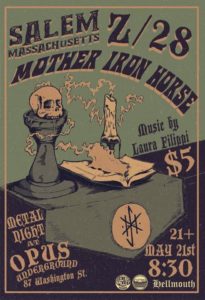 Me and my bartender friend took some time to appreciate the Mother Iron Horse merch and flyers. A man who I pegged as a body double for Jesse Hughes from Eagles of Death Metal approached us and started a conversation about t-shirts, hippies, designing merchandise, and stoner music in general. This guy was apparently the lead singer of Mother Iron Horse and created all their merch and music videos.

I honestly believe one of the best things about this band is their whole aesthetic; they’re going for that purple haz-y look, like something out of a ‘70s horror movie. And they’re nailing it. It’s always refreshing to see a band know exactly what they’re going for. 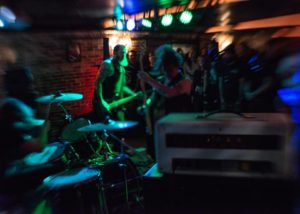 The same can be said for their music. All members of the band seemed to be in their own zone, with very little interaction with each other or the crowd. It was no-frills, no-nonsense metal. These guys know what they want to be, and they’re doing it right. While a lot the vocals are a bit more on the scream-y hardcore side of things, the instrumentals hit that more melodic and pleasantly repetitive note that makes my brain float away. The non-screamy parts of the vocals were really interesting to me. They gave off that sort of slow, droning effect you get from a lot Electric Wizard’s work. 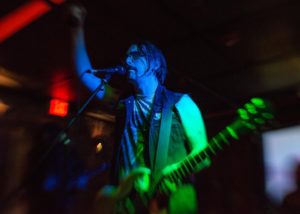 Still, I was a bit distracted. I could have sworn I knew the lead singer/merch man I spoke to earlier from somewhere else. After the show, I shook Marco’s hand and asked who the singer was. Apparently I also knew this guy, Adam, from that same dreaded high school. I wobbled over to him with shoulders stiff from being squeezed into a crowd and my stomach turning from cheap beer.

“Hey, you’re Adam, right? I didn’t recognize you, I think we went to high school toge–”

“Yeah, we would smoke weed together!”

“YES! We would smoke weed and watch, oh my god,” he gets the attention of the woman (friend? girlfriend? fiance?) next to him, “I saw Super Troopers for the first time at this guy’s house! High!” The woman nods as if to say “Oh, that’s neat?”

We hugged, a nice juxtaposition to the ear ringing mayhem his vocals just thrust upon the audience.

“I am so happy to see you guys doing” –I gesture to the stacked amps–“this!” We share one more embrace and have the “friend me on Facebook! We need to catch up!” conversation.

After a quick trip to Lucky Dog for after-show drinks, I went outside and called my Lyft. The minute I hit “confirm” for the ride, my phone died. And I don’t mean the battery ran out. The thing got stuck in a literal reboot cycle, turning off and on and off and on and off and on. My driver was also 12 minutes away, giving me plenty of time to stand out in the dark to just wait and hope for arrival. Normally this would send me into a panic fit, but I was in such a good mood from my whole experience of the night that I had that “eh, I’ll figure it out” feeling.

Good music, seeing old friends succeeding at doing their own weird thing, and reminiscing about Super Troopers. What more could you ask for from a basement metal show?

(Yes, the Lyft showed up, and I had to get a new phone with a raging hangover the next day).

Mother Iron Horse’s next show is Friday, June 7, at the ONCE Ballroom in Somerville.

*Note: I was absent for the majority of the first band, Z28’s set, and I didnt want to write anything about it without knowing much about them. I will say I really liked what I heard. The vocals in particular had a clarity and loudness I wasn’t expecting. I’m definitely planning on listening to more of them in the future.