After gathering the courage to introduce myself to Valerie Imparato, the artist behind all of the artwork in the solo show Just Because We’re Magic (on view January 12-20th at the Spaceus Annex in East Cambridge), she greeted me with a big, gracious smile and a fabulous wrap atop her head.

Now that I was feeling at ease, while we were otherwise enclosed by extremely talkative guests, Imparato leaned in closer so that she could hear me ask what her favorite piece was.

“I can show it to you!” She announced, and beelined to “Running. One of the reasons it’s my favorite piece is because it features a new mixed media I’ve been trying. It’s collage and painting. It’s also an abstract take of the cotton field. It’s really reminiscent for me, the beauty of plantations.”

“If you actually look at plantations, especially in Savannah, Georgia, and the South, they are some of the most beautiful places in this country,“ Imparato said. “But the horrors that were going on there, during slavery, and for Black people, Black women, in particular, are so unparalleled in this country’s history. So in this piece, you see these two girls running through the field. And you don’t know if their running is a part of their childhood, or away from their childhood being stolen from them through slavery. So I really like the ambiguity of this piece and what it represents, which is the subjective beauty, at the time, of slavery. But [slavery] was destructive. It was not a beautiful experience for people of color, and we don’t know what the girls are experiencing.”

After hugs that felt like an exchange of gratitude, Imparato, who’s also a Harvard and NYU-educated licensed attorney, blended into the mix of her guests, and I continued to vibe with her artwork. 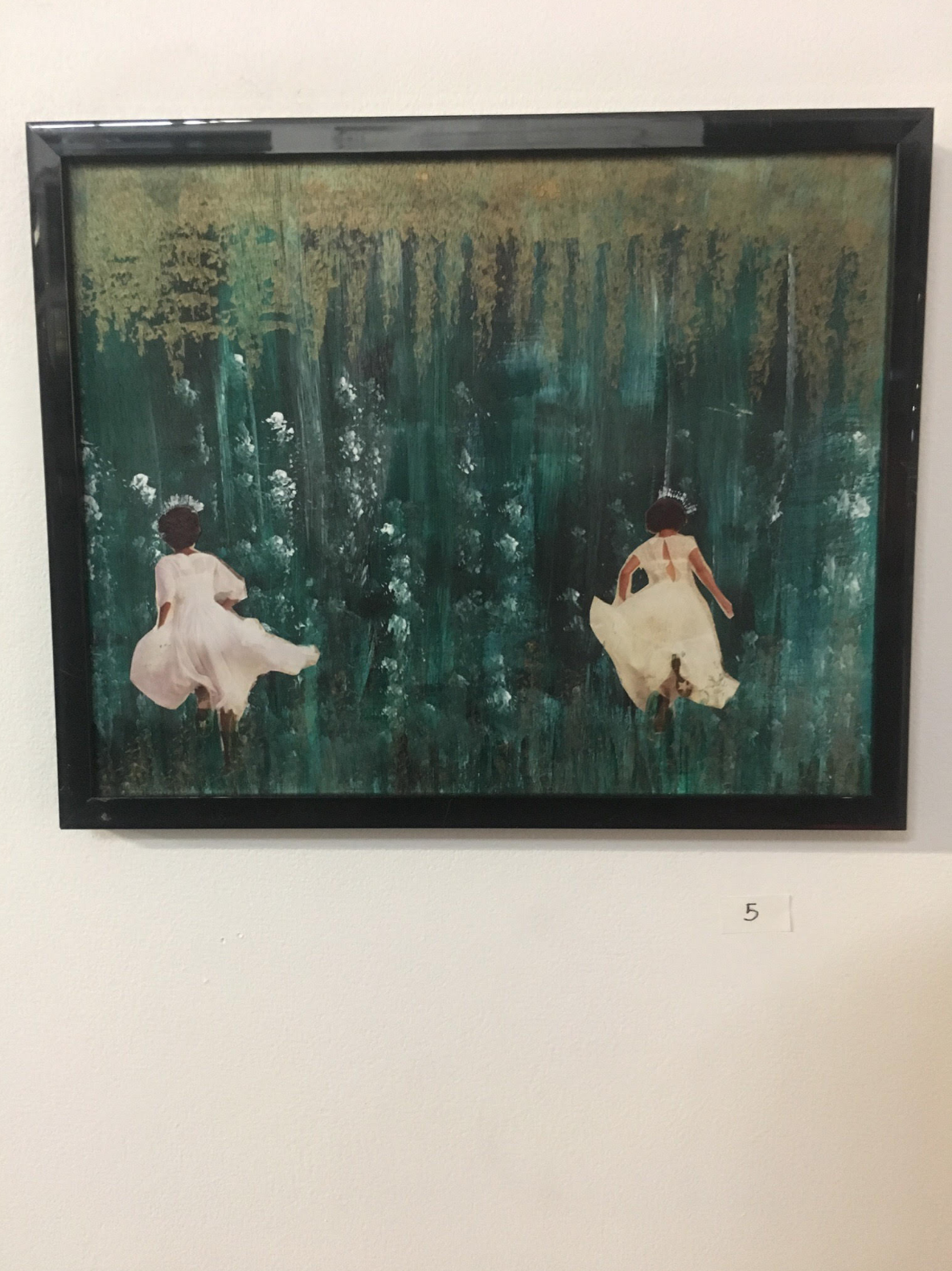 Days before, I had read on its event page, a description of the show’s purpose: “[Just Because We’re Magic] is about the classification, exotification, fetishizing, and scrutiny, of the female black body. It is fundamentally about what it means to be a black woman in America, and all of the beauty, struggle, and innovation that entails. Black women are constantly criticized and assessed by white society, and as a consequence, by themselves. The exhibition’s surrealist, and sometimes abstract, fine art, turns the idea of blackness on its head while preserving ‘black girl magic.’ The exhibition invites the viewer to rethink her definition of blackness, color, womanhood, magic, and most importantly, beauty. The artist invites [you] to search for the magic and struggle in each piece, and to remember that both demons and gods are sacrificed; only humanity is spared.”

Imparato’s title was also inspired by a line actor and activist Jesse Williams said at the 2016 BET Awards. While accepting his Humanitarian honor, he said, “Just because we’re magic, does not mean we’re not real.”

What added to the experience of viewing Imparato’s work was that the reclamation of the black woman’s body, and all the stories and magic she carries, wasn’t just in effect at the Spaceus Annex. The movement was alive and disparate, as earlier that day, the City Girls featuring Cardi B’s “Twerk” had dropped online.

Later, within 24 hours, the gratuitous (and that’s not hyperbole!) video had reinvigorated the conversation about the depiction of Black women in the media and pop culture. Some sites, like The Root, celebrated the unadulterated visual, as City Girl Yung Miami and Cardi B rapped and booty-popped among their retinue of the world’s greatest twerkers.

The visual also had its detractors.

To that, their question of what was new or empowering about “Twerk” was fair enough. Likely layered with justified worry, this was mainly expressed by Black women who wondered if the legend of the hypersexualization of Black women had reached its apex in our Instagram age. Or, depending on who you inquired, (lazily) piggybacked the micromanaging of what Black women can and (seemingly) “cannot” do. Some critics were just hellbent on respectability politics, such as conservative Stephanie Hammill, and tried to weaponize “Twerk” against Black women; a veiled attempted at the erasure of Black women agency. (The video, however, rose above and currently has 68 million views. Most YouTube viewers enjoyed and supported the women partying).

Disrupting the policing and uplifting the peace of mind of Black women were battlefields Imparato took on with zest and a color palette that boasted bright mattes and vibrancy in Just Because We’re Magic.

It’s been nearly three months since I attended the exhibition’s closing reception and I can still say it was cathartic. I’m also thankful I was able to connect with it before watching “Twerk” the next day. Viewing Just Because We’re Magic before, made room for an abundance of nuance when I did, and the reminder was clearer than ever: Black women are okay to be free and freed.

Let her twerk on Miami Beach.

Let her keep to her herself while listening to a true crime podcast on that same beach.

(Read: We are not monolithic!)

Let her be the muse of artists such as Imparato who reflect Black women as the queens of their universe. 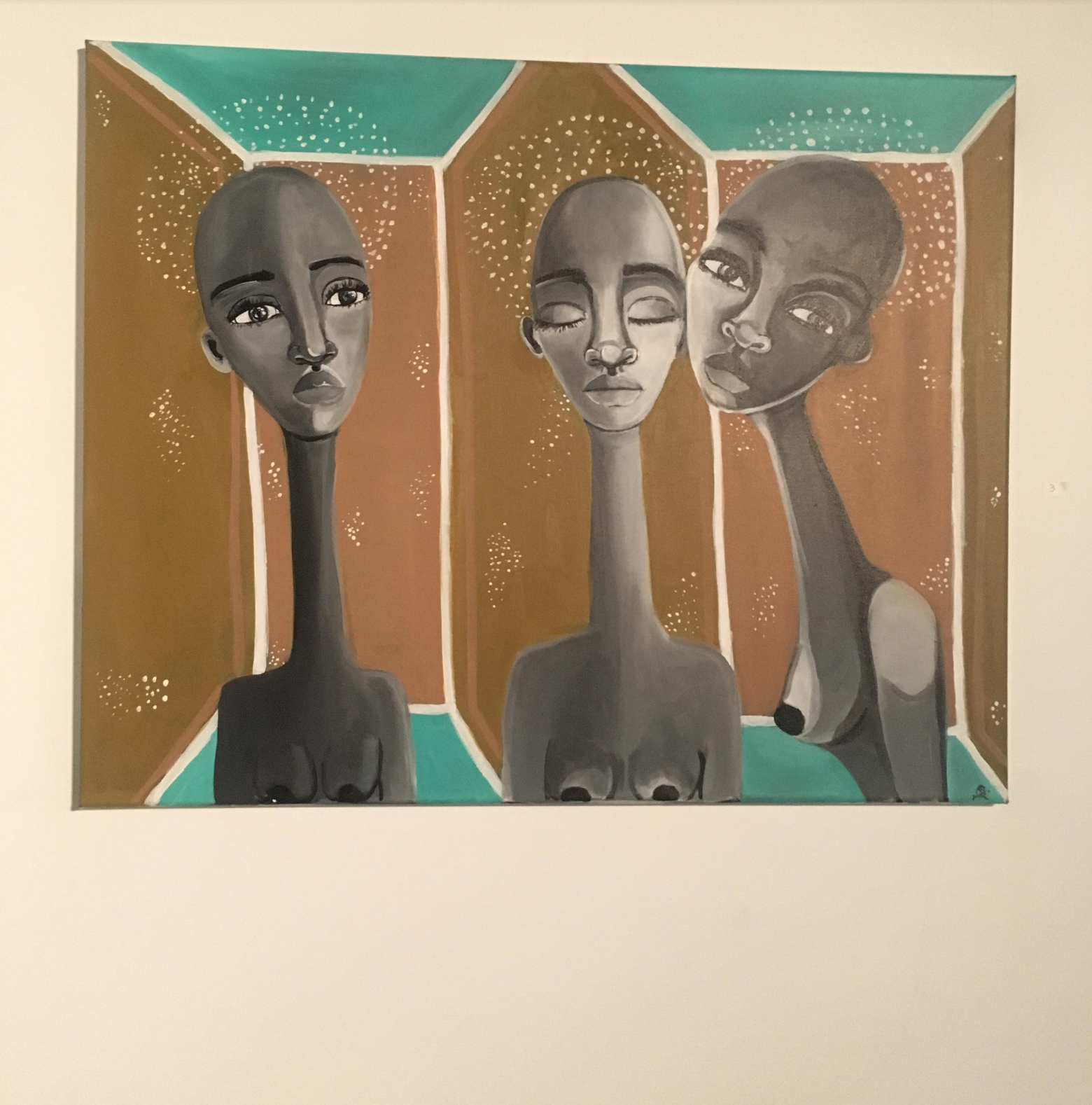 Her figures, with bodies often drawn with shapes that are realistically curvy with natural rounds and folds, or the busts of women with expressive eyes and big lashes, and sometimes distinctive giraffe necks (The Three Muses), were placed in euphoric spaces with geometric shapes and clouds in the background. African and Caribbean influences contributed to the majestic nature of Imparato’s work, and her graceful lines reminded me of the African figurines I saw in gift shops and specialty stores as a little girl. That memory was most evoked by the everyday angel women in Ultralight Beam. 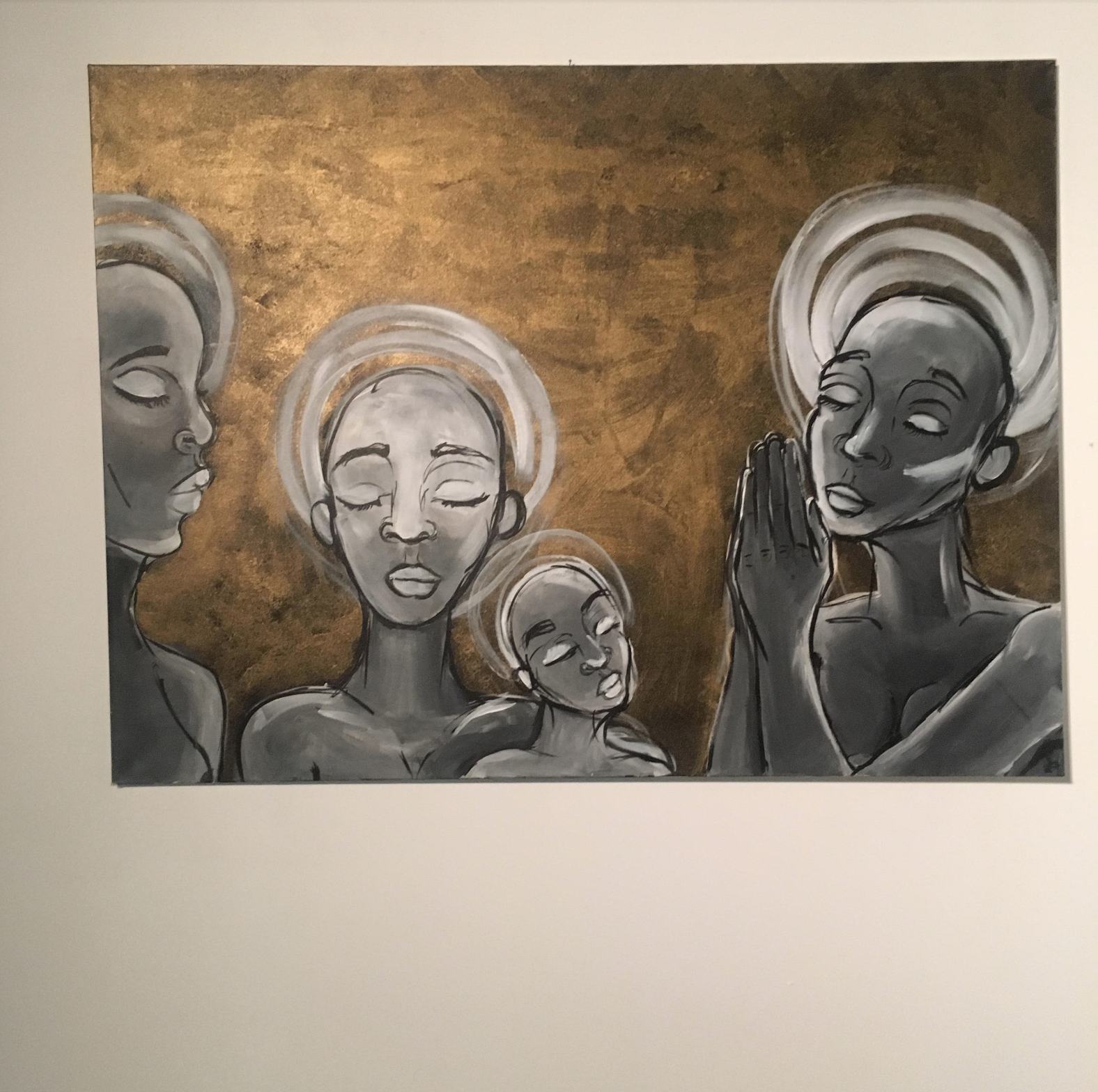 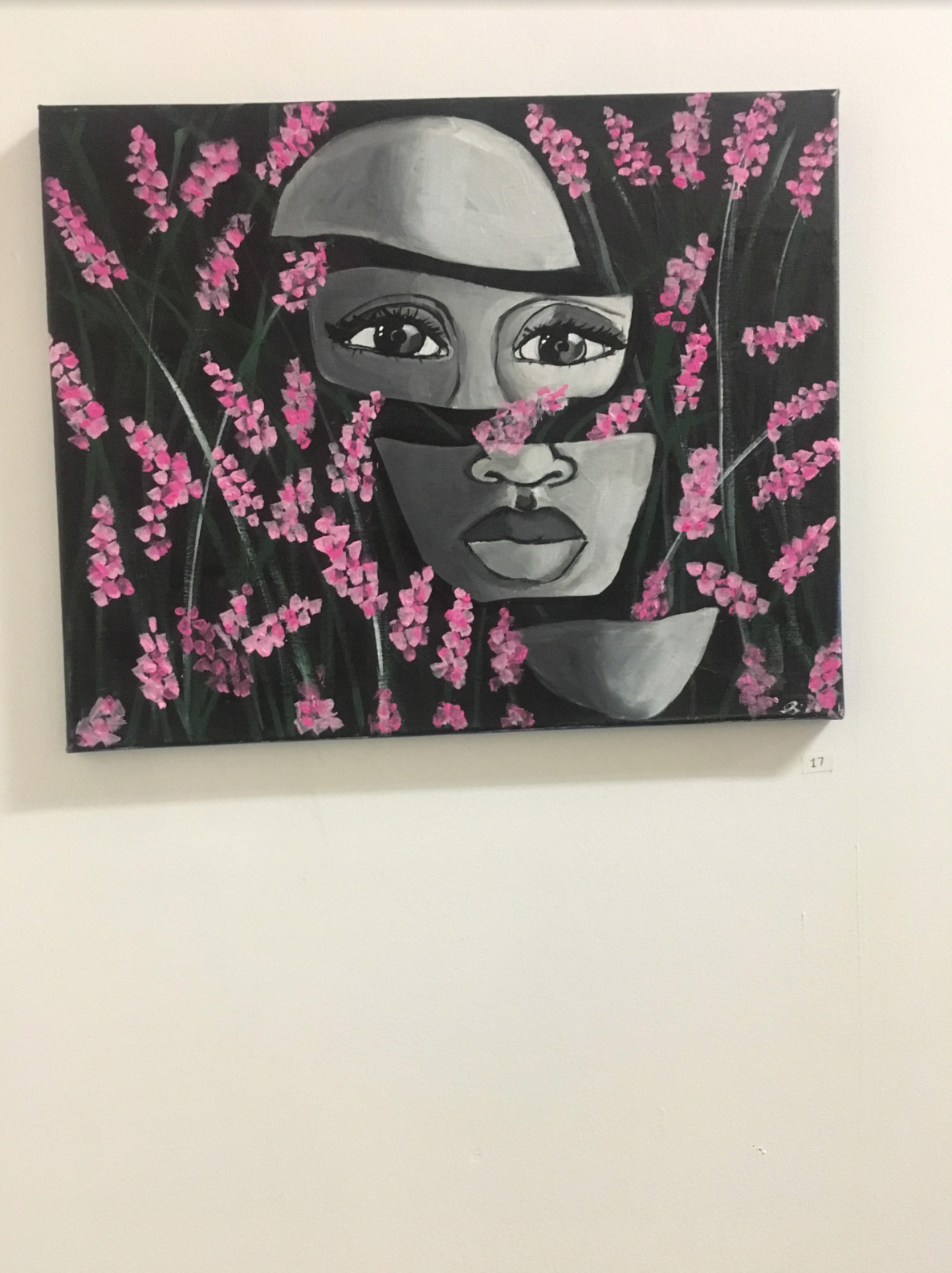 Lavender was my favorite. The painting was of a woman’s face sliced in four parts: her forehead, set of eyes, the tip of her nose and mouth, and chin separated. It sounds macabre, but in person was not. You had your choice of deciding whether she was coming together or amicably coming apart. 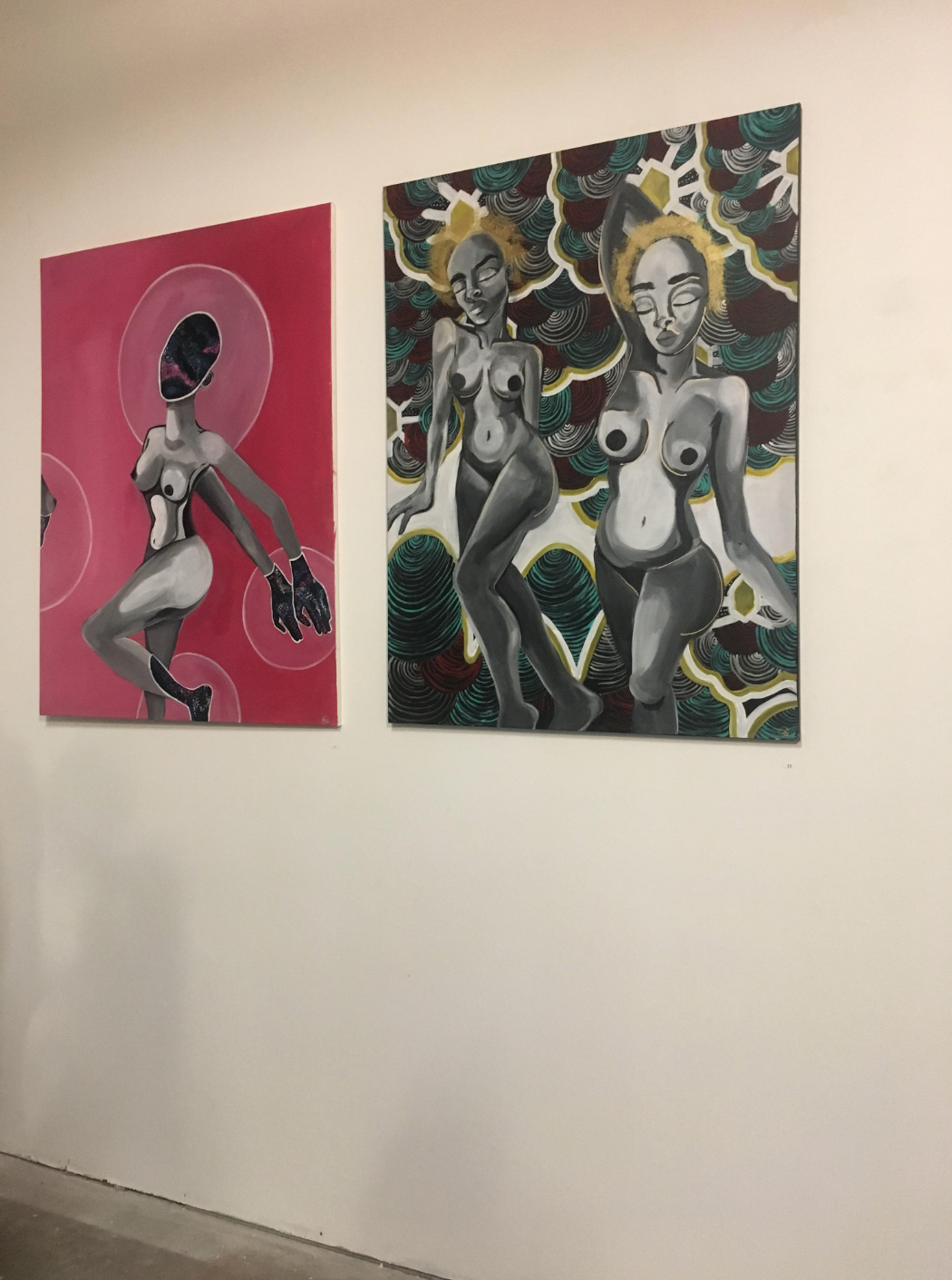 Galaxies of Pink and Homage to a Black Woman

The acrylic on canvas Homage to a Black Woman captured two nude women that appeared to have been grooving. Their eyes are closed, the forest green, burgundy, and black and white discs surrounding them are the decorations, and self-love must have been on the song playing on the radio.

Additional gifts of the Just Because We’re Magic closing reception were the mini pop-up shop of Print Ain’t Dead, where books by writers of color are the rule, and performances by spoken word artists, poets, and musicians. One poet/musician had brought along her Afro-puffed baby girl, and her presence warmed hearts and amplified the stories and messages that were already being shared throughout the night.

All Black women, via a microphone, or just the sheer power of their voices, as two spoken word artists mobilized the gallery by strolling through any open spaces in-between the guests, expounded on how they were tired of the Caucasian gaze-induced tropes, maltreatment, and injustice in the media and the law, and sometimes judgment from their brothers and sisters on a larger community-sense. Moreso in their work, they also declared spiritual, intellectual, feminist and womanist, and community uprisings.

From Imparato to the final word of the stanza spoken, Just Because We’re Magic, vividly reaffirmed the unique, psychological wherewithal (the “magic”) of surviving and creating in a discriminatory world, and the beautifully human complexities and joy of what it is to be a Black woman.

Just Because We’re Magic was on view at the Spaceus Annex from January 12th-20th. More information on Spaceus can be found on their Instagram @spaceus.co