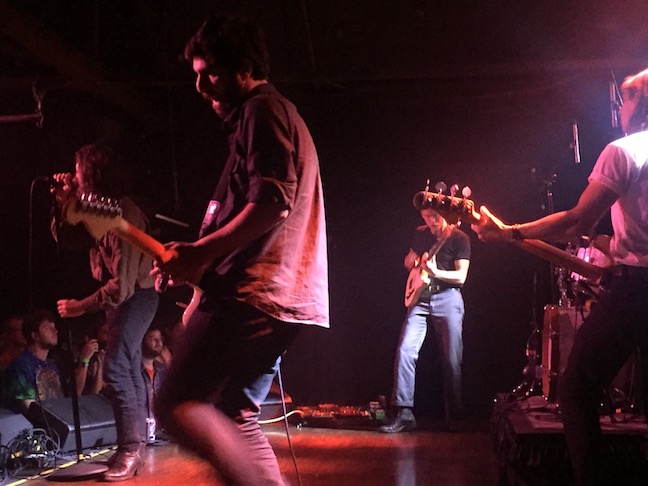 Bambara are buddies of a lot of my favorite bands (most notably A Place To Bury Strangers) but I had never seen them live before. UNTIL NOW! They remind me a lot of an American version of Iceage who I just saw and reviewed a few months ago. They are probably a bit punkier than Iceage are or at least punkier than Iceage’s recent stuff. They have this industrial goth post-punk sound that does have a swagger to it like Nick Cave when he was in the Birthday Party.

This just jumped into my head; next time they are in town we should invite Bambara out to the restaurant in Cambridge that shares their name.

Each member came out one by one with the drummer first giving us a beat. The rest followed including one guitarist who was only wearing underpants. Their music combines 70’s British punk with 80’s & 90’s influences (bands like Big Black, Jesus Lizard and Scratch Acid) The singer introduced the next song as being a love song about his fiancée but you wouldn’t have known it because of how brutal it sounded.

By the way whenever I mention a band as being brutal I mean it as a compliment. For one of their last songs Idles invited a few audience members up on stage to play their instruments and jam. To sum it all up, Idles are a band that a beer swilling British guy named Jeremy Crawford, that goes by the nickname Hooligan who is a huge West Ham fan, would love.

Here are videos of both band courtesy of Front Row Poster