Dorchester Art Project’s new exhibition, Face Value: Makeup, Art & Identity, isn’t a show purely about makeup– that is, it’s not about makeup’s surface-value connotations; makeup techniques or products; beauty hacks; the latest beauty trends; or step-by-step instructions on how to look conventionally “presentable.” Face Value is an intensive and redeeming art exhibition about aesthetic empowerment and owning one’s identity. Through artworks in a range of media, makeup is considered as a vehicle of expression for gender, sexual, cultural, and political identity, and as a means of delving into the philosophies behind self-presentation, femininity, and queerness. Face Value excels as an exhibition because it tackles realities that are harder to talk about via the often-misunderstood concept of makeup.

In addition to planning and curating this show for more than a year, Face Value’s curator Emily Bass is a member of the DAP gallery committee and has been Boston Hassle’s Arts Editor since May 2018. Face Value began with a call for art and culminated with 17 predominantly Boston-based artists: most are people of color, queer-identifying, and on the younger side, with the exception of a few seasoned artists. Each piece initiates a different but interrelated dialogue, resulting in an exhibition with many different threads to explore and digest. Many artists take the approach of first-person narrative, such as sharing their perspectives on being misgendered or addressing the pressures of gender categorization and conformity. In addition to creating a space for queer artists, Face Value also strives to uplift people of feminine expression (regardless of one’s gender or sexual orientation). Curator Emily feels that femmes experience the tendency to be “flattened” and that stereotypes surrounding makeup contribute to this impression. It’s not often that feminine expression is explored in-depth or beyond its traditional, circa-1950s meaning, thus we see its perpetual (mis)interpretation as the embodiment of frivolous vanity.

Tracy Huerta’s three interrelated artworks contribute a much-needed dialogue around queerness, femininity, race, and political activism, using makeup both as material and “weapon.” The non-binary Latinx artist imbues their work with a sense of detachment from the self, exploring their identity as seen from the perspective of others in dissimilar (perhaps mainstream or privileged) circumstances. The two framed works take a subtractive approach, obscuring portions of existing text to reveal “new” narratives that, although already-embedded, we find systematically marginalized. Blush creates a poetic “call-to-empathy” from an article about the US-Mexico border crisis, while Biologically Nonbinary simulates the perception of gender according to the government and cisgender society– assigned-sex only– as “attempts to render transgender identities invisible,” as the artist states. Huerta’s alluring installation, Between Desire and Desirability, features lipstick casts of the artist’s own face and fingers. These objects are intended to be interactive, especially the “touchable and kissable” lip casts: “viewers are invited to interact gently with these replicas of a NBQPOC body and be anointed by a sheen of balm,” reads Huerta’s wall label. While the piece in part attempts to spread empathy, intimacy, and love for queer identities and appearances, the frozen mouths communicate the silence endured by these voices in less-welcoming atmospheres. 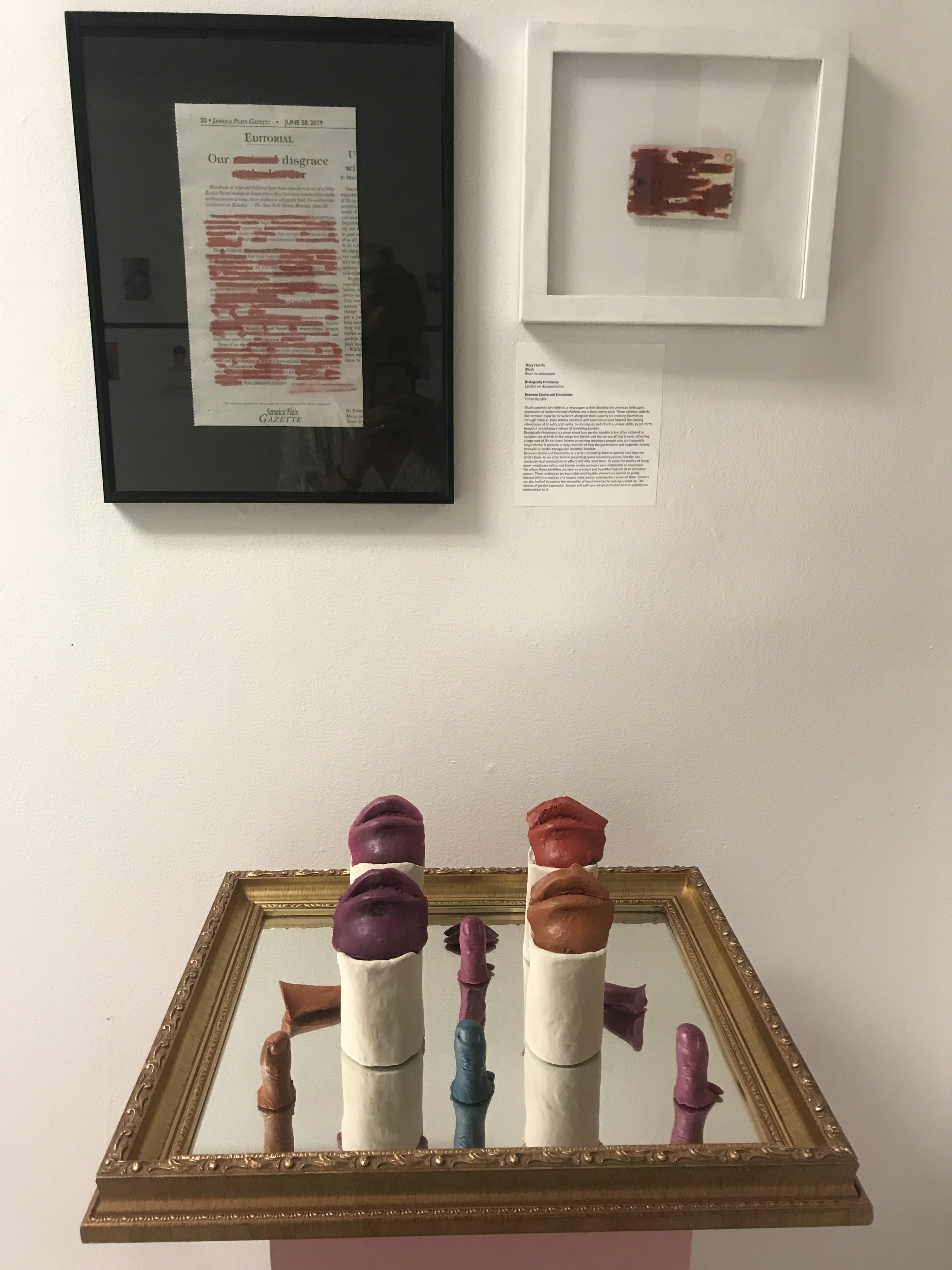 I was extremely pleased to find the exhibition’s binder of additional readings (both seminal and contemporary), my favorite being excerpts from Fabulous: The Rise of the Beautiful Eccentric by Madison Moore:

When we say fabulousness is simply men in drag we’re really promoting the essentialist idea that femininity belongs to women and masculinity belongs to men, case closed. This is the source of much transphobic violence, to be sure, but it also obscures the glorious powers of abstraction, eccentricity, fantasy, futurism, and even the wild nature of a fabulous aesthetic… All forms of drag practiced by all genders and non-binary people are equally potent critiques of gender.

Indeed, many artists in Face Value turn the body into a performative spectacle and a vessel of power. They show us “how to take up space in a world tells you you don’t deserve to be there,” as Emily states. Some artworks, like Natasha Zinos’ drawing, Bless You, communicate one’s struggle with disability and chronic illness, whilst offering a perspective so integral to the variety and depth of Face Value. In fact, Bless You is not about makeup at all, but rather coming to terms with one’s relationship to pain and their physically and/or mentally-inhibiting body, like when their outward-presentation goes against the self they desire to express and celebrate. Zinos’ drawing takes a graphic-art approach, stylistically rendering the figure’s facial features expelled from the body and scrambled in a glob of “snot.” Thus, the figure loses its ability to see itself as a body, communicating a radical sense of disassociation and liberation. The text reads “bless you” as if from a stance of rightful self-worship and self-care.

Natasha Zinos with Bless You, marker on paper.

The research element behind Face Value shines in the exhibition’s timeline, which charts the cultural history of makeup over the last 100 years up to the present day. Contemporary highlights include a shout-out to the dramatic, drag-inspired makeup looks that online influencers are appreciating and spreading on social media today, embracing them as everyday looks—although these “influencers” fail to give credit where credit is due, I feel. Emily notes that anthropologists and historians typically analyze cultures of the past from a distance instead of paying attention to the cultural phenomena of our time; seeing that much of queer history is undocumented, how can we document and historicize it right now as it happens? 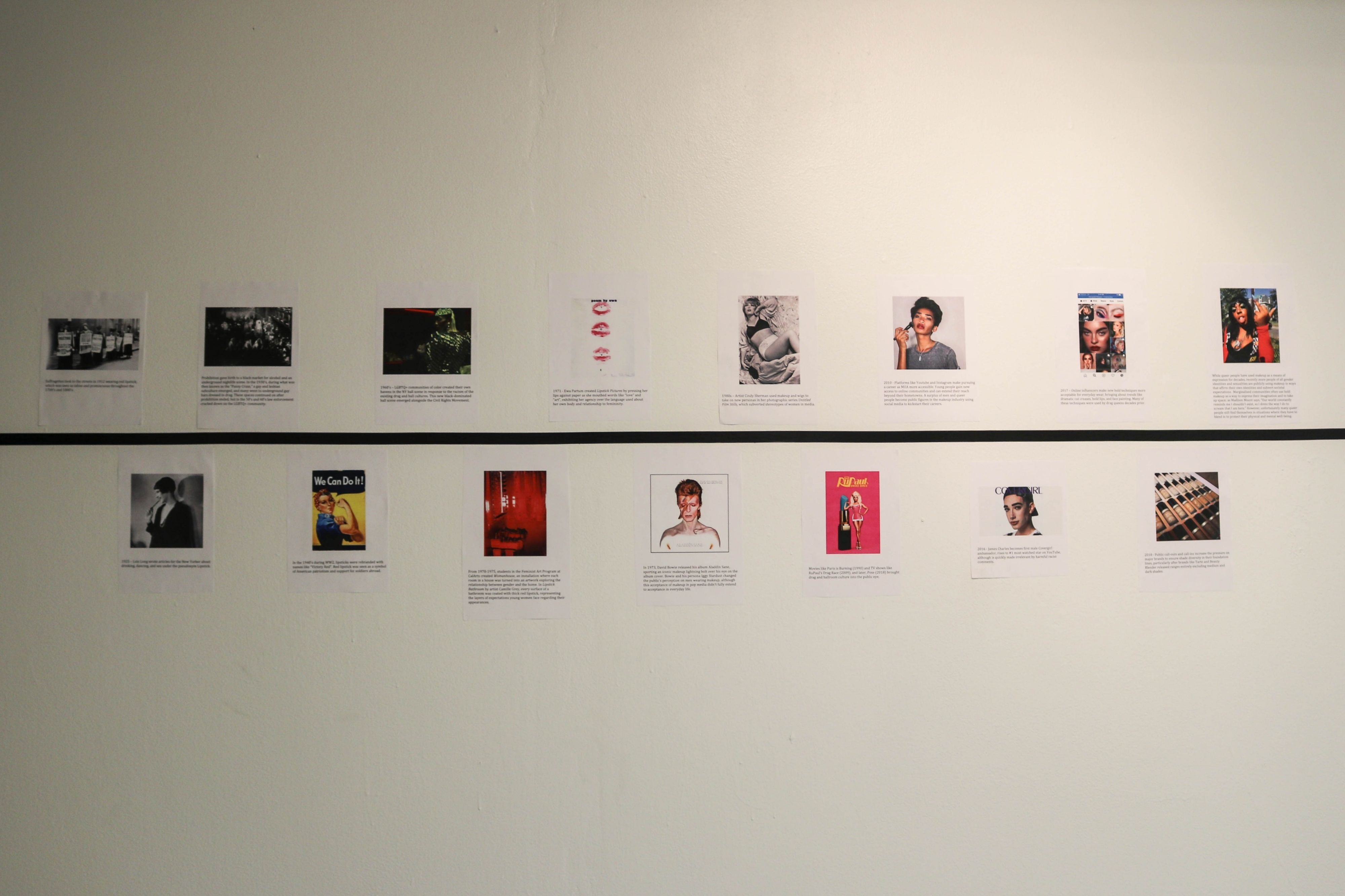 Face Value attempts in part to validate and historicize club culture, drag, and queer nightlife of the present LGBTQIA+ community. If you haven’t heard already (and thanks to Emily for informing me), Fenway nightclub and gay bar Machine, best known for its kick-ass drag shows and 18+ nights, is closing this Fall. The building is to be demolished (due to age & deterioration) and replaced by a private student housing complex affiliated with no particular university. Around the same time just last year, Cambridge’s Paradise Bar also closed its doors. The past few decades in Boston have seen the same pattern, with few gay bars and LGBTQIA-inclusive venues left standing. In their 70s/80s heydays and beyond, these spaces were an indispensable refuge for the queer community, a safe zone free of judgment and discrimination experienced in the intolerant outside-world.

While societal acceptance and legislature have made decent progress in recent years, it’s no secret that queer-identifying individuals still face marginalization, prejudice, and violence every day. The closure of these historic bars and communal spaces, sometimes due to declining popularity and often a result of gentrification, may also reflect the different generation we are dealing with today– nowadays, LGBTQIA+ individuals connect most readily via social media and are increasingly welcome in general social venues. But then again, socially-progressive communities are mere bubbles within the larger, more-varied community: homophobia and transphobia still affect members of the LGBTQIA+ community on a daily basis.

I attended Face Value’s opening reception on the evening of August 3rd, which featured four amazing drag performances in homage to the decline in Boston drag culture outlets. At the stroke of 7 o’clock, people flooded the DAP concert space to watch the show, tossing dollar bills with sheer awe and encouragement as the talented performers strutted their stuff fiercely and unapologetically. Drag performers Mick Beth, Dragon, Lachrymose, and Akira Oni each had a unique attitude and hypnotic aura of power about them, with amazingly elaborate costumes and makeup unlike I had ever seen.