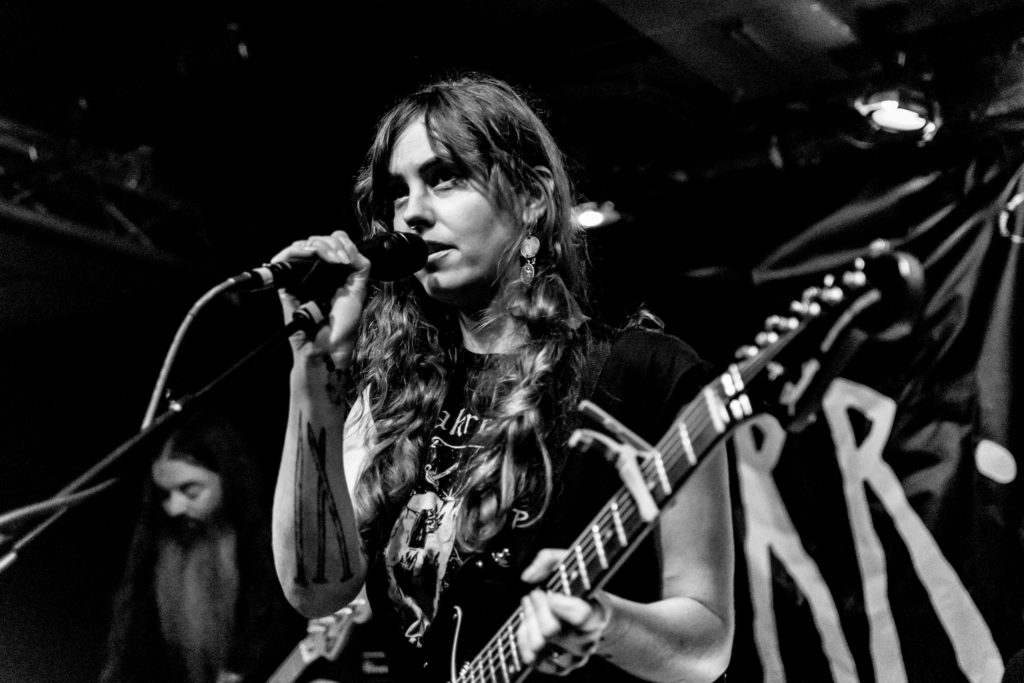 Under the watchful gaze of a wonky-eyed Elvis bust, Emma Ruth Rundle threw a guitar strap over her head and demolished the audience. There was a late start due to some technical difficulties. Regardless, Rundle and Jaye Jayle brought thunder and sparks to the stage of Allston’s Great Scott last Thursday night.

Jaye Jayle opened with the deliberate beating of As Soon As Night. From a repetitive structure, the band peeled off into eddies of synth, tense guitar solos, and brief pay-offs adding depth and interest to the initial steadiness. The set was marked by bass that felt like a heavy footstep and lyrics that emphasized the push and pull of freedom and responsibility.

As the lights came up, the crowd moved back towards the bar and the TV playing the Sox game. A merch table was decked out with shirts and prints of illustrated nooses, skeletal bodies, and horses. The prints were made by Emma herself, influenced by the animal her latest album is named for; a muse for the contradictory nature of freedom. Lights dimmed once more and the crowd pressed back to the stage to find a new figure washed with warm stage lights. Rundle began with a quick thank you and then proceeded to play her face off. The chemistry with the band was obvious. All performers of high technical caliber, their forays into the experimental had a strong foundation and were well received by a bobbing audience.

Rundle cruised through the new album. Her vocals stretched out from under the blare. She punctuated songs with brief understatements.

“This is for my sister.”

The show came to a close with an epic growl. Rundle pulled out a bow, pushed it into her guitar, and began to build the energy of the room once more. The band came in, simultaneously fueling and feeding off of the initial push. Then, together they took us down into the heart of the song. Rundle curled around her guitar and sang out to the mic from center stage. It sounded like copper. I don’t know how else to describe her voice. There was warmth and reflection and conductivity and ultimately, connection. It felt tangible. And then it was over.

Getting to watch someone so talented treat an audience with humbled respect and gratitude always makes me pause. We both think we’re the lucky ones when the lights come up. We both think the other is secretly wrong and that we were the one who got the better end of the deal. It’s hard to know who’s right but Thursday night, I’m pretty sure it was me.